ROON​
The Techno Union​
Camera shutters snapped at an alarming rate. Monitor droids buzzed and hovered around the grand hallway before one of Titan Industries' newest complexes, the GIGABOX. A massive facility planned to be built on Roon, the plans laid out by Alric Kuhn and his brilliance. It was a press gathering, as TITAN had released a statement earlier that day that there were massive leadership changes undergoing within one of the largest companies of the Galaxy.

A tall, strong black man entered the hallway, and the crowd of reporters standing before the podium gasped.​ 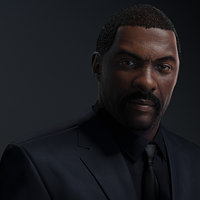 "The crowd is deadly silent. This is Tefraxis Obauldi, philanthropist and founder of Titan Industries. He was last reported dead in a duracrete accident on company property, though his certificate of death had never been filed. It was rumored he had left the company due to irreconcilable differences with the company's board of trustees..." One reporter began, but then began to silence himself as the man tapped the mic.​
Tefraxis looked utterly distraught, and a visible cut was stitched under one eye. There was a bruise upon his high forehead.​
"My name," he began to speak amid the deathly silence. "...is Tefraxis Obauldi."​
The crowd stood stunned, with only the cameras and the monitor droids breaking the silence. The Holonet was already trending this story. The entire Galaxy would see this. #TITAN​
"And I come bringing terrible news...."​
"...Alric Kuhn has been assassinated."​
Gasps. Cries. Alric was loved by many. This news was unfathomable, the man seemed a God to many. Protected. Too big to fail.​
"In an attack last night, the board of trustees, our CFO Shil Reathin, CEO Alric Kuhn and many of his friends were killed in a devastating attack on a Coruscanti facility."​
Tefraxis somberly lowered his head.​
"We were betrayed.... by the One Sith."​
Nobody knew how to even respond to this. Why? They profited so much from Titan Industries, a name that had become synonymous with the One Sith. It was known that even several of the Dark Lords of the Sith, and perhaps the Emperor himself had financially backed Titan Industries. Why would they turn on their own bread and butter?​
After all that Alric, Tefraxis, Tsavong, Mierin and Daella had done for them, why would they turn on the largest cash cow in One Sith territory?​
The Holonet was abuzz with confusion.​
"I have been in hiding, after my death was faked some time ago. The Emperor's demands had become too much. They wanted us to begin a new cloning program, to use Humans, Rodians, Yuuzhan Vong, and Twi'lek alike as slaves in their war against the Republic. I had declined, and was forced to fake my own death and exile myself into hiding. Alric faced the same proposition, and gave the same answer.​
Sadly, he was unable to escape as I had."​
Tefraxis paused, and continued.​
"I could no longer stand by in my cowardice. Through my original contract in the foundation of TITAN Industries, I have reassumed ownership of the company and have declared an act of emergency for all Titan Industries employees. 9 hours ago, Order 7089 was passed to all branches in the One Sith Empire's territories. Destroy as much as you can, in a reasonable time, and escape.​
Your lives come first.​
The One Sith are coming. They have promised retaliation. Their worlds are not free worlds, as they have portrayed.​
Their market is not a free market, as they have portrayed.​
Their propaganda is a lie. I have stood before their Emperor. I have stood before their Voices.​
They are all liars. They will deny everything, and take as much as they can by force.​
My heart goes out to all TITAN Industries employees in One Sith space, and I plead to all galaxy powers - the Lords of the Fringe, the Galactic Republic, the Primeval, our gracious friends in the Techno Union, to anyone who can help.​
Offer safe passage to our people. Offer sanctuary to those who flee this tyranny.​
Today, the liberty of the free market under the One Sith regime has died."​
Tefraxis left the podium.​
Another spokesman came to tell everyone that as Titan Industries scrambled, investors should be made aware that there are already plans between TITAN and the government of the planet Roon to move the headquarters of Titan Industries to the new GIGABOX factory.​
Furthermore, that all One Sith assets that could be moved were being moved as hastily as possible to TECHNO UNION space.​
He further assured the families of the TITAN INDUSTRIES employees that they would try their best to get everyone home safe, and there had been several holonet sites erected to keep track of who had been mustered by the company as safely home.​
The press release ended, and the crowd was left stunned.​
* * *​

An Undisclosed, Private Location On Roon - Hours Later​
Tefraxis was washing his hands in the bathroom. He wiped them gently on one of the decorative towels. He never understood decorative towels.​
Hated them, even. The man had no use for art in his life, nor decoration. Only efficiency.​
A small voice squeaked in the dark corner of the room.​
"Oh yes," Tefraxis smiled, throwing the towel on the floor and walking towards the darkness. He illuminated the dark corner with a bioluminescent globe of moss. "You..."​
The light shined on the face of a Selonian, frightened and afraid.​
Tefraxis reached up with his other hand and began to pull at his face, the skin of his cheeks stretching and ripping off with utter pain. He began to roar in the Selonian's face as his eyeballs, his irises, his eyebrows and his hair all began to rip off in a giant clump of flesh, revealing red skin and obsidian tattooes beneath.​
"...have much to tell me, Mr. Reathin."​
The Selonian would squirm, but the Embrace of Pain would squeeze tighter, and Tsavong would smile.​