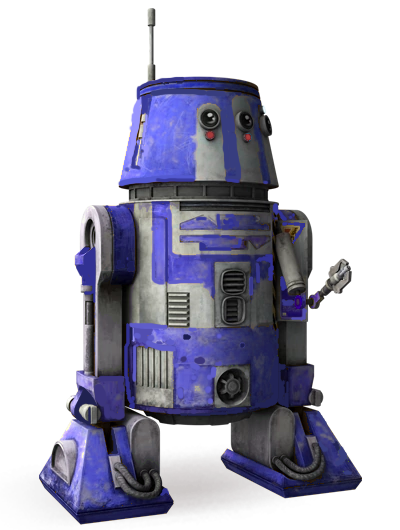 ​
R4-J6​
R4-J6 has been Josh's partner and co-pilot since Josh was in his early teens. Bought for him by his first Master as a gift in order to accommodate for Josh's lack of flying ability at the time, R4 has been a loyal companion to Josh throughout his childhood, and his adulthood. The two were separated when the first Final Dragon had been destroyed with R4 on it, but it's parts and it's memory core found it's way back into Josh's hands in time and he was able to repair and reunite with the R4 unit. The droid is getting a little rusty, and malfunctions at times as Josh refuses to give it a memory wipe, due to it's dislike of the idea. But R4 is still as loyal and versatile as ever.​
Of course, it's lack of a memory wipe has led to it developing a bit of a snark-driven personality, and it has been known to delivery a fair amount of binary sass.​
​
HK-D9​
Josh found himself with quite a bit of free time after first leaving the Republic and going into hiding. When he wasn't clearing his mind, learning and training, Josh took a hobby of learning from trial and error how to build droids from scratch. Finding some old HK parts in a ruin he had been exploring, Josh spent the next year trying to build the droid from scratch. By the time he had become ready to rejoin the galaxy at large, the HK unit was in a semi-complete state, moving around and serving as a house guard despite being very unstable. Josh continued to learn by trial and error, though eventually at the urging of [member="Shmi DragonsFlame"] he at least looked up a manual eventually that he could learn from.​
A few years into married life and spending more time at home, Josh was finally able to complete HK, and the droid was eager to finally be able to accompany it's Master on his adventures. HK is brutally honest, for better or for worse.​
BL-86​
http://starwarsrp.net/topic/105493-saotome-ptd-droid/​
The Saotome P.T.D Droid is designed for both protocol and combat purposes. It serves both as a translator and source of knowledge for Josh and his Padawan crew on missions, as well as serving as a training partner to keep himself and his students sharp.​
SD-91​
http://starwarsrp.net/topic/78754-sasori-dadoria/​
The Sasori Dadoria unit's purpose is to keep The Final Dragon in ship shape, conducting repairs as necessary. Unlike the other droids, it does not tend to accompany Josh outside of the ship, and will generally remain in the hanger or on the ship itself, doing repairs and maintenance.​