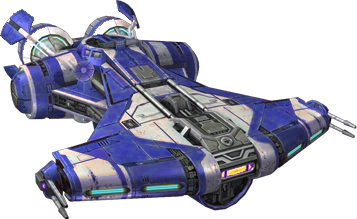 The Final Dragon (Destroyed)​
Joshua formerly owned a YT-1300 Light Freighter known as the Final Dragon, but it was destroyed in the bombing that presumably killed him, being nearby during the time. Currently uses public transportation, but is open to building or buying a new ship should the opportunity present itself. His companion and former co-pilot, an R4 unit by the name of R4-J6, was also destroyed in the bombing as he was inside of the Final Dragon at the time of it's destruction. DragonsFlame at the time had a few memories of the ship, just enough to recognize it's model and name, but nothing else. With that, he was able to have a new ship commissioned, the Final Dragon II, in it's likeness, and R4 was also rebuilt.​
The Final Dragon II (Retired)​
The Final Dragon 2.0, also known as just The Final Dragon, is a heavily modified ship based off the blueprints of a YT-1300, though built with much better parts, is bigger then the average YT, and has much more features, heavier weaponry and is much sturdier then it's much older counterpart. New upgrades from the old Final Dragon include a bigger, more advanced cockpit, some heavier weapons, a few more turret bases, some being on the top of the ship, a small kitchen, a bar, a Master Bedroom with a stabilizer due to Josh's sleeping issues during sleep travel, a droid recharge and care base, a meditation chamber that also has a stabilizer, among other things. This ship is basically Josh's home away from home, and due to how long his trips can be, he has fitted the ship, built from scratch out of his own pocket, with every resource to match this lifestyle. The paint job resembles the old Final Dragon. The primary color is a solid dark blue, and the trim and secondary is a dark red. Josh tends to pilot the ship on his own, aided by his droid, R4-J6... But R4 can also fly the ship on his own, allowing Josh time to prepare for missions, sleep, or meditate, as well as socialize. Josh tends to offer his bedroom to guests as a courtesy, and sleeps in the meditation chamber should the bedroom not be available to him. Retired in favor of the Final Dragon III.​
The Final Dragon III (Active)​
http://starwarsrp.net/topic/103331-saotome-light-corvette/​
Saotome Light Corvette. The ship should allow individuals that received it to be able to move independently in the galaxy as well as have some sort of firepower in an ambush while using the ship. Swapped in as his main ship while retiring the Final Dragon II.​
The Dragon's Nest (In Reserve)​
A Jedi Training Cruiser, otherwise known as The Crucible, meant as a personal training vessel for Josh and his Padawans. Perfect for training missions. Earned during the Republic war against The Sith Empire &amp; The Black Sun. In reserve.​
The Burning Blade (Reserve)​
Republic Paladin-Class Corvette earned during the Republic war against The Sith Empire &amp; The Black Sun.​