A First Look at Darkness of Bogan

Continuing the preview series for Galactic Illusionary Gaming's upcoming expansions, the company is pleased to officially announce the next major expansion of Age of Chaos: Darkness of Bogan. Created in direct contrast to Age of Chaos: Light of Ashla, Darkness of Bogan is a set dedicated to the evil and darkness that lurks in the galaxy. Sith, dark cultists, Nightsisters and more will appear within the set and below are a few cards to showcase one of the overarching themes of the set: 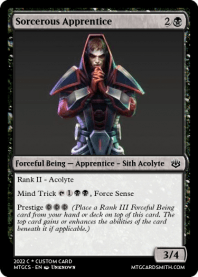 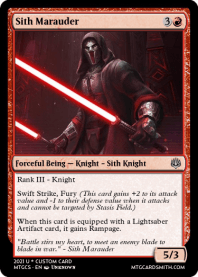 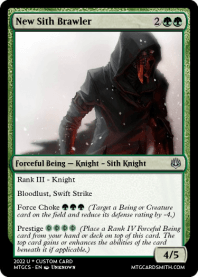 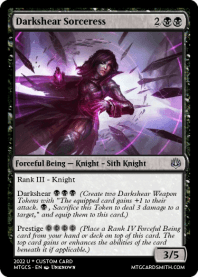 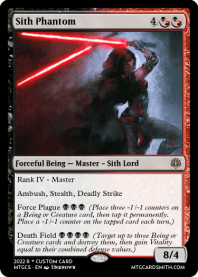 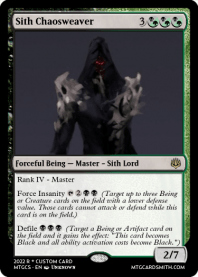 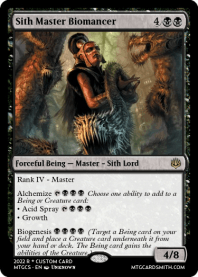 Much like how growth was a major theme for Light of Ashla, Darkness of Bogan has a similar theme, but in keeping with the more twisted philosophies of the dark side, the design theme for the set believed Evolution and Alteration would be the cornerstone of the set, and the key mechanic to achieve this is Prestige. Prestige acts much like Ascension except for two key differences; the first is Prestige, when it is used, will enhance certain Force Power abilities of the cards whenever a Forceful Being card of the next Rank is placed on top. A classic example would be as follows: 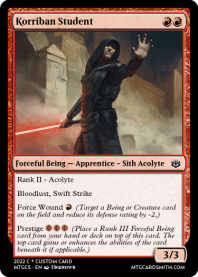 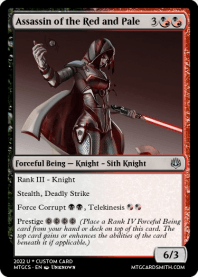 When the player uses Korriban Student's Prestige ability to place Assassin of the Red and Pale on top, Assassin of the Red and Pale gains Bloodlust and Swift Strike as usual. However, instead of gaining Force Wound as an ability, the ability also Ranks up to Force Choke with a correlating increase in activation cost. There will be several Force Power abilities and keywords that will be subject to this enhancement, and a future list will be provided in both a future preview and in official rulebooks. The second difference from Ascension, as also keeping with the ideologies of the dark side is the introduction of a brand-new mechanic to pay for an ability or potentially even a card's summoning cost:

Unlike with regular energy symbols, these new symbols that will be exclusive to dark side affiliated cards allow the player to either pay with energy as usual by tapping their Base or Biomes cards, or they can pay the cost by paying 1 Vitality point for each symbol instead and thus allowing players to sacrifice Vitality if they don't have enough free energy to use Prestige or other abilities that might have the new Bogan Energy symbols.

As a final part of this preview, we would also like to inform our community that several cards from previous sets, much like with Light of Ashla will be getting reprints along with some alterations to both ability descriptions, colors, and summoning costs. Those that own cards that are being reprinted are once again encouraged to visit your regional or sector distribution hub to receive the updated copies in exchange for your older ones. Some of the reprinted cards are: 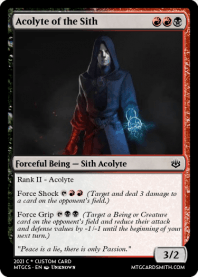 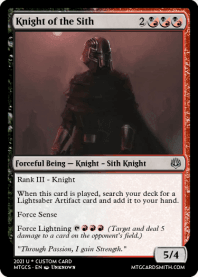 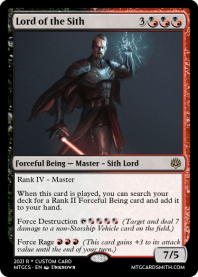 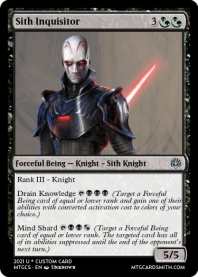 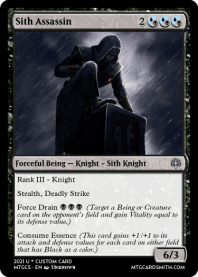 We hope you have enjoyed this first preview of Darkness of Bogan, and we here at Galactic Illusionary Gaming look forward to revealing more cards, mechanics, and how Evolution and Alteration will continue to influence this expansion in the coming days and weeks as we draw closer to our release date.​
Reactions: Sinara Thorne, Darth Ivum, Ishida Ashina and 11 others