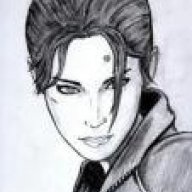 Forecaster made her way through the crowd, her head low. She was trying to unwind. It was moments like these that she learned just how alone she was in the galaxy. Few friends and no one to call her own. She always disregarded it though. Why would you need friends when chaos always remains? It was always her way; to look at things from the logical and scientific standpoint rather then the social and otherwise "common" view.

Eying the upcoming bar she sighed with relief. Drowning herself in whiskey was always a great thing. Walking into the crowded bar she made her way to the counter. Ordering an entire bottle of whiskey she grabbed a glass, along with the bottle, and made her way to the corner booth. A place that was darker then the rest. Siting she examined the place. Coruscant was known for idiots in places like this. Though tonight she didn't care much. Slowly she started drinking. She hoped someone would walk in and help change her current ways. Though she doubted this would happen.

Belle had never been to Coruscant... No she had always fought the Republic but with the Inquisitions fall and the empire sending Vazela that rabid dog after them as traitors. There was not much left to do and that is why she had run. Her vengeance tempered by the solitary need to survive and to back them back. Her life had been one betrayal after another and now... now as she stood breathing in the Coruscant air a sense of calm washed over her. The leathers and her saber were a reminder of her past but she could still use them. She was an Imperial agent meant for observing, then her people were fired on and she became a sith. Now she was free truly free and had been taken in by the commander.

The rest of her path led her here, to the bar and the people. She wasn't one to let her hair down but that was because all she had ever had were orders and the next mission. Now she had freedom and no idea what to do with it. "One whiskey neat please." Her hand came up while she sat down and popped her neck taking in the bar with her one good eye briefly while the cybernetic scanned everything closer. Looking for what? Jedi? That was one thing she didn't want to have to deal with but it was a danger here. She couldn't hide wha she was just not get involved in things would be the best way.

As Forecaster took another large gulp of her whiskey she turned to see a new patron at the bar. Beautiful but Forecaster could tell she was more then just that. Examining her for another moment, she raised her hand for the girl to notice. She waved her over. Forecaster just wanted someone to talk to right now. Someone else drinking whiskey with was the right person to talk to.

Belle turned her head when she saw someone flagging her down... Or trying to signal her for a moment. Her eye scanned the girl taking in her looks and while the ghost image of Xalia was gone. It was never gone for long and she stood up moving to sit closer to the woman. It was an interesting look and what better way to blend in then to be with someone. Nothing suspicious about that. Her head turned a little holding the glass. "Hello there, I am Belle."

Forecaster flashed a small smile as the girl, who she now knew the name of, sat down. "Pleasure to meet you. I'm The Forecaster, although you can call me Forecaster." Most people hated her name. Though she didn't care what others thought. In her mind a name was just a name, no value to it.

"So what is a force user with a grudge against the Republic doing here?" Forecaster saw the signs of her not working with the Republic. She could also feel her presence in the force. The presence of a knight never goes unnoticed by other force users, even an apprentice.

Belle let her eyes flick over while a small tight lipped smile came to her face, then slowly it became a smirk while she set the glass down. Did she have a grudge against the Republic? Not really... she disliked it, the corruption, the chaos, the lack of order and discipline but she didn't hate it like that. She hated what the sum of its parts made it. Though explaining that took more time and was a product of her upbringing in the empire, her training with the Imperial intelligence, Sith inquisition and now herself.

"I don't... have a grudge against all of the Republic. I might dislike parts but there are a few things... There are these wonderful bars where one can see promising women. There are wonderful shops and places you can explore or train while waiting for the proper moment. Don't you enjoy that Forecaster?"

Forecaster nodded with a small smile. She, in truth, hated many social activities. However it was on the grounds she never had anyone to go with. She had few friends and even the ones she did have she didn't trust. In her mind everyone was an enemy and friendships were burdens. "I don't know," she admitted. She lowered her head with sorrow. Her voice also lightened. "I don't have anyone to do anything with. My whole life is one tragedy after another and every friend or family I've ever had always die in front of me." She raised her head, trying to regain her composure and confidence. "But I don't need them. I have the force and she is the greatest friend one can have."

The small reveal was... saying a lot, it got Belle to turn her body to fully take in Forecaster but more so that she could place a hand on her shoulder. "It is alright, tragedy defines us, forges us and the force makes us what we are. We all have a past the trick it to use it and learn rather then be burdened by it. As for the rest well no hanging your head down like that. Your a force user, a cut above the rank and file and someone who is better, a goddess among the insects my dear." Belle had heard the speech once before but it was true, by the extension of simply being a force user Forecaster had more advantages then others, she was already better and that was something. "Now lets have another drink and perhaps I'll get you to enjoy social events."

Forecaster nodded as she poured more drinks for the two of them. "What did you have in mind?" She was new and she was nervous. She never had anything to do and this was the first time she was talking with someone without being attacked by an enemy force. She liked the sound of that.

The thought of all the things they could do came to mind but first Belle took a drink and stood up moving her hand gently over to Forecasters. "First we get you to loosen up and enjoy the moment. As with everything if you think to far ahead you'll never get there. if you look to far back you'll never want o move forward. So stand up and we'll dance. First after some liquid courage." Belle went back to the bottle and held it for a moment as she poured another glass drinking it. "Now come Forecaster, if we live in this moment there won't be any regrets."

Forecaster was hesitant. She wasn't a good dancer nor did she enjoy it. However Belle insisted so she went with it. Standing she moved with Belle over to the dance floor. She was nervous to say the least. Looking at others for a moment she sighed. "How does this function work?" The only words Forecaster knew was work words. This would be hard. Then again it would be worth it.

Belle stood there for a moment wondering if she was being serious but not wanting to say it. Her hands came to the girls shoulders as a slowly song came on and she guided Forcaster to hold one hand on her waist the other shoulder. While Belle mirrored her eyes looked into the face of the woman. "Is this your first time? Oh Forecaster, this is one of the ways it functions. The others are a lot faster. Just moved from side to side gently and hold onto me." The small smile that came over her face showed in her eyes, the cybernetic one couldn't show the warmth as needed but it would be enough. She might be evil but this was a fun moment.

Forecaster nervously followed her instructions. She hated to admit it but, "This is my first time ever participating in anything social." Forecaster sighed and contained to move back and forth.

Looking up into her eyes she smiled. She was having fun for the first time in awhile. She had also found someone who, she thought, she could connect to. But she didn't want to jump to far ahead.

"Well then we will have to change that." Belle kept moving gently and paid close attention to Forecaster offering a returned smile. The girl had skills elsewhere is all it meant but there was nothing more fun then enjoying company before the next fight or battle. Her presence in the force even told her what she might be able to do. "But there is also more to it? Something I am missing? Would it be to forward to ask what you do? I was a member of the inquisitorious."

Belle continued to look at Forecasters face and breathed in deeply shifting to only bring herself a little closer. Her eyes studied the girl and her hand came up gently to over hover her face from the shoulder. "So much though in that head of yours, just breathe and move to the music. Your body knows the steps Forecaster, it is only a matter of letting it move while your eyes enjoy the scenery."
You must log in or register to reply here.
Share:
Share
Menu
Log in
Register
Install the app
Top