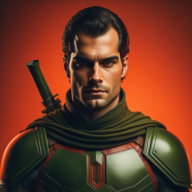 Waylon Mereel - Pay Me to Care

APPEARANCE:
If worn and sand blasted leather and care-smoothed silver had a sentient body, Waylon would be it. There is a perpetual scowl and his voice, when heard, comes out a dangerous growl, reeking of irritation and impatience. His green eyes and stately silver hair might make him handsome to most, if not for his attitude.

BIOGRAPHY:
An elderly and accomplished ori'ramikad from House Mereel, Waylon has kept to himself for decades, quietly working the Outer Rim and resting from a youth some will whisper should have made him A'lor if he had wanted it.