Walking the path of Darkness. 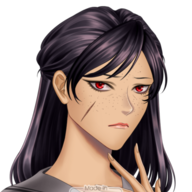 Yandi sighed softly, she had ended up joining the Sith but had yet to find a mentor. For now she had wondered into the dungeon. Why? she really did not know but she felt the need to go down there. Not being in a crowd of people for a change was nice, Well not so nice but she hated being around to many people. Normally that ended in her hurting and or killing someone. Her eyes always red held a glow like the flames of a fire, they almost had the same movement at time. As always her long black hair was pulled back. Back on some of the planets she had been on she was a wanted killer, who most simply knew her as The Black Cat. Nobody knew her name, she had never told anyone her name. Nore did she plan to, Yandi was a cold rock of hatred and insanity that people tended to avoid. So when she had found out she was force sensitive, and heard of the Sith and there ways she sought them out.

The dungeons the girl would find had been reconverted to their original state. Torches, stone and wrought iron cells instead of energy shields. There was no fun otherwise and the interrogator at the lowest depth of it sat in the chair while she rocked a little. A knife in her hand while one man remained tied up against the wall, her eyes roaming over him brought a smile to her face as she stood up and moved towards him. Shinju finally let her eyes flick to his chest before she slid the blade down making a crescent shape slice that bled. Shallow cuts would let the blood run free and now her eyes observed someone walking near her. "My my, welcome to my parlor." Her smile became wide displaying all the madness and malicious intent she had towards what was going to come next.

Yandi looked at the man then at her then back at the man, a small smile crept to her face "so what did he do to tick you off? or ya just doing it for fun.. its alot better killing for fun" she said with a soft laughing. she turn her blood red eyes back to her " where exactly am I? I felt drawn down here but i'm not sure.. The smell of blood also spiked my curiosity" @[member="Shinjū Aÿasha"]

Oh she was so precious and Shinju laughed. What had the man done to make her angry? Nothing he was here and had been brought. No need to be angry she was just doing this to help him to make him understand the glory that was serving the Emperor. That was the point after all, one needed to serve to be better. They were helping make everything better worlds. Her face remained on the girl while she brought her hand up offering the knife. "Come on little one, have a go. Make him sing and enjoy the moment. There is nothing more enjoyable then the thrill that comes from slicing into a person. If you were drawn here to me... Then you must be wanting, and I am not one to deny my teachings to another."

Yandi took out her own knife " i got my own, id rather use it" she said walking over to the man and not even thinking of what to do she dug the two teeth on the end of the kinfe into the mans leg and roughly ripped it down the calf of his leg. @[member="Shinjū Aÿasha"]

Shinju looked upon her and clapped walking around then crouching lower and lower. "Ah ah ah gently, we want it to last, if you cut to deep he'll bleed out my dear. Cut to shallow and he will barely notice it, the secret is to press just enough to give force but not enough to be forcing it. Takes only a small amount of pressure o slice flesh and oh your going to learn so much. Now raise it up and run it along his chest then carve your name into him."

" i just enjoy the smell of blood" Yandi said moving her blade to the guys chest and slowly carved her name into his chest. once done she simply licked the blood off her fingers. " everyone's blood tastes different. " she said licking her lips. @[member="Shinjū Aÿasha"]

"Oh you are a treat, were you older I might just have some... surprises for you." Slowly Shinju brought her finger to the mans chest getting the blood on it then bringing it to her lips. Her gloved hand was licked clean and she spoke offering a smile to Vex... Oh she was so wonderful already. "Well then my apprentice, we'll enjoy the taste of blood together yes. First a small taste and if your good." Slowly Shinju held her knife and barely cut herself, just enough at her neck to bleed but not enough to sever. Her head tilted to the side to expose it. "Go on drink and I shall teach you all about the darkside my sweet."

Yandi blinked looking at the blood on her neck, shes never tasted blood from someone she had not hurt in some way before. Slowly she reached up and got some of the blood on her fingers before she moved back and sniffed her hand before licking it off. She never thought twice about licking any blood off her hands, she enjoyed the taste if it. @[member="Shinjū Aÿasha"]

Shinju let her hands wipe and press on her neck to get the blood. The girl was so lovely, so wonderful and now... Now her hands came out grabbing Vex before moving away. Moving deeper into the dungeon until there was only light from a few torches flickering across the walls. "Very good and now comes the lesson. I want you to throw into that man... Well any of them them your blade. Use the force to guide it and stab them"

Yandi looked at her blade the one the people on the wall, she wont entirely sure how to do as she had been asked but she was pretty talented with throwing her knife. So she did and with a quick movement she flung the blade and it hit the shoulder of the one she had aimed for. @[member="Shinjū Aÿasha"]

Shinju clapped at that and looked her apprentice over, oh she was already skilled but using the force to hurt people was all about the will, now this one had the resolve to cause pain but. "Tell me what else you enjoy little one? Do you like plunging a blade into the heart of someone? Do you enjoy the look in their eyes as the life slips away?"

" anything i can do to kill I'm happy with it.. sometimes i do it for fun, Or if someone really makes me angry." She said shrugging " that's why I'm wanted on a few planets for murder.. Nar Shaddaa is one... someone really made me angry so i blew the place up" @[member="Shinjū Aÿasha"]

Shinju just kept smiling while her hands went to the girls shoulders and she laughed. "Well then that is the way to go about it. Your a sith but more importantly you are my apprentice and that comes with certain perks. For one my sweet girl... We have all the people down here who are ours. To do, to kill and to play with however we want, want to practice your powers. Then be my guest."

she smiled " then i think im going to love it down here.. plus its dark and creepy. The kinda places a Cat could hide and stalk her pray" she said laughing ever so softly. @[member="Shinjū Aÿasha"]

"Oh you are so precious... I could just eat you up." Shinju leaned into and hugged her apprentice while she grazed her teeth upon the girls neck. It was something predators and this was hers now. her apprentice who could tear things apart, who could gut the prisoners and. "Well then we shall play and I want to see my Vex dance in the blood of the prisoners."

Yandi smiled and laughed " now that sounds like fun. " she said with an insane smile. " will i get to blow anything up? oh i do enjoy watching things explode! expeshely if its full of people"

"Oh yes my sweet you can blow stuff up if you want. I shall teach you to rend flesh from bones and." Shinju let it trail off while she laighed leading the way to a room where several were hanging above the two of them. Their bodies attached to the pillar in the center of the room with wires and hooks. All connected into their skin. Shinju placed Vex on the one side and kicked the release as screams came and she began to dance around with the blood splatter. "Open yourself apprentice, open yourself up to the scream that echo here and eat it in. Use it to fuel your power."

Yandi joined her and laughed " Now this i like!" she smiled as she spun around happily letting the blood run down her face and licked off what ever got close enough to reach with her tong. @[member="Shinjū Aÿasha"]

Shinju continued to dance with her apprentice in the dripping blood in the carnage that would be coming while she clapped. Her hands smeared it along the length of her body covered suit. It was perfect and then her blades came out while she made more cuts. "Go on apprentice slice them up, it doesn't matter to the ones in this room they are food, they are meat. Soon I will be showing you how to interrogate."
You must log in or register to reply here.
Share:
Share
Menu
Log in
Register
Install the app
Top