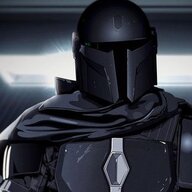 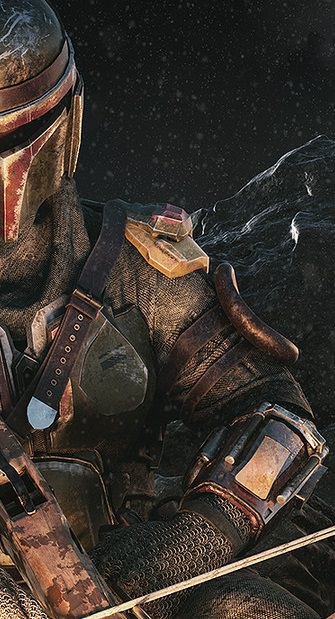 ​
Name: Vykar​
Cultural Heritage: Mandalorian​
Clan: Khel​
Homeworld: Onderon​
Occupation: Beastmaster​
Residence: The Beast Moon of Tandral IV​
Height: 6' 3''​
Weight: 214 lbs​
Eye Color: Amber​
Hair: Shaved​
​
Strengths:​
​
Vode An: He's Mandalorian, thus making him one of the toughest warriors to ever walk the galaxy.​
Khel Legacy: Like all members of his clan, he's a beastmaster. From tracking hounds to the truly dangerous, near mythical beasts of the galaxy, he's hunted them, tamed them, or turned them into hearth rugs.​
​
Weaknesses:​
With Pride Comes the Fall: He's Mandalorian. Even if there's a certainty chance he'll lose, he'll likely pick the fight anyway.​
Ruthless: Mandalorian honor is a peculiar beast. Pardon the pun.​
​
Appearance:​
Mandalorian.​
​
History:​
Most are at least familiar with the upbringing of any Mandalorian child, so it's safe to say little need be writ down. Instead, perhaps, allow me to remark upon the history of the Khel Clan itself. Formed in the time of the Old Republic by a man who became Mandalorian rather than being born one, they have, ever since, had a long history as men of the beasts. They started out small, primarily offering out the services of their tracking hounds. From the time they're able to walk, members of the Khel lineage work in the kennels. It's their first introduction to how dangerous beasts can actually be.​
​
This isn't to say the young are - literally - fed to the dogs, but as they're hunting hounds and tracking beasts, they're far less likely to take kindly to roughhousing with children than your typical canine housemember. More than one Khel has lost a finger or hand to a defensive hound, and several have been killed.​
​
So it goes.​
​
But, as with the upbringing, so too the beasts. As the member matures, they learn to take on greater and greater beasts. Once they're suitably skilled at tracking and weaponwork, they begin to go along on hunts. From there, it's a matter of training to tame the greater beasts. These vary, based on the region of the moon, but it's not uncommon for the Coming of Age to involving raising a particularly aggressive creature like a Gundark or asserting your mastery over a Jerethian clamberwolf.​
​
In time, these beasts are sold, or contracted out with their handlers for a mission.​
​
The Khels, in adulthood, are Beastmasters, Big Game Hunters, Trappers, Traders, Fishers and many more things beside. This is the life Vykar was born into, and this is the life he leads to this day.​
​
You must log in or register to reply here.