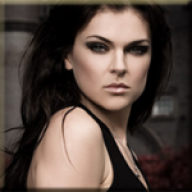 STRENGTHS AND WEAKNESSES:
SHIP:
Instead of a ship, Valeria is the master of a star dragon - Mer'ax'ys, Lord of Flame. Twenty metres long and capable of making hyperspace jumps, Mer'ax'ys is truly a mighty beast.

BIOGRAPHY:
Valeria, born on the planet Kira Prime, was raised to be a proper high-born lady, with correct manners and proper behaviour. However, being Force-sensitive, she was soon found and preyed on, not b the Jedi or Sith, but a malignant Star Dragon, chosen as tribute to the beast's powerful will. Its evil corrupted her, twisting her mind, until they were bonded through the Force. However, the strong-willed Force-sensitive resisted the malignant star dragon and freed herself from its curse, becoming its partner, its equal - and, over time, freeing it from the need to feed.

She wandered to become a Jal Shey, to learn the arts of forging metal, to creating gear and items - especially blades - that were imbued with the Force. Once her sect of Jal Shey collapsed, she found her way to the Je'daii, where balance was more important. Now, she aims to be their greatest forgemaster, the creator of a thousand blades.
KILLS:
N/A

Okay. I hate to do this to you all (actually, I don't), but all the replies to this are being deleted because a) I hate profile clutter, b) IC banter in my profiles and c) I need a second uninterrupted post.