Under a Black Sun 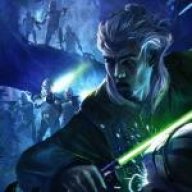 The days, weeks, and months went by, and the young padawan Jak had yet to be chosen to work as an apprentice under a Jedi Master. He sat outside of the Council room as a young Master approached him from the closing doors and delivered the sad news once again. The Master said "The Council has however given you the option to go to another branch. Perhaps the Healing Circle might fit your needs?" Jak quietly replied with a shake of his head. The Master reached out, about to say more before Jak was on his heels and out of the chamber. He looked at his feet all the way back to his chambers. What can I do that would make a Master notice me? And it finally hit him. He had a plan. Jak packed a bag and took a hover train to West End Spaceport.

Jak pushed his way through the large crowd to a door that only he had the key to. He smiled as the door slid into the wall, and at last Jak took a step in and gazed at the shadow that was created by his ship. A Maka-Eekai L4000 Transport named Out of Touch. He eagerly boarded, punching in the coordinates to the most wretched hive of scum and villainy in the galaxy. Nal Hutta, the capital of the Black Sun criminal empire.
[background=rgb(19,19,19)]::Find a way or make one::[/background]
You must log in or register to reply here.

Even a Black Sun Sets...