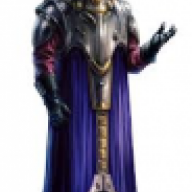 STRENGTHS AND WEAKNESSES : First off one of the weaknesses of Timir is putting himself out there so to speak as well as being a socialite ,but when forced to work with or for others for his own benefit will work well. Secondly, this introverted nature is caused by another mental affliction that Timir has had all his life and as a result shows a lack of empathy, sympathy or charitability and is very cold and calculating, Toram does not make many friends or enemies. As well as this, he was born very large thus compounding his need for heftier equipment and pressure suit so naturally Toram lacks finesse and speed but can still hold his own in a fight if the need arises. Timir has a good understanding of weapons and always keeps a blaster-rifle on hand slung across his person as well as special modifications hidden within his pressure suit.

Strengths: Being a Skakoan, Timir is in his nature highly intelligent and resourceful as a result he his highly versed in the ways of Engineering, Building, all sciences and culture. Another strength he can be associated with is his knack for understanding computers and micro-systems as well as other forms of artificial intelligence (Droids). Timir is a good pilot, but is only limited to flying large freighters and capital ships (Don't expect him to be in any snub fighter!, he would scoff and say "That's what Droids are for!"). His great size naturally gives him good physical strength, not better than a Wookiee or a Binary load lifter but he can get the job done. (Timir is very ambitious and thus arrogant at times! He also finds himself a victim of wit and cunning meaning to say he can be fooled often times and is prone to sheer BAD-LUCK)

SHIP: Timir's personal ship is a very old and very ugly freighter that had been dumped as military surplus on the Industrial wastes of Vulpter where it was left to rot away. Coming upon it when he was left stranded there on a salvaging expedition (he had a "misunderstanding" with the captain) he rigged it up and he's flown it ever since, only ever dubbing it quite ungracefully, "The Rusting Hulk". Even when offered something better, he always seemed to have some odd attachment to it that has made him keep it.

BIOGRAPHY: Born to an enterprising but neglectful family on Skako, upon finishing his education he immediately set about doing an odd and seemingly insane move that no one he knew could predict: Venturing off world to study, travel and make his fortune building and salvaging technology and exploring the wild reaches of space. Toram never speaks of his young life, only stating that all it had been was "one contract and experiment after the other every so often being forced into exhile from forsaken backwater planetary government to the next". Indeed Timir had spent a great deal of his life working for various corporations and shipyards, building and testing droids, weapons, chemicals, ships as well as buildings. On occasions when he experimented there would be the occasional mishap and lets just say, he may or may not have incinerated the last habitable region on the planet Duro and it is still up to debate if he completely annihilated 5 species of the only possible sentient fungal species in the galaxy (How was anyone to know!?). Timir currently resides at a hideout...scratch that personal retreat and meditation/experimentation base upon the polluted planet Vulpter located in the furthest reaches of the Deep core, occasionally going offworld to scavenge and offer his services as a pilot or technician or general staff member at any place that will have him.

Character Bio
You should Join the LotF. good place to start.