Private To Flock Together Acantha Malvern​
Wearing: - x -​
Location: Drake Den, Netra'yaim; Krant​
She had been feeding the tuk'ata when she heard those unmistakable echoes. ​
​
Untombing Drake Den was no small feat. The boulder which blocked what was still half of a majestic door; now with a single, average humanoid-sized gap rended into it; was certainly tall and sizable, but also of unusually dense material. Few could move it without great aid from the Force, and fewer yet were allowed to outside of Damsy's presence. Of course she had designed it as such in both regards, thinking that the catacombs, for all their invaluably man-eating curiosities, needed more security than any door could offer. It was right and good that House Verd's Akaa'kalyr had taken a fast and intense interest in the wellbeing of her family's war beasts, as they were an integral part of the army.​
​
If possible, Keziah burrowed herself further under her keeper's waved hair towards her nape. "I doubt it's trouble, Kezi," Damsy muttered, wiping blood from handling the hound's meal on her tights. Not too much, she actually meant - just some poor sod that would soon know the wraith of the Siren of Krant was not restricted to the submarine. Damsy took to the nearest through-running corridor, relying on her wrist-mounted HUD to guide her towards the sounds continuing to emanate from somewhere. Or, something. They had morphed from the aches of rock against rock into soft chirps of a voice. While she couldn't make out the words, nor could the integrated AI, they sounded vaguely Basic.​
​
A series of muted but rapid blips of technicolor informed the sithspawn she had closed in on her mystery. It was standing in yonder alcove, one that thankfully nothing dangerous resided in. Spiders, strange-looking but benign, had made their home in one of the empty animal pens months ago and, when approached by a battle-brother about possible modes of extermination, Damsy had vehemently protested. She slid into cover behind a stalagmite formation encrusted with unhatched egg sacks. Ever so slowly, she peered around it and past hanging webs into the cavern.​
​
A young woman was within. Her side was to Damsy, but revealed enough for the latter to realize the former was not of the House. ​
​
But, for the first time since her defeat on Dagobah, Syreni was quiet in Damsy's mind. No mix of pent-up anger for the Legion, hate for her father, hunger for power lashing out at the undeserving. Porcelain white and jet black was the colorblock of peace and quiet and something else. Damsy canted her head. It knocked the word loose: kinship, real and true, through separate but alike genesis rather than honor-bound duty. Among sithspawn, not Mandalorians. Damsy put her hands up in a show of vulnerability more than surrender. She stepped into the alcove slowly, but announcing herself assertively enough: ​
​
"Hello, starfish." ​
​
"Who are you?" She barely even paused to receive answer. Instead, she blinked, trying to contain a ribbon of rage generated by her conscious half and directed at someone yet to be named. "A-and how did you get here? I told the boys no sentients in my Den."​
​
After all, a dragon was not a slave...​
​
nor a siren...​
​
or a harpy, either.​
​
​ 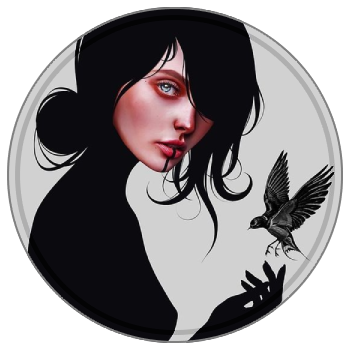 Damsy Callat ​
​
The heavy rock crunched across uneven terrain as it slid slowly out of place. Father had told her it would be difficult getting in here, but he had failed entirely to mention a rock a thousand times the size of Acantha. Even with her natural affinity to the force, it was a little heavier than she was used to moving. After a few minutes of intense concentration, she finally managed to eke out a gap big enough for her to squeeze through. Acantha blew a puff of air at the stray strands of raven hair covering her face, both the shadow and the beast mimicked one resounding thought.​
​
This had better be worth it..​
​
A warm, rushing breeze escaped the never-ending black the gap had revealed, and with it, it brought a thousand scents. Acantha stuck her nose into the air, inhaling them all deeply. An attack of new experiences filled her nostrils, which much to her surprise, incredibly excited the shadow. There was something far more interesting than animals buried within these depths. Something that she could not quite place but felt strangely familiar. Like walking into her own room after someone else had been rooting around in there.​
​
It urged her forward. Soon enough, she was being swallowed whole by the deafeningly dark caves. Only vaguely aware that her footsteps echoed loudly off the cool rock walls, Acantha pressed forward. If it were not for a dimly glowing light in the distance, she would have assumed that the caves stretched on for miles. Darkness had a way of doing that. Making things feel as though they were everlasting. Fortunately for Acantha, she had an extremely close and affectionate bond with it.​
​
The light was man-made. She could tell by its harsh white glow and the way it flickered ever so slightly. Father had said to expect strange and mysterious things in this cave, but he had made no mention of sentient life. As far as she was aware there was nothing in here save for some beasts of curiosity.​
​
As she came closer, the light opened out and pooled in perfect circles across an alcove, decorated to the nines with thick pillars of rock that hung by threads from the ceiling. Acantha tilted her head to get a proper look at them, but the sensation made her dizzy. Beyond that, the alcove had seemingly filled itself with a soft scuttling sound, like pebbles being dashed against marble. Acantha drew her gaze down to the spotlights, squinting to see past them into the shadows.​
​
“Oh!” Her sweet trill exclaimed into the darkness. A beast with several legs made its way around the edge of the alcove, clinging close to the sanctuary of darkness. Though Acantha herself was far from frightened of it, she was keenly aware of the fact that it was frightened of her. “Don’t be scared. This little bird does not eat bugs.” She did her best to speak in a soothing tone. It came far easier than trying to display a similar type of emotion to humans. She understood animals far more “You are completely safe! I’m just exploring.” The spider made some sort of clicking sound which pierced Acantha’s eardrums in a mildly pleasing tone. She took that to mean that it accepted her presence.​
​
Her shoulders were almost about to relax when another breeze brought that strangely familiar scent careening into her nose again. Acantha made no sudden movements and kept her gaze fixed firmly on the spider.​
​
It was not long before the sound of a voice cut clean through the silence Acantha had left behind. It belonged to a woman and an angry one at that. Acantha’s face immediately fell, but the stranger would not have been able to see this. Starfish? The shadow questioned in her mind. She blinked a few times to clear the thoughts that it followed with. “HelLllooOo, little chick.” She responded in a sing-songy tone. “My father told me I might like it here, so I flew here, on a ship.” Barrelling into an answer, and maybe providing an explanation, was the only thing Acantha could think of to calm the tint of rage in the stranger’s tone.​
​
“And I do not know who the boys are, but nobody told me that someone lived here.” Rocking back from her heels to the tips of her toes, Acantha continued. “I’m awfully sorry if I disturbed you.” Domino had told her it was good to apologise to people who were mad. It fell under the blanket of empathy, something which she was still attempting to grasp. She used the momentum from her rocking to turn sharply and face the direction the scent was coming from.​
​
Whoever it was felt the same way the spider did. They clung to the darkness too. Acantha did her best to smile. The same smile she used to make Domino smile. That was the friendliest face she could manage. After all, she did not feel threatened by the voice, despite the fact that it was angry. She was far too curious for that. There were only two people alive in the entire galaxy that Acantha did not want to consume. One, her Father. The other, Domino. Yet now…​
​
There was a third.​
​
Even the shadow was strangely placid in their presence. There were solid and tangible reasons for the other two escaping her monstrous hunger, but there was nothing of the kind for this stranger. In truth, simply calling it curiosity would be making light of the situation.​
​
“My name is Acantha." She stretched her smile out a little wider. "What’s yours?”​