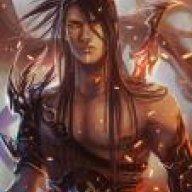 The recon variant of this armor is known to be the weakest armor, but also the lightest. While wearing this armor people will find that they're more free to move than the other two variants and able to fit into tighter spaces. This variant is made from Duranium which is a lightweight alloy, and it has a Dallorian coating to keep the armor cool under blaster fire or if being attacked by a lightsaber. The heat resistance also plays a factor if going through burning buildings. Like all the other Variants the HUD inside of the helmet was advanced. It could switch between night vision, biometric data, video recording and even giving them 360 degrees of vision.
Standard Armor:

The standard variant of this armor is just as it says “Standard” It's not much better than the recon armor but its not much worse than the Heavy gunner armor. This variant is made from hardened Duraplast which is coated in a Hadrium coating. This armor is the most heat resistant compared to the other two armor and soldiers wearing it can survive in vacuum for up to ten minutes. It is able to take blaster fire however the kinetic energy will pass through but it won't be as felt as with the recon armor.

Soldiers wearing this armor are basically tanks in their own right. They move slow, but they pack a punch. This armor is created from plates of Durasteel mixed with Duranium to create a lightsaber and blaster resistant armor. This armor can handle taking grenades, indirect cannon fire, and is fire resistant. It takes a lot more force even from kinetic energy to pass through this armor. Using microhydraulics the armor is more bearable as it gives wearers increased strength and eases the process of moving inside the armor. 1) The weights need to be increased. When compared to modern armor (and their intended roles), they are very underweight. I'd bump the Recon to about 15 kg, the standard to 20 kg, and the heavy to possibly 30 kg. The heavy armor is that heavy because, in your description, you describe it as a walking tank. 20 kg isn't a whole lot for what's supposed to be a massive suit of durasteel.

2) Can you explain why the armor would be less resistant to slug throwers than blaster weapons, especially considering that Star Wars blasters are almost are more similar to kinetic weapons than energy weapons? (Blasters rely on exploding gases, after all.) It would seem, logically, that if the armor can protect against blasters, it should offer similar, if not better, protection against slugthrowers.

As for the question about blasters vs slugthrowers the way I saw it was that blasters are weaker when it comes to kinetic force. For example if you read when people shoot blasters theres almost no recoil which shows its lack of strength to me. While also whenever a blaster bolt hits someone they can sometimes shrug it off. However a slugthrower usually has loads of recoil and has great kinetic force behind it when it hits a target often causing them to fly back. Especially shotguns versions. As well slugthrowers have mercy rounds which are nothing but kinetic energy which if shot at this armor could cause great damage. Also slugthrowers have a extremely high firerate.

Character Bio
Well, the kinetic energy generated by blaster bolts is more about exploding gases. Because the gases have negligible mass to begin with, there would be very little recoil.

Also, unless it's getting hit by a very large caliber round, a body doesn't typically fly backwards as seen in movies. And, when a large round is used, it typically will penetrate rather than transfer most of its kinetic energy into the target. In all likelihood, a target would stumble backwards rather than fly backwards.

Finally, can you be more specific under the "Classification" section for the various armor types. While the armor can have multiple purposes, it's best to be as specific as possible. For example, the classification for the recon armor would likely be "recon" or "scouting".
Asemir's Bio

Hmm yes I see, but when I meant send people or things flying I meant by the Star Wars universe. I'm sure in one of the books I read Han and Leia were using slug throwers on the energy spiders on kessel and it hit with enough force to make them fly back a bit. Which I think they're more durable than a human and weigh significantly more. However the edits have been made.

Character Bio
Ah, yes, then that's a good point. Star Wars isn't known for its scientific (or logical) accuracy, so I can see where you're trying to be consistent with the universe. It might even be my fault; I'm thinking too hard about it.

In any case, I think it looks good, and I will approve it.
Asemir's Bio