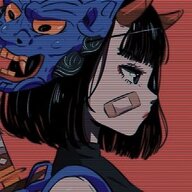 ​
The smell of Sato's own blood permeated around metal walls, stained with ship fuel and clinging to the smoke travelling from Basim's lips. The mercenary's unshaven lip creased upward in a wry smile as he extended a large hand to grip her chin. Seated in a chair beneath the deck of his ship, she remained completely still, hands gripping the seat of the chair as he blew smoke directly into her face.

With a squint of contempt in her eye, Sato lunged her head forward and spat in his face. The mercenary wiped the trail of saliva from his cheek, before turning to face her and striking a filthy hand across the side of her face, bruising her cheek in the process. Her head bent to one side and pain shot through her neck. Biting her lip, Sato pulled her head upward and faced him, the anger seething from her every breath.

"Karker!" She cursed, throwing her head forward and allowing her messy hair to sway with the thrusting motion of her neck. Basim extended a wrist and gripped her chin again, pulling her nose towards his lips.

"You know what's gonna happen if you don't do what I tell you?" The mercenary threatened in the thick, masculine tone she had come to despise. Arching her neck in a gesture of defiance, the young woman's chest heaved up and down as she resisted the urge to claw out his eyes. "Continue to be a waste of my time and I'll sell you to the next Hutt who contracts me, you hear?" The man released her chin and rested his rifle over his shoulder.

"Any one of them slugs would pay a fine price for a pretty thing like you." Inhaling on his cigarra, Basim gave Sato one more dire look, before turning around to leave. "Now get ready, we're moving out." The warrior warned her a final time and exited, leaving Sato to rise to her feet, clenching her fists in the process.

Looking around for her things, Sato shivered in her singlet top and pulled on her black spacer's jacket. She platted her hair to avoid it getting in her face and slung her bo-staff over her back in preparation for the mission at hand. The ship cruised into Imperial space, where a Sith holding facility waited for Basim's raiding party. Among them was Sato, who charged her electro-staff and spun the ends around a few times for a moment of practice.

Sato left her room on the ship and accompanied Basim in the docking bay, where the landing ramp descended onto the duracrete below. Standing in his helmet and armor, the mercenary was now indistinguishable and marched forward down the ramp with Sato behind. Imperial guards stood at either side of the gates, whom Basim took out with a pair of rounds from his rifle.

Character Bio
"They took the bait?"

The Sith Lord sipped her tea from the metal cup, draining the fragrant liquid and then setting down the empty container on the metal tray. She sat on a pillow, legs crossed, eyes closed.

"Yes, my lord" "Their assault has already begun."

Her eyes opened as her bald crown tilted back in a deep exhale. A smile curled over her lips as her hands settled on her knees.

"Good. Have the guards fall back. Offer minimal resistance." "My lord..." "Then circle the reserves out the back and capture the ship." "I will go stall them."

The warden nodded and turned to leave, he stalled for a moment as the Pale Assassin rose to her feet and stretched her arms up over her head. Her back resounded with several successive pops as she twisted this way and that, then let her arms fall down to her sides.

No alarm went off, the guards put up minimal resistance before falling back to preserve their own lives.

Darth Ophidia made her way down into the holding cells, sabres on her hips, dark hood pulled up over her head. A low melody vibrated from between her purple hips as she strolled casually through the holding facility. The guests turned away from her and diverted their eyes, some curled up in their beds from the cold sensation of her presence - like claws tugging on their souls, playing their nightmares like a twisted harp.

[member="Sato Ryuu"]
You must log in or register to reply here.

The Ties That Bind

Private The Ties that Bind

K
The Ties That Bind

Private The Ties That Bind {Flashback}