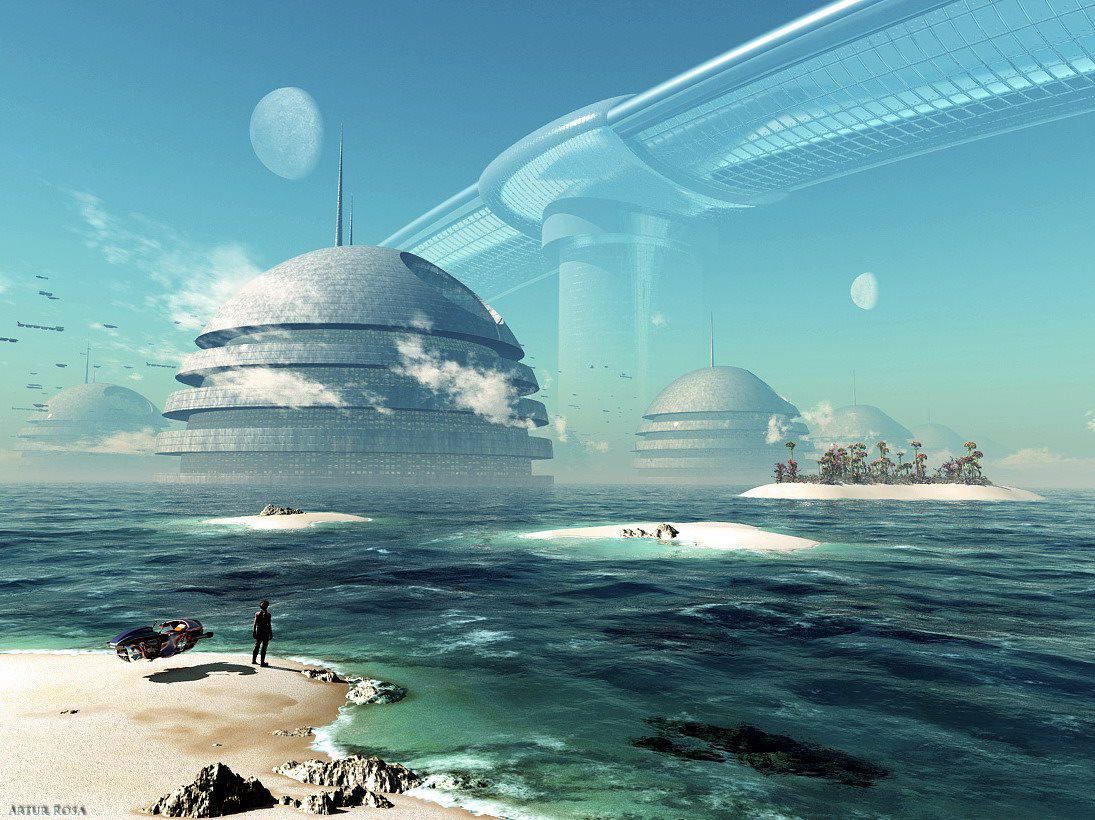 Pantolomin
City of Katana
​
The whine of repulsorcraft would be heard, going across the large oceanic waves near Pantolomin. Each one carrying heavy repeaters and cannons as they circled in patrol around the large city of Katana, awaiting any form of resistance that could soon come from the Grayson Imperium. The largest sections of the streets of Katana would rumble with treaded tanks, machines of old as they would position themselves into alleyways and corners of the buildings, keeping aim at the sky with their turbolaser batteries. Men with blaster rifles would await on top of balconies and sections of the stores, awaiting for the war that would soon begin again. As the mobilization was going on, the slam of a nearby blast door would be heard. The light would be very dim in the room as there was a loud groan from in the middle of the room.

"I am growing annoyed...where is Project V Thirty-Nine?"
"Yeah...I can tell you where. V is for something you have between your legs...meaning as a man, your missing something with two round objects."

There was a loud crack of something breaking before a slam was heard with a loud coughing noise. The scene would emerge with the Sullustan tied with wrists bound onto a metal chair, coughing as blood would run down his forehead and chest as he was hit with a durasteel pipe. Coughing again, he would spit out as he looked up towards the human individual in question known as Thalan Mita, properly known as Warlord Mita that ruled the lower levels of Coruscant. His primary occupation was of training of slaves to be turned into mercenaries, sold as soldiers of fortune but of a thick lie put into them with bombs strapped inside their necks. His greasy yellow hair, stagmated with his awful choice of leather jacket and armor would make him a true slime ball, his left eye would be of sickly yellow, his other eye being of blue. With a maddening yell, he would kick at the Sullustans chest as he spoke out louder.

"WHERE IS....PROJECT, V, THIRTY, NINE!"
"Nhrnn...Add thirty and you will have an idea what you and Warlord Kafla can do for fun."

There was a loud shriek from Warlord Mita as he struck again with the durasteel pipe. Warlord Petha Kafla was a Rodian Warlord, being known as one of the most ruthless gangs of all of Coruscant. He mainly got by with the others by offering their services for land and dealing with the constant troubles of Coruscant. Worst to most, he was known also pitting fights among civilians for amusement, collesium esque fights that would end generally in both of their deaths, if the Warlord himself was displeased. With large green stalks, his frame slightly portly, he deserved his title as Warlord...though calling him Chubby, was a death sentence. With a last strike of his pipe, the Sullustan started to cough out blood as Warlord Mita would throw the pipe aside and exit the room, closing the blast door as it slid shut with a secondary door as he passed by a twin set of Ysalamir would be outside the door, giving a strange croaking like noise.

They were in what was considered at one point, a law enforcement station. When they invaded, they took it as their own headquarters as it was surrounded with duracrete walls, solidified into their own structure. Nothing short of direct turbolaser bombardment would let it pierce the lower levels. Warlord Kafla would watch from the other side, smoking a Cigarra as he gave a wide smirk, having a bit of fun seeing yet again, another failure from the might Warlord Mita.

"You failed still to divulge information from that Sullustan...c'mon, let me take a turn. You know that I...I myself, can get results."
"He will crack, they all do. Once we divulge from him his old secrets, we can pinpoint the location of Project V Thirty-Nine. He cannot withstand it forever...he is not made of Beskar."
"Indeed...that said, Warlord Ma would think she can find it before you do. You know it to be true...she finds it first, we are all kriffed."

Warlord Ma is merely a nickname. Ma as she was called, in her late seventies was a Twi'Lek female with a lot of authority. Considered the fence of Coruscant, her men would collect artifacts of formidable nature for her and with it, collect dues from stores that have not paid her "reasonable" tax rate. Having been one of the oldest and most senior of the Warlords, she commanded a great deal of respect from all that was under her...even the other warlords. Dark Purple in skin color, her skin would start to sag though she kept with her a full suit of battle armor along with a heavy repeater, generally seen also with her own lady Cigarra.

"You are right...but give him a breather. People think a bit more when they are alone.
"Hehe...now you sound like Ma."


Under the Anthan Ocean
Casino Submarine "Kalos"
​
A single blaster bolt would ring out as an entire crowd before them would scream. A single THUD would be heard as the Azantis head would slam face first into the sabaac table with a sickening laugh behind it whom held a DL-22 blaster pistol that was highly customized, engraved and without a scope. With another laugh, the man would slam the blaster pistol down as the crowd would go silent, some would sob in the back. The human wore a glorified gamblers outfit and was known as Warlord Salvin. Gelin Salvin was his full name, he was not even a Warlord by the time of Coruscants attack though the death of his actual leader, Warlord Utan, he would take over the operations of running casinos, gambling pits and beyond all things, the cheating and the scheming of the entire group. Warlord Salvin was known for being a card cheat, but saying it out loud would mean a blaster bolt would be put in your knee caps. Shuffling the cards before the last three, they would look up at him as Warlord Salvin grinned wickedly, his black hair clean and his face shaved, his blue eyes scanning the audience and then the players.

"Place your bets gentlemen...there is only now two of us remaining. I assure you as well, it be a Sithspawns great time~"
"Come on now, stop playing with your food. You have plenty of time for games after we find our little pet project."
"Aww, but I don't wan-"

The loud whine and then blaster repeater fire would be heard from above, shredding the table below them as Warlord Salvin had to leap back from his chair, along with the other players as they scurried into the audience, hiding among the civilians as Salvin lost track of them. Growling, he would look up as he saw Warlord Ma, with that damn old repeater of hers hanging around her waste as she smoked a very long cigarra as a thick green smoke would go in front of her.

There was a long growl from Warlord Salvin but the moment he saw the blaster rifles lower onto him from the balcony from her goons, he had no choice but to comply. Getting up, he would wipe the dust and wood from his body and snapped his right finger as his men got into line behind him, marching with him while also snapping their fingers once. They were a tight knit gang of gamblers, most of them drink together but above all else, it was a creed and moto to work with Warlord Salvin...but the snapping, came from Utan. Walking up the stairs with his men, the goons of Ma would be laid back, smoking or drinking a beer as they looked at the rather serious group. They knew their place and they knew who was in full control, and it was not Warlord Salvin. Getting up towards the bridge, which was being moped up of the blood by some of Salvins goons after having a hostile takeover, Ma would be looking out towards the window as the sensors would ping every so often.

"We are getting close...the coordinates that I have recovered from the old records indicates where Project V Thirty-Nine would be. I need all your slicers prepared for boarding operations."
"As you wish Ma...but tell me, how did you get these?"
"I have my ways darling...I have my ways."

She would turn as she gave a sickening grin, pulling a long drag from her cigarra and then blowing it as she soon gave her own cackle. The truth of the matter was, she had retrieved them from an old datapad that came through her office eight years ago. At the time, she considered it a near impossibility, a no use scenario...but after the so called "Grayson Imperium" took over all the operations over Coruscant, she took that information and was going to put it to good use. Starting with taking what will be the start of the Warlords offensive. It was a gamble...but if it paid off, Project V-39 would be the killing blow required to end this Grayson Imperium, once and for all.

Character Bio
Location: City of Katana
Apparel​
Amaris couldn't catch a break. At the rate of horrible events continued to exponentially increase in her life, she wasn't going to even live long enough to get a ship of her own. Whether it was making terrible decisions and getting thrown the ground of a planet with bloodthirsty subterranean monsters or a war-zone or...

All she was trying to do was gamble, perhaps with the slightest of cheats, away in the big ole' city of Katana. There was the submarines, but Amaris couldn't bring herself to ever be under water, and in an enclosed space. And right now? She was pretty happy about her choice, even if part of it was still underwater. Naturally, that meant she found herself crouching in her heels, one head peering out from the shattered glass door of a shop.

The city had been on lock-down for days for... Amaris wasn't sure. She bought a ticket to a different system, but apparently the captain of the vessel was a friend of the pirates. The minute they walked off, the people began to try to round them up. Amaris and a few others were able to escaped by a member of the... Underground? She guessed it could be called.

If she knew where the source was, she could try to break it - but figuring out where it was the hard part.

A red light flashed past her face as she scrambled backwards and if not for her fast reflexes, she likely would've toppled over. "Ugh," she muttered. Her fur had been consistently puffed out, and her tail never stopped it's quick dashing. Blue eyes peered back over as her ears held back, almost angry but also terrified. If she needed to, she could change... But she needed to wait for the right time. "You know what would happen to people like this back on Lutrillia? They get tossed to get eaten by the monsters. And I even tossed myself once. Not fun. And it was on accident but... You know, maybe you guys should have immediately fed them to the sharks or whatever things," she whispered harshly to the human that had previously been peering out of the broken door with her.

"Bruh, calm down. Not every place has carnivours waiting to eat you," he muttered with a roll of his eyes. Amaris resisted smacking the heck out of him. Maybe she'd give him to Warlords, too.

Jegy Sesara
Voice​
You must log in or register to reply here.

The Debacle on Teta (Grayson Imperium)
2 3