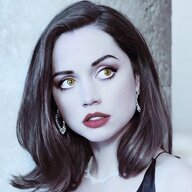 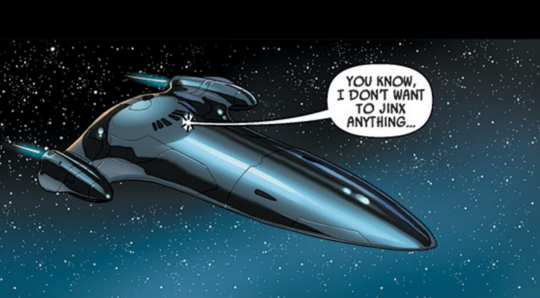 Strengths:
Its like Steve is in front of me!: The heavy modifications to the shields have rendered the ship extremely defensible, able to counter any one of a number of scenarios that might damage it, though these are all extremely specific circumstances in some cases, such as water and severe solar damage. Its standard shields however, have been heavily upgraded, allowing it to survive multiple laser cannon attacks from most heavy starfighters and even survive a glancing blow from much heavier vessels.

Just TRY and follow: In the right circumstances, this ship would allow Maple to flee almost anything, even flee into the upper corona of a star if it had too. In addition, it now has the small chance of even escaping an interdiction field, though the risk to the ship would be great.

Fortress Maple: This is Maple's final refuge if everything else should go wrong, and it has been given a suppression system as well as upgraded life support to reflect that.

Still got it: Maple worked long and hard to make sure once the systems were installed that the ship would not lose any of the prior speed or manuverability it had. It still pilots and handles just as well as before the upgrades.

Sneaky: The stealth systems enable it to hide for a short time period...about fifteen minutes worth before they need an hour to recharge, though given the materials, a force user could still detect the ship.

I see you: Its upgraded active and passive sensors allow only the sneakiest of threats to evade notice.

Peace Walker: It has no weapons, true to its origin. Maple would never let her bird become a killer anyway.

Niche specialties: The Ship's more specialized shielding is for atypical situations or defeating specific threats when all else fails. Since Maple does not really intend to put her beloved ship in danger unless she has little other choice, these upgrades, such as the Sundiver field projector or the AGR would only be really useful as a last ditch tactic, and never a first recourse when fleeing is the better alternative.

Engine stress: Maple could not bare to let go of the engines, which she has lovingly cared for for years. They are old, and while expertly maintained by Maple, they should not be kept under stress too long, as there is a risk of temporary engine burnout for three minutes, which would cut power to the whole ship, leaving it adrift.

Selective: The modifications done to fit so many new upgrades safely to an old vessel, mean either only the main upgraded shield system or one of the niche systems like the Hydro Shielding can be on, not both.

Sentiment: Because there were large parts of the vessel Maple simply could not part with, the vessel, while better able to handle the unexpected armed pursuit, is still ultimately a flawed fortress, not meant to stand up to heavy military engagement at all and the ship itself is over a century old. The new upgrades require near constant monitoring and maintainance in order to keep it interacting smoothly with the rest of the ship. A more modern vessel could do the jobs of these systems all at once. It is meant for running, hiding, and feeling safe, not war.

Power drain: The more specialized Solar, Hydro, and Concussive shielding drains power from the engines quickly, and can only be active a short time...about fifteen minutes each.

Description: Maple's original Jedi Courier from her days in The Marksmen. Once the ship of famous fencer, philanthropist, and adventerer Lur Redtide, Maple's childhood hero. Maple won the ship from him in his final official duel before retirement due to an undisclosed terminal illness, fighting her while he was still in prime condition. The Silent Erika was named after his pet bird who never sang but whose death caused him to retire from adventuring. This ship protected the Ex-Shadow for years, harboring her when there was simply no other refuge. Maple would lose her limbs before willingly giving up The Silent Erika. It is her one, truly valuable possession. But in order to keep it protected, she has been forced to concede many of its systems needed upgrades if the ship, old even when Lur Redtide owned it, is to continue being her one true refuge. Thus, splurging on her funds and connections, she lavishly upgraded The Silent Erika from simple diplomatic yacht turned Jedi Courier, to a heavily shielded and modified stealth vessel. In keeping with Lur Redtide's wishes, she has left the vessel unarmed.

Please put a singular rating for defense here. We don't separate ratings for different portions of the ship.

Change made. Sorry I kept you waiting!

Just throw in a number that seems proportionately right. Like, uh, 15 meters. You'll need to add a width field, too, and do the same thing (you can probably say 20 meters for that, given the image).