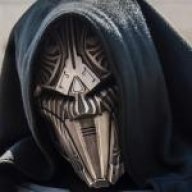 Much of the vessel was shrouded in darkness, hidden from the sensors of the nearby galactic powers. Shields were active to repel asteroids that got close to the ship, but beyond that, it was a near dead ship floating through space.

Time was ticking down the Sith Lord felt. From the beginning he had strode for the destruction of the Alliance, and with that looming in the distance, there was also the existence of his child that was also on the horizon. A confusion lingered there, but that was pushed to the side as soon as the thought had crossed Graush's mind.

The Order will take the place of the Alliance, and then the same will occur to their remaining allies.

But even so, the Imperials that Graush led were too soft. Weak. Many had become veterans of battle, but they weren't hard. They were soldiers, not warriors.

And Graush once more stepped back into shadow as his Voice filled the spot he had been in previously.

"I am ready to serve at my Lord's discretion."

And across the galaxy, Graush's Voice's projection appeared.

[member="Gorba the Hutt"]
You must log in or register to reply here.

Directive 12, the horrors of war

Private The Deeper The Roots (Seth And Jair)