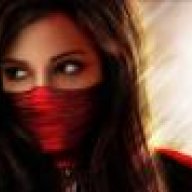 [SIZE=10pt]“Where is that dagum hydrospanner?” Reaching up on tippy-toes, the young and squeaky-new Fringer rummaged around in one of the training rooms, fingertips reaching toward the back corner of the top shelf. If she had known she was in one of the force-sensitive areas, she would’ve high-tailed it out of there. But she didn’t.[/SIZE]

[SIZE=10pt]She was working on some modifications with Sargon’s ship, the big ol’ boss. She figured she owed him after that Circe bounty nonsense. Stars, she could still feel his disapproving gaze. Apparently he hadn’t heard about job-shadow day.[/SIZE]

[SIZE=10pt]She rummaged around some more, making a heck lot of noise and knocking a few of the training sabers over.[/SIZE]

Character Bio
Jared was trying to meditate a bit when he suddenly heard a loud noise. He opened one of his eyes, but could not detect the annoying source of the sound, so he closed it again and resumed his important meditation session. Yes, very important, because the stress of his high position made him easily agitated and he did not want to get a heart attack while only being in his mid-twenties.

Reaching out with the Force, he felt one with his surroundings and attained some small portion of peace. Jared smiled lightly and started to disassemble his light saber with only his mind. A tough feet to accomplish, but the Lord Admiral was one with the Force; he would be able t--- BAM

Jared's light saber fell on the ground, half disassembled with his concentration broken. Jumping up, the Knight roared at the top of his lungs while enhancing the volume with the Force: "WILL YOU FFREKKING LEARN HOW TO KEEP YOUR SILENCE?!"

She cringed, grabbing the hydrospanner and peeking her head into the adjoining training room. "Sorry," terse whisper left covered-lips. "...uh...cloaked being, thing." Tucking the hydrospanner into her tool belt, she went to leave but hesitated, catching herself at the doorway.

She couldn't help it.

Myrtle ellipses scanned the room and saw the broken saber, putting his grumpy-command together. "Shouldn't noise not matter when you meditate? I mean, if you're really meditating, right?"

Character Bio
Jared was already regretting his outburst, what would Spencer have thought if she had witnessed that? He was about to get up and apologize when the girl came back and asked him about his concentration, or lack of. Suddenly the urge to laugh was overwhelming and so he burst out in laughter. After composing himself, he said with a faint smile: “Excuse me, my Lady, for my outburst.” While saying that he jumped up and then continued “Sadly my level of focus is crap, I need to work on that. “

Then he waited for her reply, while trying to get a read on her. She was obviously force sensitive, the Force was emanating from her quite clearly. Jared wondered for a while, might she be a possible apprentice for him? Maybe it was the Force that brought her here.

Wow. She was expecting another outburst, not civility and politeness. The tension in her shoulders began to dwindle even as myrtle-ellipses remained alert. Wiping her grease-covered hands on her navy-blue pants, she stepped forward and extended her somewhat clean fingers. If his presence intimidated her, it didn't show.

"Name's Kitt Solo. And no worries, darling," voice flowed from her mouth like melted caramel with the distinct regional accent of Southern Corellia. "I was just...passing through and looking for a tool to help me with my next project."

Character Bio
Jared slowly arched his eyebrow at her response, she was interesting indeed. Taking her hand, he kissed the palm of it and then said with a smile: “Well met, Lady Solo. My name is Jared Ovmar.” He wondered for a second if she realized who he was. The fact that he was the Lord of the Fringe was somewhat publicly known, but he would not be surprised if some people were not aware of the face behind the title. It was something Jared was glad with, he did not like all the attention one gets when being in the spotlight. In stark contrast to some other people, he preferred to stay in the shadows controlling the events from there.

It was still interesting to note that she was Force Sensitive, a strong one at that. But instead of asking about that, for now he kept his silence. Instead he asked her about her.. project. “And for what would you need that hydrospanner?”

She hadn't had her hand kissed in...well...never. Especially one half covered in a ship's grease and oil. This Ovmar guy must not care. She laughed nervously, maintaining her best, charming smile-half-smirk. She was sure he was somebody important, she just didn't know enough about the Fringe structure to really know who the top-dogs were. She imagined any of these forcers were dangerous enough.

Quickly, she pulled her hand away, flipping the hydrospanner into a notch on her belt. "I'm modifying an old jetpack I found. Tinkering is kind of a hobby for me. Anywhooo, I'll let you get back to your cursing and---I mean meditating and er-stuff. You won't have to worry about me interrupting you for atleast the next...fifteen to twenty minutes." Winking, she began to turn away.

Character Bio
A slight frown appeared on his face, she was going to leave just like that? Some part of him was amazed, he thought she would stay just a little while longer, to annoy him of course. It was not like he thought her pretty or whatever. Because that would be vastly inappropriate. Regardless Jared coughed softly and then said: "Are you aware that you are a Force User?" He was not really sure how to judge her knowledge, might be she knew already. Might be she had never even thought about it, but it was his duty as the Lord of the Fringe to train her if needed.

He stood patiently and awaited her response, from her answer he would then work on a suitable arrangement.

She froze-up, about to step over the threshold of the door. And Kitt Solo was not one to freeze-up! Turning slowly, she felt a growing sense of dread clawing its way from her gut mixed with a very-real sense of hungry excitement. “Yes.”

“And I hate it. I can’t control anything and when this crazy invisible-mojo hits me, it’s like a drug.” Fingers tightened around the hydrospanner and her belt. “I’ve never wanted to learn more about something while at the same time wanted to run as fast as I can away from it. You dig?” Cheeks flushed from the raw, urgency in her tone and the embarrassment that she was being so open with someone, let alone an unknown force user.

Character Bio
A chuckle escaped his mouth as he felt the hunger streaming out of her, she really did want to learn.. well he could work with that. At least if she had any discipline, otherwise Jared would have to learn some patience and he was not in the market for a master in that regard. "I see." Then he turned around and walked back to the center of the room. With a graceful movement he sat down again and closed his eyes, pretending to meditate again. If she wanted to be taught that badly, she would have to convince him to do just that.