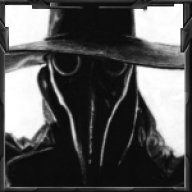 STRENGTHS AND WEAKNESSES (Required: 2 Weaknesses Minimum) :
+Has 2 Wrist blasters hidden under his cloak and his MSD-32 distruptor pistol in a pocket.
+ Intelligent.
+/- Mysterious.
- Seemingly scary to people.
- Unhealthily underweight.

BIOGRAPHY:
The Plague Doctor is a mysterious character spotted on Tatooine not too long ago. His history is short, or what he gave to the man that supplied me with this information. He was born on Utapau. He had a troubling childhood. His Teenage life was also bad. Though, One day, He decided to travel around the galaxy. Which, He ended up becoming slightly crazy in that time period. He said he's better now, And trying to start a new life.

He joined the Lords of the Fringe. He thought it was a good choice. He created the 118th Science and Technology branch, And started his research.