What is the The Moross Crusade?
The Moross Crusade is a faction that centrally lies around a religion and religious worship. The Faction itself is follows the leadership of Amorella Mae, Cameron Centurion, and Soliael Devin Talith under the guise of three distinct gods within the Moross Religion. Force users within Moross are neither Sith, Jedi, or Dark Jedi(Though they can identify themselves as whatever they want.) they are simply seen as Prophets, Crusaders, and Disciples each with a place in the Crusade. Our force users are ordered into a distinct military structure wholly different from other current factions. The Moross Crusade is simply a coalition of planets held together by the religion of Moross.

What is Moross?
Moross is a religion created by Menotius and Soliael in order to subjugate several planets beneath their heel. The religion of Moross is centralized around the goal of getting into what is known as the “Great Hall”. The Great Hall is essentially heaven. If one serves the Pantheon of Moross faithfully at the end of ones life one of the Ten Divines will guide the follower into the Great Hall where they will find peace, and whatever else they could ever hope for. In Moross there is Ten gods each one with a distinct identity, purpose, and even emotional skillset. Moross is neither inherently good or evil. Even though it is currently run and created by Sith some of the gods within the Pantheon can be considered “good”. This means that through the oceans of change that occur within the galaxy the religion of Moross and its followers can theoretically become an ocean of good instead of conquest.

Moross itself is run by a triumvirate of three people. These three men or women are well aware of the falsity of Moross and are ever changing. When one reaches a certain level of knowledge within the religion of Moross it becomes clear that the whole thing is a lie. The Three “gods” that run the entire faction are just very powerful force users. When this is realized it is possible for one of the high Prophets to “challenge” one of the gods in private. If the God is to die in this challenge then the Challenger takes the identity of another one of the Ten gods.

This same thing occurs if one of the Gods was to die in battle with the enemy. Another high Prophet is chosen and he essentially becomes another god. This is never questioned of course because God's cannot truly die so instead of dying they are just returning to the immortal plane then returning when they come back. This means the nature of the gods is cyclical, you could have one showing up every other time.

To read a more detailed account of Moross and how the religion came to be click here.

We welcome everyone to join and have fun.

For More information on the Rank Structure click Here.

What is the Moross Crusade like?
The Moross Crusade is neither good nor evil. Depending on which “Gods” are currently in charge many things can change. If the three gods in charge are mostly Warlike then it is far more likely for the planets beneath the Moross crusade to be more militaristic and war like. If however the three gods are some of the more peaceful then the absolute opposite could be said. Generally however the Pantheon consists of a mix of the two. Within the borders of the Moross crusade life is good, the people are not abused or subject to slavery, nor are they forced to labor away in places they don't want to be. Everyone has general freedoms and rights. This is mostly to keep the people complacent underneath the rule of Moross Triumvirate. After all they could not risk rebellion.

It is entirely different however when Moross invades a world. When the followers of Moross attempt to spread their religion it is often at first with kindness. Prophets, Crusaders, and even Disciples are first sent to a world of unbelievers, they then perform “Miracles”. They heal the sick, feed the starving, work with the poor to make things better. They bring the religion of Moross to the unbelieving world, and then give them time. If however the unbelievers do not accept the religion of Moross...then the Crusade comes. The followers of Moross make quick precise work of the unbelievers, decimating everything in their path and obliterating entire worlds until they finally submit.


Relationship with other factions:
While harsh and unwilling to stop their expanse to unconquered worlds the leaders of Moross are not fools. They know they cannot go to war with every faction in existence and because of this they are more than willing to deal with other factions. They spread their religion as far as they can, and when it comes to diplomacy they offer what they can while also offering education within the religion of Moross. This kind face however should not be accepted without question. This is because as soon as the Followers of Moross see an opening, they will strike.

What do we have to offer you?
The Moross Crusade offers a unique roleplay environment unmatched by any faction. The religious aspect of our faction offers a completely new and unique environment for characters to interact in. We offer a new type of roleplay as well as conforming to old standards so that there is quite honestly something for everyone who wishes to join the faction. We seek to help players along with their own character development while also furthering the faction as a whole.

Along with this unique Roleplay Environment we also offer unique rewards for members who stay with us for longer and stay active within the faction. 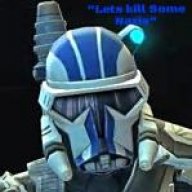 Character Bio
Aren't you already a member of the Republic [member="Commander Sharky"] ?