Nothura exited his ship, he was here on a contract for bountie by the Empire, dead or alive, bringing the bountie in dead meant more credits, that is what he planned to do, he made sure his two blaster pistols were secure then made off down the street, he had seen pictures of this bountie on the holonet, a mass-murderer causing trouble for all the factions, at the moment that person was in hiding on this planet, or at least... Nothura hoped he was, this would be his first bounty the beginning of his career, if only his father could see him now. He looked at anything that could be used as a hideout, yet he was finding nothing. 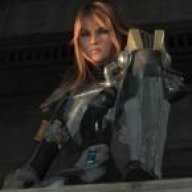 Farther away from where @[member="Nothura"] had landed, a Halo Gunship landed, another bounty hunter exiting from it. It was a woman with a more unique Mandalorian armor set, even down to the helmet that covered her head. Scanning the area she looked for any signs of the bounty she was after, the Mandalorians having put the word out for wanting this guy dead or alive. For them bringing him in dead meant more credits, but since it was only an option Aela didn't need to stress too much should he be killed. Not seeing anything yet she began walking onward, trying to find any sign of where this scum would hideout. Eventually she came to a small hovel, like a cave, with a number of discarded pieces of equipment and rations. Bingo. Taking one of her blasters out she crept inside.

Nothura walked for a bit longer and began to recognize some of the places. He remembered that this is where his father hunted a bounty so long that he set up a temporary HQ with rations and equipment, he would know, he had stayed in it for quite a while with his father. He walked past another few buildings, carefully checking them. Then he came across a small hovel, he recognized it for his father's cave, looking down he saw footprints, he kneeled down to look at them, they were fresh, very fresh, the print was made by Mando armor, the Empire hadn't told him it was a Mando they were after, Nothura tried to stay on good terms with all the factions, but a hunt is a hunt and he wouldn't give up. He withdrawed both his blaster pistols from there holsters, holding one in each hand he proceeded to enter the cave, taking caution.

Eventually reaching the main room Aela found nothing. Whoever had been hear was either out or hadn't been back for a while. Regardless it was a dead end, or a possible opportunity. She turned to leave before hearing someone coming in. Not sure if it was the bounty or someone else Aela had to hide. She stood to the left of the entrance, her blaster still in hand, and waited until whoever it was came inside.

Nothura burst into the room, whoever was here is hiding, it was impossible for someone to leave so fast. This room looked vaguely familiar, there were two beds were his father and him had slept and a pile of books were he had left them, all based on Starfighters, but now was not the time for memories, he continued his search looking behind every corner, every possible place, still holding his blasters, he turned back to the doorway and saw a person trying to conceal herself, Nothura pointed the blasters at her in a way that said piss me off and I'll shoot. He walked calmly towards her and said in a sarcastic yet seductive voice "what the hell are you doing here?"

She had her blaster pointed at him by the time he had his at her. "Looking for a new house." she joked as she began circling him. She managed to pull a second blaster out, now both of them on the same terms, before she said "If you're not the guy with the bounty on his head then beat it. I was here first." She was sounding like a coy competitive type as she threatened him.

"I asked why are you here?" Nothura threatened "and I was searching for the guy with the bounty on his head" why should he have to leave? This chick looked bad ass enough to have collected hundreds of bounties then lowering his blasters back into there holsters he asked "Are you a hunter?" If she was he couldn't harm her, it was against the creed that all Bounty Hunters lived by to harm another hunter and Nothura didn't really feel the need to break tradition anytime soon.

"No. I'm a dancer, I just wear this thing because it's comfy." she joked but in a more serious tone. She still kept her blasters on him before saying "I'm giving you this one chance: get off this planet and leave the bounty to me, or I shoot you in the knee and leave you for the predators to finish." Since she was close to the doorway out she walked back, eventually getting outside.

The women backed out of the door, and while she was outside Nothura dug through his fathers cabinets, finding a map that showed the entire city he concealed it in his holster, then grabbed some rations so he wouldn't look suspicious. He walked outside took one look at her, muttered something about the bountie hunters creed and walked in the opposite direction. When she was out of sight he took the map out and started reading it, there were 5 possible places for an actual hideout, one of them had been that cave. One down four to go, he put the map back in the holster and walked to the second place, a house, he entered, nobody was there hewas disappointed, he sat down on a chair, hoping he could find the bounty before the chick did.

With the other guy out of the way Aela needed to find the bounty and fast. Looking around she found a decent spot, high on one of the older buildings, which she could use for a perch to overlook the entire area. Using her jet pack she flew up and took position, looking around for the bounty. As she waited she took out a rifle and used it's scope on the faces that passed by to take a closer look. Eventually she found someone wearing a hood trying to make his way past the small crowd of people. "Bingo." she said to herself as she focused on him.

Nothura left the house and went to what looked like a old abandoned house and looked around, finding the woman from the cave with her rifle out, he followed her aim to a shadowy figure in a black hood, Nothura withdrawed a pistol from it's holster an aimed at the guy, he aimed quickly and pulled the trigger, to quick, the blaster bolt missed him, as soon as it went past the man he turned and fired at Nothura's foot, he feel to the ground writhing in pain he caught the woman's eye and mouthed "shoot him" this man deserved to die and if he couldn't do it then he would let her take the shot.

Aela stopped for a moment when she saw all the confusion. When @[member="Nothura"] shot she looked back at the target, only to see he missed and fired back at him. Taking the chance she fired, hitting him right through the chest. The bounty fell and Aela stood, nodding at her kill. Then she looked over at Nothura and sighed before flying down towards him. She landed and said "Get up!" She picked him up by the collar and slammed him against a wall. "You nearly cost me a bounty, you nerff!"

Nothura let the woman pick him up and slam him against the wall, "that bounty is costing me my life" he said as more blood came from his leg, some of it even going on the woman's armor, he felt sick, he removed his helmet from his head and vomited to the side, He looked at the woman "yeah, I am such a Nerf" he said with a slight chuckle "so much of a Nerf that I refuse to die here" he said as he injected something from a medpac into his neck.

When he vomited she let him go, making a disgusted sound when he did. Watching him inject something in his neck she shook her head. "Some hunter you're turning out to be." Looking around she said "Sure there's a hospital or something. Bet you'll be able to hop along to it in no time. Not unless that thing you put in you is supposed to fix that shot in your leg." It was clear she much care for this man, no matter what condition he was in. He tried to steal a bounty from her, that made him on the wrong side of her good side.

Nothura got up, "No that injection just needed to be used" he said as he inspected the man, he turned it over to reveal the face of a Kominoan female he knew very well, she was the one who cared for him while his father was away hunting, he was the person he considered his mother. His father had said something about her crimes when he was a kid, his father loved this Kominoan. He walked to the other woman and said "you still got the bounty, enjoy your credits" he said as he turned away and began to stroll back to his ship.

Looking at how his expression changed, after seeing the target, and said "You knew her?" When he told her to enjoy the credits and walked off that was answer enough for her. It wasn't her fault this female had caused enough trouble to put a price on her head. A job was a job to her. "Maybe I will." she called back to @[member="Nothura"] as he walked off. With that off her chest, still not caring about what had to be done, she turned to return to her ship.

Nothura walked to his ship, he had failed, but that was good he could learn from his mistakes. He entered his ship and hovered a hand over the controls, setting his hyperspace coordinates before rising up into the planets atmosphere, he jumped into hyperspace as he thought about how many people had die that he knew, but he stopped thinking about death. The next time he and that woman met he would be stronger and better.

@Aela Kellov
You must log in or register to reply here.