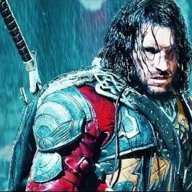 
DESCRIPTION
Nearly half a century ago Nemesis was in a battle that had shredded his body and destroyed his lightsaber, the energy creating a catalyst that overloaded the power cell within the hilt. As his body healed a limp became noticeable which caused Nemesis to acquire a cane. But as his body finished healing he kept the cane and the limp to aid in the persona he had crafted over decades.

And so he began crafting his new tool. Taking the idea of the power cane, which utilized a cane and a hidden sword. But taking the weapon he infused it with the Darkside, using his alchemy to alter the durasteel and transcending it to a proper item to be used and owned by a Sith Lord.

In the pommel of the cane/sword he fastened and infused a kyber crystal, a blue crystal. Initially Nemesis thought to corrupt the crystal, but instead chose not to dominate the aura. Instead he worked in symmetry with the crystal. An understanding became that he would only seek it's assistance when he wasn't actively acting in will to the darkness inherent of evil but rather, the darkness within his soul.

Tis a cane: it's a cane, but with a hidden sword.
Super Charge: the force crystal can augment the natural ability of the weilder.
It's a sword, hello: more then just a sword, a product of alchemy the power cane it's infused and transmuted from a simple blade into a Darkside vergence capable of absorbing energy from force attacks to be distributed later.

Back scratcher: it's not quite the same size of a full sized sword or lightsaber, so the reach is shorter and a glaring weakness in combat.
Hi, I'm a Darkside user: Darkside presence means that unless you actively hide it, force users can detect it, and you.
Vergence: as a force weapon, it can be affected by voids, ysalmiri, or other force negating fields. As such any force attributes are negated dropping the weapon's usefulness to a pig sticker that is still alchemized.

This just seems to be a Sith Sword..but a cane. Cool with me.

Approved Tech The Cane of Hrafnar
2

Approved Tech The Cane Without Fear