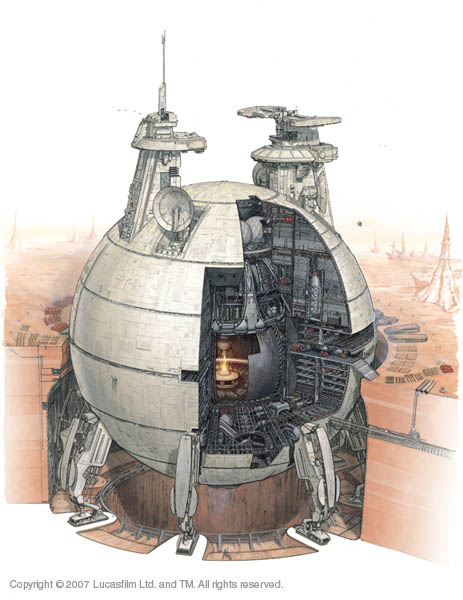 Intent: A mobile base of operations for the Rebel Alliance, and a setting for threads.
Development Thread:
http://starwarsrp.net/topic/13740-jokers-take-all-battle-royale/ - Battle thread, competing for the Lucrehulk. 123 posts.
http://starwarsrp.net/topic/14030-salvage-and-friendship-jorus/ - Beginning the refit, and recruiting for the Rebel Alliance. 23 posts.
Manufacturer: HKD/Baktoid, modified by Silk Holdings
Model: Lucrehulk-class Core Ship, heavily modified
Affiliation: Rebel Alliance
Modularity: As the ship has been heavily modified already, further modifications may be extremely successful or cause unforeseen complications.
Production: Unique
Material: Standard starship materials. Hull primarily durasteel.
Description:
The Absolution is a home base and combat carrier for the Rebel Alliance. Though combat-capable, the vessel's primary goal is to serve as a safe port. As a result, fully half of its passenger and cargo capacity has been repurposed for expensive technology, paid for by Silk Holdings' shipyard division as research and development. The vessel is capable of landing on a planetary surface. Its internal port capacity is sufficient to hold a large amount of personal ships, instead of gunships, dropships, and military walker barges. The mass driver flak guns are, of course, capable of being loaded with solid shot or debris in extremis.

After the Rebel Alliance dissolved, the Absolution and many Rebels joined the Levantine Sanctum.

First of all, crew. I'm not sure what you're looking at, but I don't think 60 men can crew what is essentially a 900x600x600 meter vessel. Looking at the canon Lucrehulk Core ship, notably without a few interesting systems you've added in, was noted to be 60 guys who played overseer to a frick-ton of droids. I'd like to see this minumum crew expanded a bit, to reflect this, whether a mention of droid crew members or organic crew members. Similarly, the optimum crew in my opinion also needs a bit of a bump, as the canon lucrehulk was noted to have 3000 crew droids but also a ton of maintenance droids. I don't think you need to equal their numbers, as I'm guessing A)Organic crewers can handle more duties and B)Droids have improved a good bit since then in duties, but all the same I'd like that to be increased a bit.

Secondly, your hanger loadout. Fighter count is good, transport is a little different than what's normally allowed, but the numbers match up as you just traded gunships/walkers for a more dedicated transport system. The corvette however, it a bit odd, but spacewise still feels alright with me. I'm going to allow it, but I'm new, and if issues come up it might be edited. Overall, I think it looks good, but I figured it best to warn you here.

Thirdly, the HIMS. A rather good piece of tech, under-utilized by the board in my opinion, but canon has it as a rarer piece of tech, with most if not all canon references coming to Bakura. Even though we're a good bit away from when it was originally made and there's good logic in assuming it would have spread around a bit, I'd still think that it's a rarer piece of tech and decently expensive, especially considering the size of the vessel. What is your logic for the Absolution having this likely expensive piece of tech, along with all of the other nice goodies it has in it's vault?

@Me when you're ready.

2 ) I included a cutaway view of the canon ship with some scale indicators. My guess is that a carrier-modded spherical ship this size should be able to fit something 200m long if necessary, or even larger.

3 ) The HIMS is very expensive and rare, yeah. Jorus and Alna are pretty dang wealthy, and (through Consolidated Bacta Ltd.) they do substantial business on Bakura, which is a local distribution centre for Consolidated. Many of their Rebel operations take place within the Omega/Fringe neutral zone, not far from Bakura. Jorus is capable of acting as a HIMS, and is willing to shell out to ensure that the ship can escape anything even when he's not around.

Character Bio
Crew edits seem reasonable, I agree with the logic on the corvette, and the logic for obtaining an HIMS is sound.