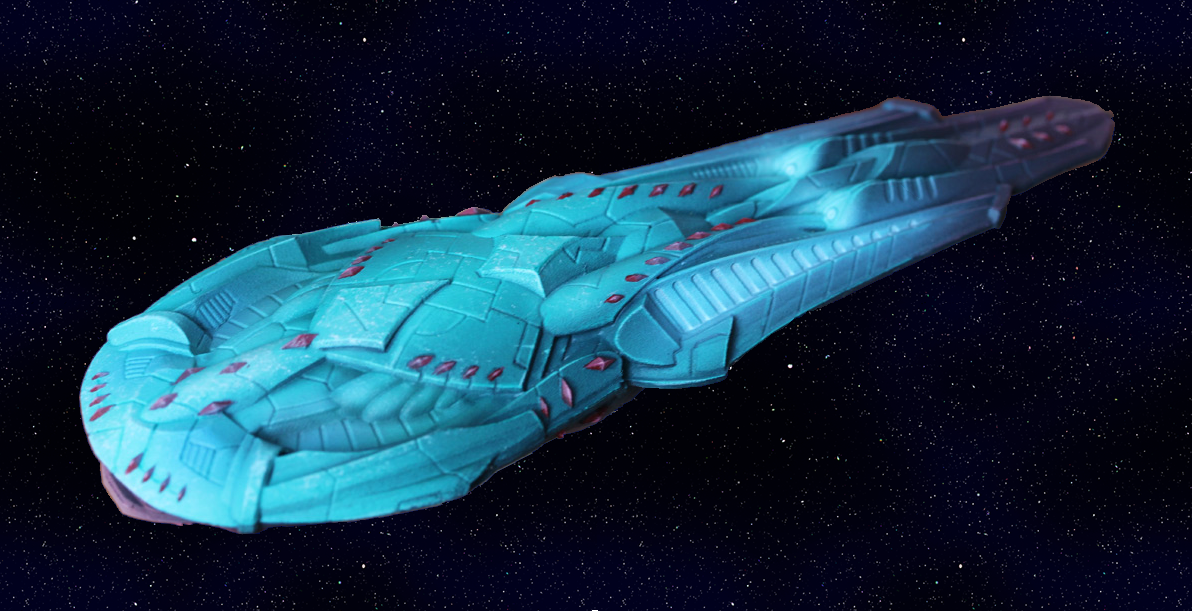 Description: The Tempest-class Star Destroyer is a fast star destroyer designed to rapidly transverse a battlefield to occupy key positions or exploit breaks in enemy formations. To that end, the Tempest is equipped with powerful banks of Nimble-5 Ion Engines and augmented by a Gulfstream Maneuvering System, which lends the organic-looking craft unusually exceptional speed and grace in its movements. As a combatant, the Tempest has few heavy weapons emplacements, instead relying on a large number of smaller weapons to give it large volume of fire with which it can easily engage multiple targets at once or wear down other opponents by sheer saturation of fire. Because Tempests have unusually low-powered shields, most Tempest captains do not tend to like slugging matches, relying on obtaining a superior position to minimize enemy fire, rapid movement in order to avoid it, or using active defenses to keep their ships relatively unscathed in a fight.


Technical Descriptions​
Crew & Automation: The Tempest Star Destroyer actually falls back from Lucerne Labs trend of high automation. While the ship retains a network of Calor Bio-computers and Biolux Organoform Circuitry that can allow the ship to automate some basic day to day functions and as emergency back-ups for critical systems, most stations rely on traditional manpower to operate. It is not uncommon though for many Tempests to have large number of droid crewmen.

Communications: The Tempest uses a pair Oracle-class Communications Packages supplemented by several dozen comm lasers and a pair of Biocomms. This provides the ship with a fairly typical communication's suite for a ship its size. It generally has enough bandwidth ability that it can act as the flagship for smaller combined arms task forces, much like the Imperial Star Destroyers before it. On a more technical level, the included Oracle Package and Biocomms make it fairly effective on battlefields which increasingly shown a renaissance of electronic warfare.

Hull: The Tempest's hull is an evolution of the MC90 linage from Hast, which shows in its fluid, aquatic lines. In terms of physical construction, however, it shares more in common with some of Lucerne Labs more recent designs. Materially, this frame is constructed of ferrocarbon mol-welded with duravlex to make an exceptionally durable frame to physical impact and high temperatures. This primary frame is then covered in secondary armor belt of link-steel laminated with plasteel to provide some flex in absorbing and dispersing physical impacts. This secondary belt also acts as a rudimentary farraday cage to help protect the vessel from electromagnetic radiation, whether naturally occurring or as part of an enemy attack. This armor belt is then in covered in a primary belt of Argentum Matrix Armor, which is designed to better mitigate the effects of heavier weapons that can pierce through the ship's low-powered shields. Some vital sections of the ship, such the bridge and engineering sections, are shielded with Agrinicrete to provide protection against unusually strong radiation that may get past the ship's shields and hull.

Hyperdrive: The Tempest is equipped with a x1.5 hyperdrive, giving it relatively average performance for its size. With the prevalence of interdictor technology, this hyperdrive has been hooked up to multiple hyperspace coils to form a HIMS device, allowing it to better penetrate extensive interdiction efforts.

Security: The Tempest incorporates conventional Lucerne Labs internal security systems, making extensive use of code cylinders and droid-specific passcodes to control sensitive access to the ship and its systems. Tripping or attempting to force one's way into the system can not only trigger silent alarms that inform the ship's security complement, but also trigger any number of automated traps. Forced access to most restricted rooms triggers man traps concealed underneath the deck's plate in an attempt to immobilize the intruder. Key rooms, corridors, and junction points are further guarded by Class VI automated laser projectors and force-field generators. In terms of electronic protection, the ship utilizes typical pyrowalls and Rapid Repetition Defense Measure programming supervised by a dedicated team of a dozen EI-9 network security droids spread throughout the ship.

Shields: The Tempest is equipped with a relatively lower powered Aspis Shield System which provides the ship with shielding typically common for larger frigates. Because this shielding is so weak, it's common for Tempest Captains to concentrate shielding in specific arcs, allowing it obtain shield parity in that arc at the cost of losing shielding protection in other arcs.

Sublight Drives: The Tempest sports extensive banks of Nimble-5 Ion Engines, making it exceptionally fast for its size. This can allow the Tempest to catch up to some smaller vessels, especially the less sophisticated craft typically used by pirates and other criminals. Against many of its more modern peers, this allows the Tempest to rapidly transverse the battlefield to obtain ideal fighting positions. With it typically only has average agility at sublight speeds, it can activate its Gulfstream Maneuvering System to increase its maneuverability at the cost of speed, making it relatively agile for its size. This is typically done when a Tempest is engaging an opponent in close quarters. With this system activated, the Tempest is very maneuverable at close ranges, especially in conjunction with using its Aura Tractor/Pressor Beam.

Armament: The Tempest is designed as a general purpose star destroyer with a particular emphasis on producing a large volume of short-range fire through turbolasers and mass driver cannons. To that end, it only carries a handful of exceptionally powerful weapons such as Scythe Homing Lasers and Trident Autocannons, which are typically used to augment that volume of fire to better penetrate through select areas of defenses. These batteries are further supplemented by Maelstrom Plasma Energy Torpedoes, which provide the star destroyer with a variety of effects and most of the ship's effective long-range firepower. Further munitions can be launched by the ship's minelayers, which are typically used to cover the ship's stern as it makes rapid movements across the battlefield. The Tempest is also one of the few ships equipped with an Aura Tractor/Pressor Beam. While it can be used as a weapon, it more typically is used to aid the Tempest in its maneuvers. Lastly, the Tempest has a wide variety of point defense weapons to help it survive encounters against strikecraft, munitions, and other close range threats. This array notably includes half a dozen concealed cluster bombs. The individual starfighter squadron hangar bays have two blast doors. Five of the cluster bombs are randomly stationed right behind the blast door, making it a nasty surprise to enemies who attempt to board the ship through its hangars. A single cluster bomb is located randomly on the vessel in the shape of an ovoid blister common to the ship's other mon calamari-inspired components.

Carrying Capacity: The Tempest carries an average amount of starfighters for its size, housed in small hangars that only support a single squadron at a time. Each hangar includes several pressor catapults, a small tractor beam to help recover damaged craft, and a pair of blast doors constructed of thick Argentum Matrix Armor. Blast doors are shut when the hangars are not actively launching or recovering friendly starships. Typically an entire wing is composed of permanently stationed general purpose space superiority starfighters such as the X-wing or the Typhoon Modular Starfighter. The remaining two squadrons are typically mission specific assets or local units rotating out into the void for deployment. Internally, the Tempest carries only a single regiment and its equipment, roughly a third of the troops carried by the classic Imperial Star Destroyer.. These troops typically are only present for shipboard security, though they can be used for small-scale ground missions.

Miscellaneous Space Superiority Systems: The Tempest includes a number of individually small refinements that collectively make the Tempest a better space superiority combatant. This includes an internal compartmentalization system inspired by the Carrack Light Cruiser. Each compartment has its own miniature life support system, emergency power, and atmospheric sealing system, allowing the ship's crew better chances to continue work and survive even when the ship has been taking extensive damage. Another refinement is the inclusion of the Metis Sensor Array, which provides the ship with reliable sensor information and firing control solutions in areas with extensive sensor jamming. The Metis Sensor Array has also been linked to the ship's armament to with preprogrammed firing routines to initiate immediate, coordinated fire. One such setting automatically aims all of the ship's weapons in widespread and alternating patterns to make a 'flak wall' for use against massed starfighters and munitions. Another randomly selects a position on an enemy target and then concentrates all available weapons on that section to make chaotic and unpredictable strikes. The ship also sports several decoy launchers designed to launch large decoys like the LLD1-a1 ECM Drone or salvos of smaller decoys like the of Mimic Sensor Decoy, providing the Tempest with a means to obscure and mislead enemies. The Tempest also includes a Gravitic Amplitude Modulator, which can use to jam gravity-based sensors and communications devices.