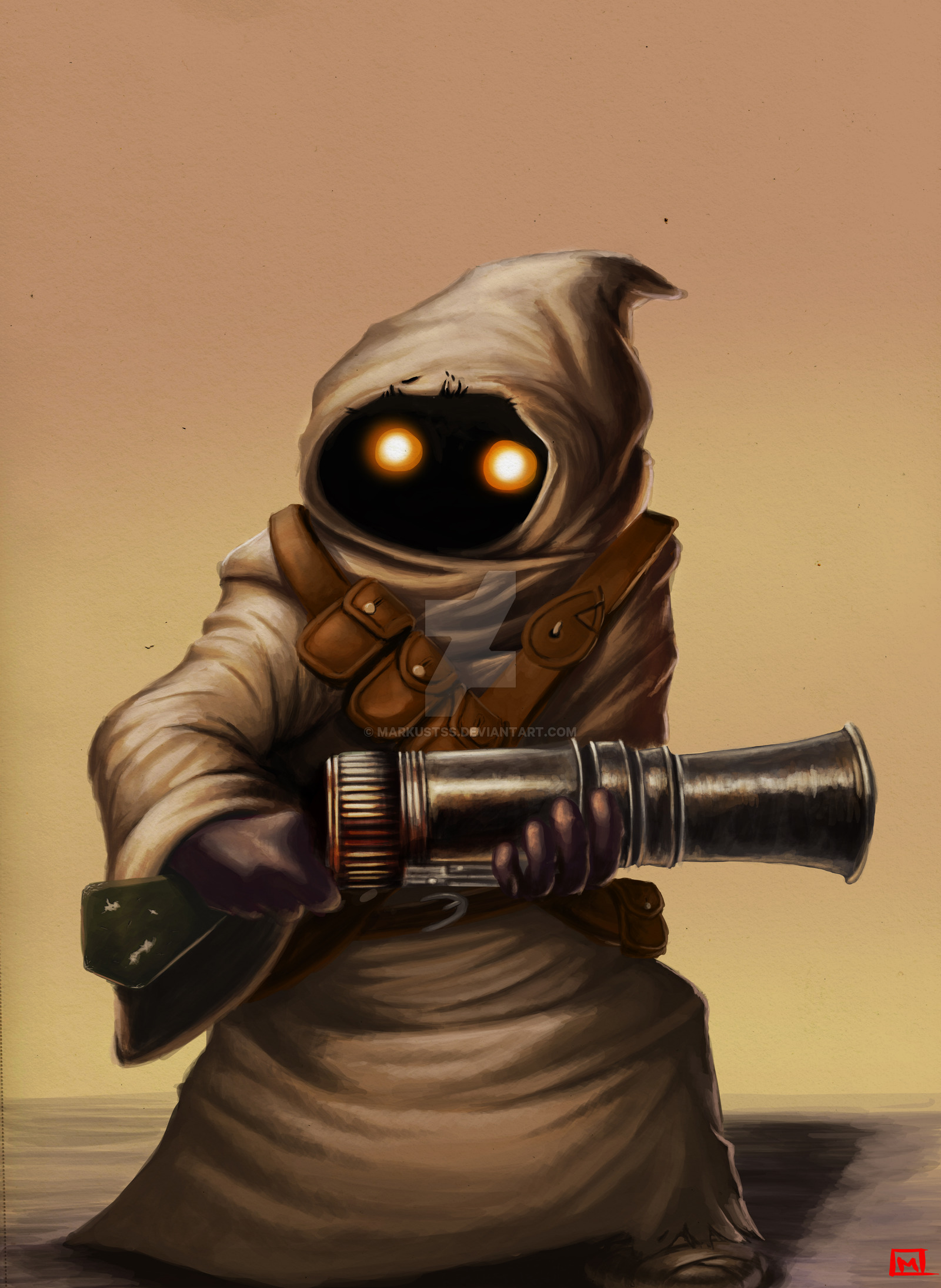 APPEARANCE:
Tek is a 0.8 meter short Jawa, instead of wearing the usual brown robe he wears the black variant to make himself look more mysterious. Some may describe Tek as "cute" but that depends on the person. His eyes shine crimson red and might scare you when if don't see the rest of his tiny body. He wears an ammo belt above his robe, his ion blaster and Scattergun are both strapped to his back with a rope. he has black cloth strapped to his feet to function as shoes. Tek has a high pitch voice making him even less intimidating.

BIOGRAPHY:
Tek was born in the third generation of free Jawa, on the space station 'Takiik'. Tek's great grandfather was the one who started the rebellion against the Hutt, who kept them as slaves on the space station. Tek was named after a brave Jawa that fought on the side of his grandfather when he died his grandfather wanted to honor him by making his name live on. Tek's clan was one of the only that lived in space making them very unique. Tek often spent his days with travelers who passed by the space station as they often had stories to tell and would often be easily persuaded into buying something. Tek was born as the son of the clan leader which meant that he had to partake in some of the important meetings his father had with his council so that he would learn from them. So that when the day comes that Tek takes over the clan he would be prepared.

On a typical day, where nothing should've gone wrong, and Tek was still a youthful (2 years old) Jawa, overflowing with questions and a desire for the obscure; an unusual Gray Jedi appeared on the space station Takiik. Too scared to interact with the Jedi, the Jawa left him be. Curious about the mysterious man, Tek strolled up to him and questioned the Gray Jedi about where he had come from, who he was, what his name was, and if he wanted to play, as well as if he had any stories to tell about heroic fights and the rescuing of the princess . . . but the man did not answer. He only handed Tek a medium-sized box. And then, he vanished into thin air. Tek had never seen force powers before, as not many Jedi passed through the space station, and so he was flabbergasted at the magic the man had just performed. Exited at his new discovery, he ran to his mother Akkik, who was just bartering with another Jawa for some scrap parts of a WAC - 47 droid that she could use to fix her own. His mom, more excited that Tek had made his first trade then for what he had obtained overlooked the box and ran to her husband (Tek's father) Hrak who is the clan leader of the Kkak clan. Tek could no longer wait, but there was a sensation inside of him that told him to keep it closed.

The Jedi appeared again 2 years later and with him be brought another box this one larger than before but still as mysterious. Tek was about to finish a trade with a dealer that supplied his tribe with droids and weapons, that is when Tek sensed something he was not sure what it was but, it made him feel strange and watched. Tek looked around him and that is where he saw him, the Gray Jedi. He walked over to Tek not saying a word only staring at him with his cold eyes. For the first time, Tek heard his voice. it was deep and sounded rough, this was the voice of a person who has lived through a lot. "Sit" those where the words he said, he waited until Tek did what he said and what followed surprised Tek, he began telling tales of his adventures in the galaxy. The man told his stories throughout the next days the Jedi told his stories he did not stop for questions, he did not eat and would not stop until his stories where done. Tek would sit and listen through all the stories, they fascinated him. They taught him what else there is in this large Galaxie. He learned about the sith the Jedi about the wars they have, he learned about the legendary Mandalorians and how fierce they are, he also heard tales about terrifying species that would eat men alive or such out their brains. After several days of listening to the adventures of the Jedi he stopped, then asked Tek to bring him the box that he gave him 2 years ago. Tek instantly stood up and ran to his bead where all his valuables were stored. He came back as swift as he could and the Jedi took the box, then the man and Tek exchanged boxes, Tek got the larger box and the Jedi took the small box.

What followed were years of training. The Jedi made Tek his apprentice, as the man was becoming older someone had to follow in his footsteps as a Grey Jedi that protected the weak. The Jedi thought Tek how to harness both the dark side force and the light side force. Many days passed and with them, Tek became quite good with his force powers however he was still not able to use the lightsaber as he would often trip or hit things around him (That is why he used a fake lightsaber to not harm himself). However how to fight is not the only thing that the Jedi through his apprentice, he also needed to learn Basic as not everyone on the Galaxie could understand Jawa trade. Inside the larger box that was given to Tek by his master, there where two items that would help him on his journeys. One was a Radio which had one channel only, this is what Tek used to learn basic as he would listen to the people on the radio and the Jedi would translate the words. The second item was a digital map of the Galaxy wich would guide Tek to all the other planets. The Jedi grew older and soon Tek could tell he was getting weaker and more brittle, he was growing worried as he saw the man as his second father. And so the day came that the man did not show up to training in his place he found the box and a letter.

SHIP:
Starcrawler which was given to him by his father
He also owns a Jung Ronto that he stole from one of the traders passing by the space station


ROLE-PLAYS:
None
Last edited: Jan 23, 2020
I fight for the small and the weak because together we are stronger
You must log in or register to reply here.