Character Bio
Vityr stalked the halls of the Academy, avoiding the gaze of as many individuals as he could as he awaited an order, an instruction, anything which would give him something to do. He had spent the morning training but beyond this there was little for the changeling to accomplish, no hand to guide him like he so dearly needed. A weapon, a tool, he was little more than a creature for the Empire's bidding, an animal for all intents and purposes, and on downtimes he did not know what to do with himself. The Apprentice Tournament had ended the day before, in which he had excelled and yet none had stepped forward to claim the acolyte as their own. Not that it mattered, he was younger than the average acolyte, nevermind Apprentice, he just found himself shot for patience when he lacked a task.

His eyes settled across the room he had ventured into, one of the low set antechambers within the Academy on Korriban, several levels below the sandy ground. The ceiling was high vaulted, dust crumbling down in small flurries with each step he took, the noises from the surface drowned out within the thick sandstone. In the centre a throne could be found, half broken and lost with age. Vityr neared it and sniffed, a natural animalistic instinct he had, never fully able to separate his human and dark wolf forms. His shoulders rolled back with a small crack as he resisted the urge to transform there and then, instead reaching for the vibrosword at his back; this was as good a place as any to relinquish himself of his urges, and training was one way to vent it lest the beast break free at an untimely moment.

Shifting the blade into his hands he turned and faced the room, blinking as he adjusted to the shadows, eyes piercing the darkness. His stance was relaxed yet in many ways structured, able to turn deadly in a moment's notice. He swiped the blade through the air, shifting on the balls of his feet as he adjusted to the momentum, feigning attacks on the air with short bursts of breath and low guttural growls to accompany. Why do I keep him locked away? There is no one here to see, no one here to destroy, I should not contain it like I do. But those were his orders whilst within the Academy, and Vityr knew better than to break the orders of his captors. 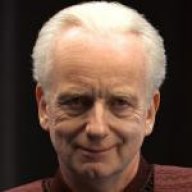 As the display continued there was only silence and, tellingly, shadows. Finally when the boy paused there came an ironic clapping. On the throne, perhaps there all the time, perhaps not, an old man was sitting. His dark red robe looked like blood in the dim light as he sat watching.

"An impressive display, I am sure. I have watched you, boy, watched you yesterday in the tournament, watched you since you arrived. You are, as ever, a curiosity, a puzzle. Yes, a puzzle. What is the boy hiding? What shall be said to him?" This last was apparently to himself.

He looked up at Vityr, eyes piercing. "So, boy, who is your Master? Surely after your dazzling display yesterday you would have been the first chosen as an Apprentice?" he asked, half mocking. "How will he answer? A fury and a snarl?" he added to himself.


The noise rang within his oversensitive hearing and caused him to clench his jaw; in annoyance, or pain? Turning swiftly the boy faced the throne, pinpointing the location of the voice which had just begun to speak; the blade expertly controlled as he swung around and aimed it at the man.


That is, until he realised just who the man was.


A Sith, high ranking from the look of it.


Begrudgingly he lowered the sword, but kept up a wary, defensive presence. Vityr did not like strangers, he did not like ranked Sith whom he had never met before, especially if they tried to command him. The latter was more due to the fact that Vityr knew he had to comply, that or die.


The man’s self-speaking caused the lad to furrow his brows. Why was he talking to himself? With a slight growl the boy replied to the question presented, before hearing the underspoken words meant for the man himself.


“No one” he snapped, his patience already shot. Vityr had to get back to training, he had to channel his urges… So many urges.

“No one? What a shame. And I expect you thought they would be lining up to make you a Sith?” His mockery was matched only by his apparent apathy, sitting back on the throne.

“Do you want to be a Sith, boy?” The answer was obvious of course, but it pleased Shadow to draw things out, make @[member="Vityr"] say his desire.

Character Bio
[Sorry didn't get this through ]

Vityr tried to ignore the man after a few more sentences were uttered by him, but impulse made it impossible. He had been raised to listen, to follow, he was little more than a tool in the arsenal of the Sith Empire and he knew it. "No" he snapped; just because he had to comply didn't mean he had to be pleased about it. He began to move away from the man, clenching his hand further around the blade as his annoyance grew, moments away from telling - or forcing - the man to be quiet.

"I'll be a Sith one day" he murmured to himself, truth be told it had not bothered him when no one stepped forward - most Sith knew he was more beast than man, they knew that should they require his services all they had to do was command him to do what they pleased. "Let me be" he growled, the blade soaring through the air in a sweep toward one of the pillars, hacking off a chunk of the sandstone yet in no way hindering the structure of the building.

Shadow looked extremely unimpressed by the casual architecture destruction.
“Let you be? Why? I see nothing but a boy who cannot control himself, who thinks waving a weapon around is impressive; it is not. Any fool can attack a wall, but only a fool would do so.”

“Your overconfidence in your abilities and your certainty that you will be a Sith is misplaced. Show me why you should be a Sith.”

The Shadow rose and looked down at the boy, towering over him. The Sith Lord’s own lightsabre appeared in his hand but he did not ignite it. Not yet.

Will the boy dare? What is his plan?

Character Bio
Vityr at this point was close to losing his cool. Not once had he claimed to be a Sith, not once had he tried to be impressive with the blade in his hand. No, this Sith was presumptuous. Vityr knew his place. ‘In the Kennels’ he mused, but that only made his anger worse. Instead he turned on the man, uncaring for his special laser-sword. When the man towered over him the boy growled again. “If I had no control you would know about it right now” he snapped, it taking every ounce of his willpower to resist transforming into the beast he truly was.

But in the end his control snapped and the boy released a blast of potent force energy from the centre of his being out toward the man who had interrupted his training. Before he could reign himself in however he leapt forward and when he landed his form had shifted to that of his dark-wolf skin, shoulders rolling as he prowled forward, leaving shredded clothes behind. His head was low, the menacing growl which escaped him rumbling. In this form his scale was much larger, his ears pressed back. But even now, even in his bestial form, Vityr held on to a shred of his willpower, refraining from attempting to lock his jaws around the throat of this old man who stood before him.

The Shadow laughed, the mocking sound echoing as the young shapeshifter morphed. The Sith Lord deflected the assault and clapped mockingly, still holding his lightsabre.
“And so the beast is revealed. Your lack of control is apparent. If merely a few words throws you into a rage then how will you ever be a Sith?”

Still, the Sith Lord was interested. A true morph was rare, and this boy had become a fearsome wolfen whilst still retaining some control of himself. It was very interesting.

“Sit,” he ordered smugly, as though the boy was a puppy. “You might be useful to me, and the Sith, if you can focus your aggression. I will take you as my Apprentice, and if you survive…you might be worthy of being a Sith.”

Character Bio
The boy began to prowl closer, sniffing at the air to get a good lock on the man’s scent, before growling with his teeth bared. His words did not hurt the boy, for he knew it to be true. Truth be told he never expected to be a Sith, he knew his place, and no matter how many Apprentice Tournaments they placed him in, no matter how many he won, he knew nothing would change. He was an animal, a beast, theirs to contain and control. This man’s mockery was nothing new to the boy.

When told to sit, whether the Sith knew it or not, he was compelled to do so due to the imperative used. It was clear he did not like being ordered around by those he did not know, however, and as such his glare was turned towards Shadow. He did not say anything, he did not do anything, he remained in place where he had been told to sit and listened…

@[member="Vityr"]
“Good.” The Sith Lord looked down at the wolfboy. “Transform yourself back when you are prepared. I will teach a boy, not an animal, and then gather whatever things you need and possess. We shall depart this planet in three hours.”

Shadow, as a senior Master in the Sith Empire, had acquired a small corvette for himself. The small ship suited him as it was easier to control and slip in and out of places than a huge Star Destroyer. The crew of the warship had been rendered loyal by carrots and sticks, and his regular contact with Darth Kyros ensured he had an adequate revenue supply coming in to finance his projects.

Paying the boy, whose name he did not even know yet (or had not heard anyway, he likely had examined the roles of the training areas), little heed, Shadow left the chamber and headed for his ship. Whether the wannabe apprentice appeared with Vityr’s responsibility, not his.

Feed the beast! Or... bandage the beast. Pick a metaphor.

P
Beauty And The Beast

Beauty and the Beast