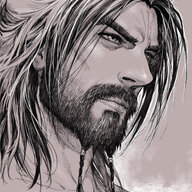 
STRENGTHS AND WEAKNESSES:
Lightsaber Duelist - Dueling is one of Talon’s greatest strengths, especially in a lightsaber duel. As he was focused in Makashi, he tended to comfortably switch to Soresu and Djen So while utilizing the aggressive mobility from Ataru.

Drunkard - Everyone has their vice, and unfortunately Talon is very much a drunkard. Even when he’s supposed to be sober people often mistake him to be drunk still.

Force Control - Talon’s primary focus within the Force was the Control aspect and is renowned for his extensive use between simple body enhancements to increase his speed. It hasn’t been officially confirmed, but supposedly his expertise in body control of his own has allowed him to tap into healing properties onto himself. This was only suspected in light of how he can sober up no matter how drunk he is.

Sarcastic to a Fault - Sometimes (most of the time) when Talon drinks too much, he often finds nearly all situations hilarious and can be the laughing stock in the cantina. However, Talon’s sarcasm has earned him the usual boot out of the cantina as some hot tempered lad always picked a fight with Talon. So at least to say most of the time that he enters the cantina, you can be certain that there will be fists exchanging.


APPEARANCE:
Describe your character's physical appearance. While your avatar should represent your character's appearance, there might be some things not apparent in it for use in role-playing. Height, weight, eye color, hair color, and skin color may also be listed here.

BIOGRAPHY:
Describe your character's backstory up to the point you started RPing him/her. Be sure to update this section as the role-play continues.