Character Bio
Intent: This is the type of battle armor my character Asemir Lor'kora wears. The full article can be found here. 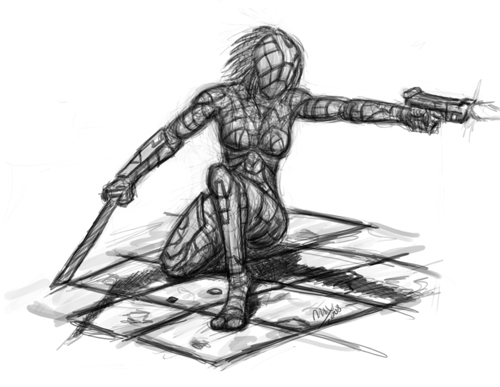 The Specter Armor is an advanced suit of nano-armor worn exclusively by the Ghost Commandos of the Xedael Empire. The armor is comprised of a bodysuit interwoven with sensors and a layer of nanomachines. These machines act as the actual armor component, and provide the majority of protection afforded by the armor.

The bodysuit is composed of two components: an upper torso/arm covering and a lower torso/leg garment. Each of the pieces seals seamlessly with the other, creating essentially a one-piece garment. When worn, every portion of the wearer's body is covered, save his head, hands, and feet. Separate gloves and feet stockings cover these exposed areas.

The bodysuit is matte black, with traces of circuitry and sensors woven into the material. The material is tear and fire resistant and is capable of stopping low velocity projectiles, such as shrapnel. In addition, the bodysuit is breathable and has a degree of climate control built into it.

The primary protective component of the Specter Armor is the nano-armor portion. Composed of trillions of microscopic machines made from Force-imbued metallurgy, the nano-armor flows over the bodysuit and is controlled through the embedded sensors and the mental projections of the wearer. The nano-machines are powered by bio-energy derived from sugars, fats, and water absorbed through the environment. This was a design choice specifically created to facilitate the Ghost Commando's preferred method of psychological terror.

The nano-armor component is capable of forming protective plates and barriers strong enough to deflect and absorb most attacks from personal weapons, and if given sufficient preparation, even resist glancing blows from vehicle-grade weapons. In addition, because of its structure, the nano-armor is quite resilient, capable of repairing itself and retaining its structural integrity. However, despite these capabilities, the armor cannot survive direct hits from anti-vehicular weapons. It is not designed for frontal assaults against fortified positions, but for infiltration and commando missions. Additionally, like all properly designed battle armor, Specter armor acts as a type of Faraday cage, protecting its user from electrical discharges and EMP effects.

The nanomachines also give the Specter Armor its mimetic camouflage ability. When activated, the nano-machines can change the armor's shape and color to match the surroundings, thus increasing the wearer's stealth ability. The armor is also capable of limited thermal camouflage, in which the nanomachines generate or absorb heat to match their surroundings. These effects do not render the wearer invisible, though, but merely convey enhanced stealth performance.

The nano-armor covers every portion of the wearer, including the wearer's head and face. Understandably, this is an unsettling experience, one which the wearer must become accustomed. Generally, the wearer's (who are almost always Ingr'Nysk) tera are exposed to allow the sensory organ to gather information from the environment. The armor is, however, capable of full environmental isolation. The "helmet" of the armor contains an enhanced imaging suite, as well as advanced sensors and communications devices. In addition, the armor is capable of limited chemical and biological toxin filtering.

The on-board weaponry consists primarily of whatever melee weapons the wearer decides to create using the nano-machines. Claws, stabbing devices, etc., are all valid instruments, as are ropes, lock picks, and so forth. More complicated items, such as fire arms and explosives are outside the capabilities of the nanomachines.

The Specter Armor also gives its wearer enhanced strength; the exact enhancement is based on the focus of the wearer. Specifically, if the wearer were to focus the nanomachines to only enhance his strength at the expense of armor protection (and other abilities), the enhancement can be quite extreme, upwards of five hundred percent of the wearer's usual strength. However, in typical wear, the armor along easily increases strength by fifty to seventy-five percent. Additionally, the armor acts as a medical monitoring device. The nanomachines are capable of sealing most wounds and other first aid skills.

Availability
The Specter Armor is decidedly rare, as can be evidenced by its extraordinarily high price. This high price can be attributed to the difficulty in manufacturing the necessary components, as well as the high cost in attaining the materials needed to create the nanomachines. In fact, the Specter Armor is almost never found outside of the Null Regiment. Additionally, without a significant degree of Force talent, the armor is unwearable, contributing to its exceedingly rarity.

Classification: Other
Weight: 50 kg
Quality: 6 (The armor is produced to extremely high production standards, but is not designed to make the wearer invulnerable.)
Other Feature(s): (see description)
Asemir's Bio

Character Bio
So the first topic at hand we'd like to discuss is the nanotechnology and applications therein. As far as crafting a suit from nanoparticules, we don't find any objection. We are concerned with the suit's ability to make weapons and other items up on the fly. The results of the Gulag Plague that swept the galaxy and plunged it into four hundred years of darkness means that technological progress was minimal, in part because there were no wars or conflicts to be fought, which are generally the driving forces behind such developments.

​The second point we'd like to cover is the suit's availability. It seems somewhat contradictory. The suit is listed as a production model, not yet in mass production. Yet it's cited as being "rarely seen outside a Null Regiment", which implies it's already seeing deployment.

We'd like to see the latter point cleared up. On the first, we feel like basic claws or stabbing implements should be the functional limit, in light of the suits other properties and benefits.

Character Bio
Thanks for giving me a second chance with this. I greatly appreciate it.

1) Regarding the ability to make weapons, I've always envisioned it as similar to the T-1000 from Terminator 2. Specifically, only basic stabbing implements/claws are available because anything more complex is way outside of the ability of the nanomachines. So, if the wearer wanted to make a handy knife, he could do so, or perhaps he might want to sharpen his fingers in preparation for a melee brawl. But he wouldn't be able to build a bomb or gun or whatever else. Something as simple as an analog clock would also be off limits. Interconnected moving parts would be too complicated. I believe this point was posted up in the submission.

Finally, I need to point out that this armor (and I as well) obey the conservation of mass. If the user were to make a thirty kilogram warhammer from the armor, then that mass would have to come from elsewhere, resulting in a weaker overall armor scheme. So, it would be impossible for the wearer to make a giant sword and still maintain structural integrity. I did not include this point because I felt that it was self-evident.

2) At first reading, you are right, this does sound contradictory without proper context. The Null Regiments are extremely small in number. Null Regiment Prime consists of exactly five individuals (three of which are now dead). There are at best 20 active Ghost Commandos at any time, and so that would limit the number of Specter Armor in use. And when Ghost Commandos die, they typically die in a spectacular fashion that precludes recovery of their gear. So, the armor is deployed, but only in extremely limited numbers.

If necessary, I will clarify that point even more in the submission, but that will have to wait until tonight.

As an aside, I should point out that this armor doesn't make the wearer invincible. Far from it. I've had three individuals of Null Prime, all wearing armor, killed in various ways because of how the writing was done. Two died to Dark Lords who were far less powerful than Asemir, while one died to a deranged otter-assassin (long story). Asemir himself was nearly killed because the other RPer found a way around his armor (but only because of some IC events and exacting circumstances). Finally, the entirety of Null Beta was killed by a single RPer. So, the armor does not make the hero; the writer does.
Asemir's Bio

Character Bio
Thank you for clarifying these points for us, as these were sticking points for a number of us.