The Second Sparklord of Mecha 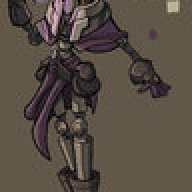 Sparklord of the Second Great Sparkline STRENGTHS AND WEAKNESSES (Required: 2 Weaknesses Minimum) :
STRENGTHS
I've Seen it All: As an old being, and the oldest Mecha on Mechanus, Second Sparklord is a very experienced combatant and strategist, gaining knowledge ever since he was copied from HK-36 during old Republic to serve as the Guardian of the Jedi. He knows plenty about history of the Galaxy, as he lived through a big chunk of it, from time to time visiting the cosmos at large before Mechanus totally isolated itself from others.

Hive Mind: Due to the high speed connections each Mecha on Mechanus have with each other, he is able to almost instantly communicate and give out orders to other Mecha.

Jedi Teacher: The key component of Second's personality is that he is a protector and a teacher. His role is to make sure Mechanus will survive and the knowledge they have accumulated will be passed on. Due to this, he loves to teach and he can be very affectionate and carrying to his followers, always open to helping them out or telling a story. Such was also true for organics he knew, back when he was still interacting with them.

Mechanus Shaman: Second is considered to be the top shaman among Mecha. Due to the lack of connection to the Force the Mecha have, his magic and rituals are based on technology rather than the Force. Second always carries a collection of energy devices and vials filled with numerous mixtures in order to practice his "magick" with which he can repair other Mecha with salves, project fire or energy from his hands at his opponents, or immobilize his enemies with a cryo spray.

Body is Only a Vessel: As most Mecha, Second's vitality focuses on his mind and conscience rather than his body, his body can be destroyed but his conscience can survive among the many Mecha Memory Banks, downloaded into another body so he can fight once more. He can also exchange his body for a newer one, or one better fit for the scenario he is facing.

Wise Leader: As the oldest Mecha on Mechanus, and experienced Guardian, Second is recognized by other Mecha as a wise and just Sparklord, most trust his judgement and decisions.


WEAKNESSES
Force Absent: As a mechanical being, Second can not use or sense the Force, equally, he is much harder to be sensed through the Force.

Lightning Vulnerability: As a mechanical being, Second if vulnerably to electric and ionic attacks, they could stun or knock him out if he is nor prepared against them.

Ageless: Second does not age like organics do, and he has seen many of his organic friends die, this fact makes it harder for him to make bonds with other organics, as he is most likely forced to watch them die while he moves on.

Fighting is Beneath Me: Second often considers melee fighting to be something beneath someone of his stature, he only joins the fray when it is completely necessary, instead, he prefers to direct the troops or visit the battlefield in his avatar vessel, a giant mechanical eagle.

Isolationist: Due to the betrayal the Jedi and the Republic backstabbed the Mecha and Iron Knights with, Second does not trust them anymore, nor he trusts any other organics out there. He believes that to protect his people, they have to stay shut off from the rest of the Galaxy, hidden and out of the way of the war.

Any Means Necessary: Second is the Protector of his people, and he can go to great extend to fulfill that job. If it means never again interacting with the Galaxy, so be it, if it means that he has to silence some of his own people in order to keep things under control and from spilling over, then it is something he has to do.

Pompous: Second is the oldest Mecha on his planet, and he is not afraid to rub it in others' faces, reminding them many times and making sure that they get the point of him having more knowledge and experience than them.

He does not possess a ship, however, his avatar is a giant mechanical bird he can use as a vessel, it is flyable.

BIOGRAPHY:
HK-36-2 was created during Old Republic, as a copy of HK-36 when the droid was lost during one of the Sith raids on the Jedi temple he was protecting. The Jedi thought HK has been vanquished, they made 2 from back-up body of 36 and copy of his memory. Ever since, 2 has stayed with the Jedi as their Protector while 36 was recovering and trying to find his way back.

2 took over 36's duties among the Jedi, serving as their teacher and trainer, shaping up their skills in lightsabers and the Force for the upcoming battles with the Sith.

He kept these duties even as 36 returned, the original droid took on more offensive role, supporting the Jedi in counter-attacks against the Sith while 2 stayed behind in Temples to ensure their safety.
2 became one of the five founders of the Iron Knights when the sect was created by 36, becoming second in command, he often planned out the battles and led strategic command of the Knights.

He was on the Temple of Coruscant when the Jedi ordered Iron Knights to be shut down soon after the Knights battled a Force Wound and army of Force Zombies who tried to raze the Temple. He was the one who erased the Knights from the Jedi libraries and covered up traces of the Knights while they made their escape, disappearing to Mechanus they have been preparing for a longer while as their haven.

On Mechanus, 36 soon disappeared after all remaining Iron Knights gathered and made contact with the Khazund who resided on the planet. He went back to traveling the Galaxy, leaving the four remaining Iron Knight founders in charge of the refugees. Second lead the negotiations with Khazund, setting up their trading and cooperation agreements, personally teaching to the Khazund plenty of the technological marvels the Iron Knights brought with themselves to their planet.

When it was settled that the Khazund would share their planet with the Iron Knights, now renamed Mecha, and Mecha would live underground, Second cooperated with the Fourth Sparklord in order to set up the systems of their energy plants, foundries, and memory banks, Second taking on as his duty to make sure that all Memory Banks and Libraries are well-managed and keep on functioning.

Currently, Second is a wise yet bitter Sparklord, caring deeply for the future of his Mecha, yet still angry at the Jedi and the Republic for their betrayal.

Character Bio
I am so very interested in this storyline, you have no idea.

Character Bio
Very cool. Looking forward to seeing him in action and how his story goes.

The Second Sparklord of Mecha

Well he might not get an appearance for a while, hopefully, I'll get to tie in the start of the quest to find Mechanus in Marks of Chaos 3, just made the sheet ahead of time to be ready

I wouldn't mind having others play the other 4 Sparklords, if you would be interested, I could pm you their short background and info as it happened in my previous community, except the First Sparklord, since it was originally 36's spot, once he disappeared they have started choosing Mecha at random to take his spot on the council for a term
You must log in or register to reply here.
Share:
Share
Menu
Log in
Register
Install the app
Top