So I hear you want learn? 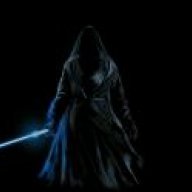 It had been several months since the raid on the Jedi archives that nearly cost Cirk his life in saving several Jedi and it had taken a long time for him to be ready to leave the Med bay, let alone leaving the planet but it was something the mysterious woman said during the raid that brought him to this planet, the planet that he had never been to before. Eshan, the planet of the Echani a race that he was curious about to begin with but he was brought here to met someone else. "The leader there - she will teach you something of worth." He had been to proud for awhile to admit that he need to learn at all. But he need just from the look of the woman that he could certainly learn alot from her.

He lowered the ramp of his ship Fallen Hawk and walked out into the Eshan plains. He looked around, curious to where this leader be, and who she was. He opened his robes and felt his large cloak swishing in the gentle breeze, his hood off his face so his short stubble itching his skin, his short hair swept back and his keen eyes searching hard. His lightsaber, his unique, interlocking hilt with a blue and green crystal in the individual blade, strapped to his belt, with two extra single bladed lightsabers attached to the back of the belt.

He stood, waiting patiently for the leader to meet him here. Curious to what he would be taught, curious to what he could learn. Even more curious to find his limits, possibly improve his ability in Healing others. All these thoughts and more were rolling around in his head.