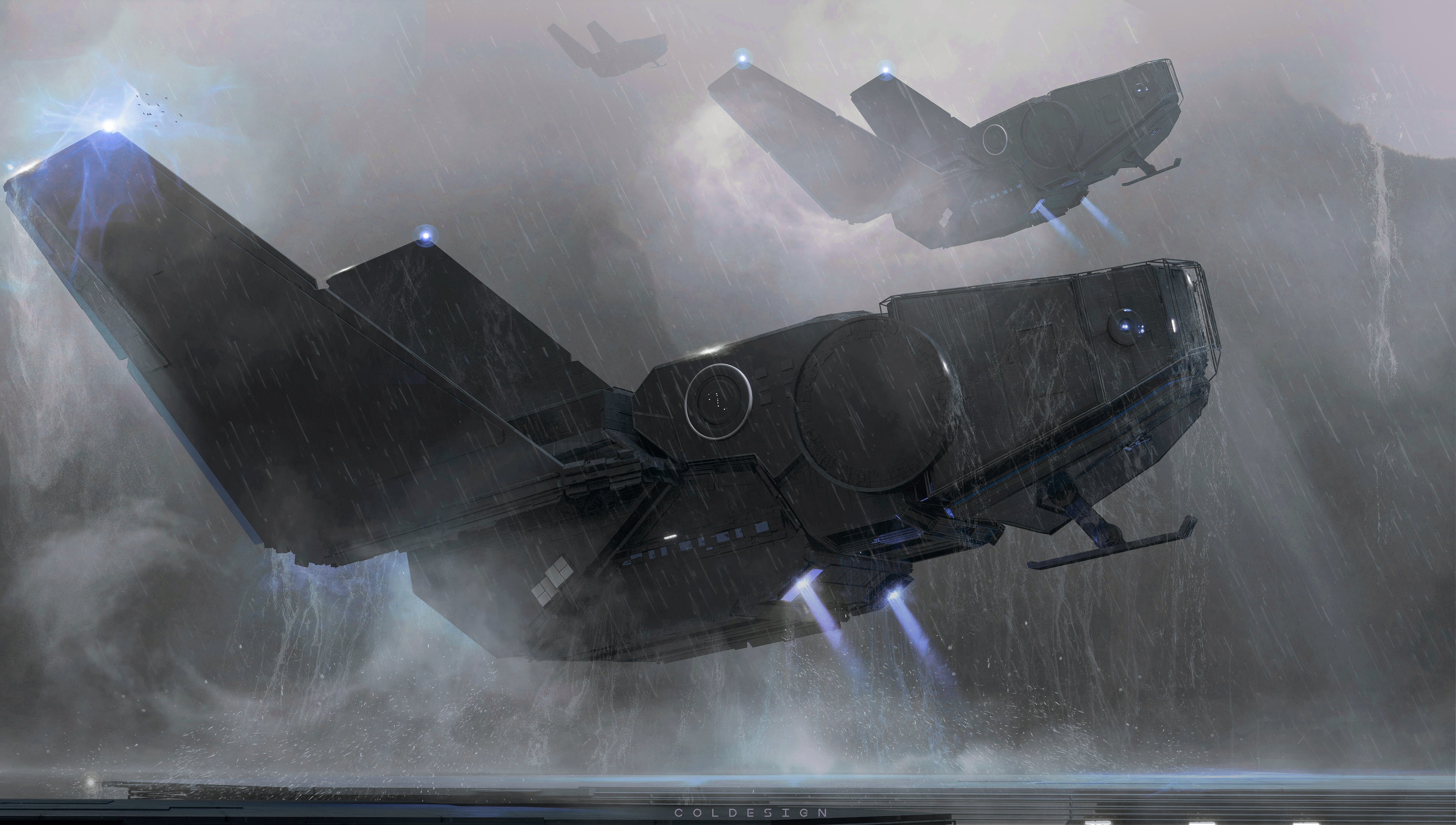 In 825 ABY, the leadership at the Federal Cooperative directed a design team on Nubia to work on a new transport. They wanted a new design that could compete as a strategic spacelift, and they wanted the design to break the mold of simple and reliable design, they wanted something more memorable. The design team at Nubia were excited by the opportunity.

Early on they decided they wanted to build a ship that could handle difficult situations. An early scenario that came-up was the idea of a dropship opening its cargo bay doors during atmospheric re-entry. This act could tear some starships apart immediately. So the design team wanted to reinforce the structural integrity of the future ship. They opted out of durasteel and instead chose to use a new composite material. Preliminary test results demonstrated the composite material would provide greater resilience to extreme heat and kinetic attacks than durasteel.

To further increase the operating life of the future ship, the design team would coat the whole thing in Carbonite, to slow down the incremental degradation that results from repeated planet re-entries over a ship’s lifespan.

After hashing out a general vision for what would eventually become the Snapper-class, the design team broke into two, than three teams:

Team A were charged with the designing the hull, and the idea they would come-up with, would be far from “simple and reliable.”

One designer presented a bold vision. The design would include two hull sections: a primary hull which contained the main bridge, and a secondary hull which contained the cargo hold, and the two hulls would be designed to be able to separate and operate independently. This could be used when a Snapper took critical damage on one end, and the other side needed to separate to avoid complete destruction. This bold idea was a pain to get right. The idea went through seventeen iterations until they got the prototype to successfully separate without a hitch. The same designer had another idea -- what if they could re-connect. This cute idea would take an additional thirty-nine iterations - or four years, to make work. But ultimately they were able to get the Snapper to separate, and most importantly, to reconnect.

One problem with the final design, the primary hull, also known as the, the Head, had no armaments, while the secondary hull, referred to as, the Body, had no hyperdrive system. But they had accomplished what they wanted. Each hull could operate independently as a subpar ship.

Team B was charged with the cargo hold and defense systems.

The cargo hold was a simpler matter. The Snapper was designed to load and transport vehicles and equipment from one conflict zone to the next. The cargo hold was designed to accommodate vehicles that weren’t necessarily stored away in neat boxes that could be stacked, so instead grooves were fabricated into the walls of the cargo hold, where additional plates of durasteel could be installed and removed as necessary, to adjust the number of floors in the cargo hold. With this simple feature, the Snapper can increase the number of Tactical Enforcers in its hold from 35 to 210 units, by adding five floors in addition to the ground floor of the cargo hold.

Team C emerged from Team A when a group of designers wanted to install a hangar bay in the primary hull. After some debate they were able to convince the rest of the team to get onboard. The roof section can slide up two levels, self-contained behind magnetic shields, to reveal two flight decks where starfighters can launch from. To the chagrin of Team A, they were able to figure this out in three months. Team C would rejoin Team A, and assist them with their task for the duration of the project.

In 830 ABY during a trade show the Federal Cooperative would go on to impress the Republic high command with a concept demonstration of their prototype Snapper. A year later the Federal Cooperative would win a contract to design a new armed transport for the Republic. Technical details of the future Snap-class were refined, until it finally entered into limited-production in 836 ABY.

Last edited: Wednesday at 5:31 AM
You must log in or register to reply here.