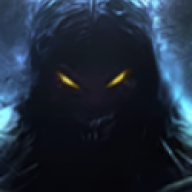 + Hard Target; While hidden within his Illusionary Form, Shaco is capable of being on the receiving end of attacks that would kill others... though, an attack to his illusions foot would prove fatal. (As this is where his true form resides within the illusion.

+ Dexterity; Shaco is a nimble creature and has adapted his natural speed and agility into even the most basic of tasks. The lack of strength that he possesses has forced the man to become reliant upon this trait while in combat.

± Malicious; a trait that can at times benefit or hinder the Croke.

- Tiny; the fact that Shaco's true form can fit within the palm of an average human makes him extremely vulnerable.

- Vulnerable to Cold; Due to his small oily frame, Shaco is incapable of surviving within cold climates for extended periods of time.

Like most of his species, Shaco, is a being of small stature... his oily black skinned body moves about on eight legs similar to an arachnid, they too are black though covered in what appears to be a thin layer of hair. Being able to fit within the palm of most other species within the galaxy, though with the aid of his mastery of illusions he places the appearance of a hulking menace into the minds of those that he interacts with. While, he is capable of utilizing other forms of varying height and weight... Shaco has come to love the form that properly reflects his inner-self.

Having never been introduced to the fabled weapon, Shaco, does not possess any knowledge regarding how to wield a Lightsaber. Learning the art of wielding the blade is something that the Croke is quite adamant about though.

For years, I have fought to protect my people from the Lugubraa... As the Shell Conjurer, It was my duty to protect the Nestlings... In the end, it turns out that all of my efforts had been in vain. Those damned leeches are unstoppable. I tried to evacuate them all... to make sure that at least the next generation would at least be given a chance to live, as they had yet to even emerge from their eggs. All of them, not a single one was able to make it out alive... Yet, here I stand. Alive.

What does that say about me? Am I a coward for fleeing when the opportunity presented itself... or is it simply that I'm an opportunist who takes advantage of the path laid before me. I like to believe it is the latter, though I guess I'll have to wait and see what the future holds. Hopefully, I can redeem myself...

This is where I'll list the updates to this thread.

The Journal will have more entries added, I simply wanted to get this up before I never do...Not to mention, the addition of an in-depth description of his personality.
Shaco's Bio​

Wow, this is a very interesting concept. Hope you enjoy it! Hopefully I never have to step on your toes

Thank you! Though, seeing as how Shaco is only aligned with The Order of the Black Hand, a faction that we're both in... then you should be fine. XD

EDIT: I've added his Force Abilities and expanded some aspects of his profile briefly. Still more to come though, regarding the Journal Entries.
Shaco's Bio​

Ebenezer (Scrooge), the Croke of Many Things

The Maw of The Jungle