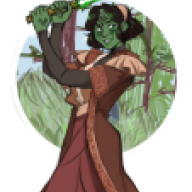 General Information
Name: Seaja Linata
Age: 16
Gender: Female
Species: Mirialan
Alignment: Lawful Good
Birthplace: Mirial
Abilities: Seaja is a skilled negotiator, and an empathetic and even-keeled girl who can keep her calm and keep her head about her in tough situations. A rather naive person, she is very trustworthy and even more trusting. Unfortunately inclined towards a bit of a martyr complex, Seaja is naturally inclined to make sacrifices for other people's sake. However, during the years of her independence, Seaja's heart has hardened somewhat -- she struggles to connect with the compassionate powers of the Force now more than ever before. Seaja is a talented thief and capable in melee combat or in a firefight.
Weapon: After the time of her apprenticeship to Voph
Interests: Finding peace, exploring the Galaxy, helping people, social sciences and psychology, ecology.
Likes: Working out/training, learning, reading.
Dislikes: Getting in fights. Biography:
Seaja was transported off planet at a very young age and sold as a slave to a pirate. Her owners realized her latent force powers and forced her to use them in his employ, teaching her to fight, steal, and lie. Seaja became a leader among the slaves on board, a caretaker who kept everyone safe. She watched many of her friends die either in service to the pirates on the dangerous missions they took on, or at the hands of her cruel masters over the years, a trauma that continues to haunt her.

Seaja and many of the other slaves plotted their escape, knowing that if they did not get free they would eventually die like the others. They made good with their plan one night, but unfortunately the group was apprehended and brought before the pirate captain. Determined to teach the other's a lesson, the captain began to beat the slaves to death one by one, forcing their compatriots to watch. As Seaja watched the old criminal take out his rage on one of her friends, the light fading from the slaves eyes as her tears mixed with blood, something inside the young Mirialan snapped. Fueled by blinding rage, she lashed out with the force in a reckless fury. Tearing, clawing, hurling bodies this way and that, the girl fought until all of her energy was spent and she fainted amid the carnage.

When she awoke, Seaja looked around to see that in her anger she had killed every last soul aboard the ship, including all of her friends. Horrified and confused at the dark energy within her, Seaja fled the scene of her crime and entered the Galaxy as a free individual for the first time, searching for a way to atone for her crimes and serve something greater than herself.
Last edited: Jan 25, 2021
You must log in or register to reply here.
Share:
Share
Menu
Log in
Register
Install the app
Top