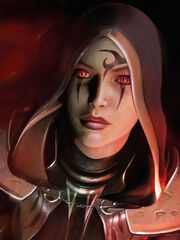 BIOGRAPHY:
Born on Kesh to a mixed family Satiri quickly learned that beauty was everything she needed to get her way. However, at 12 she was taken for her home and enrolled in the Zoist academy where she stayed for five years. while on Zoist she continued to use her substantial beauty and graceful form to get her own way. However, things became terribly difficult when she had a run in with an admirer who also happened to be an instructor. The instructor made advances to which Satiri resisted and was given the death sentence as a result. Her executioner was @[member="Talon Vosra"] (who still owes me coffee) who had pity on her and secretly took her to Metalorn for training as his apprentice.

She quickly feel in love with the older Sith and started making advances of her own. Talon did not reciprocate her feelings and treated her more like a child than the woman she had become. He left Metalorn and went to Charros IV and shortly after that he sent her a message telling her to go back to her family and leave the Sith life behind. Instead of listening she decided to Stay on Metallorn and await his return.... Character Bio
I have a bad good feeling about this.
| Voices | Your crazy I bought the coffee last time! Oh and your writer account is a boy do you have something to tell me?

You can buy again! And maybe.