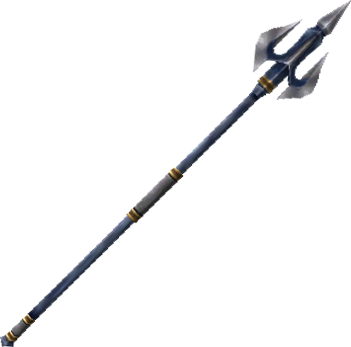 Image from Final Fantasy XI
Intent: To create a unique cultural weapon for the Eldorai which is both different and yet balanced. Tying in with their history, this weapon is less effective than a lightsabre, but still a viable weapon for those interested.
Development Thread: Yes[SIZE=11pt]: http://starwarsrp.net/topic/21655-eldorai-armoury-101-siobhan[/SIZE]
Manufacturer: Eldorai Armouries.
Model: Eldorai Polearm
Affiliation: Eldorai, specifically the Angelii
Modularity: None
Production: Limited. Only Angelii and field officers are equipped with this weapon.
Material: Durasteel et al.
Description: The Sarzmigar is an Eldorai polearm adapted from their ancient enemies, the Kar’zun. The Kar’zun were a powerful race of now extinct silicon based lifeforms living in the caves and mountains of Kaeshana’s wild uplands. During the final war to exterminate them, Queen Ariane the Great noticed the power and potential of the Sarzmigar as it outreached the traditional Sarix. After the war she had the weapon copied and it became a weapon for the Angelii.

At basic the Sarzmigar is a polearm version of the Sarix, with the haft and blade being protected by a force containment field set into the shaft and head. To prevent the head of the weapon being cut off the field extends part way down the shaft as well. The control to activate the field is set into the lower shaft. The Sarzmigar imparts a blue sheen to its head when activated. The field may be powered for up to an hour at a time, at which stage it must be recharged or the power cell replaced. Naturally both options are not optimal in combat so Angelii will often switch to their sidearm or Sarix when power runs out. A skilled operator can replace the power cell in as little as a minute, though naturally that is hard to do under fire!

The Sarzmigar head and upper shaft is resistant to lightsabres, blasters and projectile weapons whilst activated. Although it can deflect blaster bolts which hit, it is practically impossible to use the weapon to block these attacks deliberately and aiming is impossible. Against lightsabres the Sarzmigar can resist their attacks but duelling is made difficult by the length and weight of the polearm compared to a lightsabre. Still, an elite Sarzmigar user could in theory go toe to toe with a lightsabre and even defeat it by using the weapon’s reach and force.

The Sarzmigar is used in two main ways; one handed with a shield, or two handed by itself.
If used with a shield, the traditional Eldorai Taegis, it is usually used as a spear, to stab an enemy from behind the shield. In this case the Angelii operates much like a traditional spearman would, and often forms a phalanx with other like armed warriors for protection. This method is extremely strong defensively as it is difficult to breakthrough from the front, and it also gives the wielder good reach. On the downside the wielder is limited in tactical applications for the weapon.
If used two handed the Angelii uses the weapon as a halberd, using the blade to cut as well as stab, using the reach of the weapon to attack an opponent. This method allows for a skilled duellist to hold even a proficient lightsabre user at bay and fight them, but on the downside it offers no protection against projectile weapons.

Classification: Polearm
Size: One or two handed.
Length: 1.8 metres. 40cm of this is the head, with a further 10cm being a protected area of the shaft.
Weight: 2kg.
Other Features: Blade and top of the shaft are resistant to lightsabres. This area can deflect blasters if hit but has no accuracy in reflection.

So far this looks really good and well thought out. However, I am going to need a development thread. If you'd like, you can set it in the past during the original design/production of the weapon.

@[member="War Hydra"]
I will comply with a dev thread.