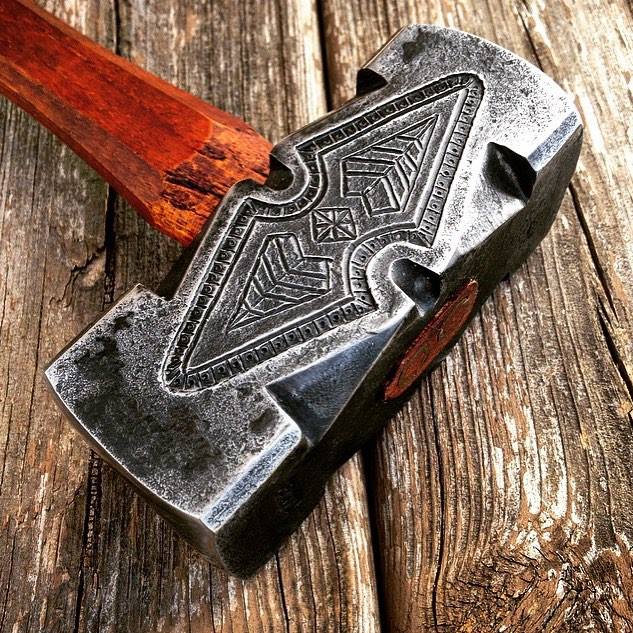 Entirely non-technological, these weapons manage to appear both ornate and primitive thanks to the material of their construction and are often underestimated by those who have yet to see one in action.

The main body of these hammers are constructed of dense cedar wood made from the slow growing Veshok trees of Mandalore and treated with a blaster resistant varnish made from the resin of the Ori'ramikad tree. This shaft of wood is cut in a hexagon pattern for added strength. The head of the hammer is constructed of Mandalorian Steel and carefully shaped to maximize striking power while minimizing impact stress upon the wielder.

The whole body of the weapon is imbued with the Manda in the way of the Jal Shey, greatly enhancing its durability and the force of blows made with the weapon. Most notable would be the weapon's ability to withstand blows from a lightsaber with no signs of being damaged. While the materials they are made of would typically make these sledge hammers quite lightweight, a side effect of the mystic imbuement is that the overall weight of the hammer is increased. However, the total weight of the weapon is still far lighter than a similarly constructed hammer would be if made from Beskar.

In addition to these general imbuements made to the material of the weapon itself, runic engravings have been carved along every side of the weapon's metal head. Based upon the principles of old Sith Runes, these Runes are written in the ancient Taung language and serve to call upon the Manda to produce specific effects. In the case of Kandosii Shukalar, this mystical effect manifests as the ability to shatter nearly any solid object the weapon impacts, using a variation of Shatterpoint known as Combustion.

Common metals and lesser materials are unable to withstand the punishment this weapon unleashes and will often shatter immediately upon impact (similarly to the shatterpoint effect). Stronger, more exotic materials (IE; Restricted materials) can withstand several (as appropriate for the story) hits from this weapon before suffering a noticeable effect, but shatter much more violently if they do eventually succumb (the Combustion effect).

Character Bio
[member="Mishka Larraq"]
There's only a few things I need edited so I can approve this submission, it's just a matter of making things less absolute so it doesn't imply forced damage for wording.

Just put "have the potential to" between "hits" and "shatter" here.

Throw "are more likely to" between "materials" and "shatter".

"Can" between "materials" and "endure", and "potentially" between "before" and "exploding"

Change "will" here to "can"

Overall the submission is fine, just this kind of absolute wording isn't allowed in the factory and codex.

Made the requested edits.

Mishka Larraq said:
and will shatter
Click to expand...

Just throw in a potentially in here, or a word to that effect.

And just change this to "if".

Otherwise it all looks good to go. Sorry for the hassle.