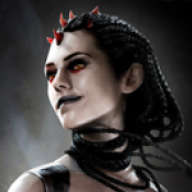 STRENGTHS AND WEAKNESSES (Required: 2 Weaknesses Minimum) :
+ Stealth, speed, and ability to hear and sense her quarry from a great distance away.
+ Knowledgeable in the use of spirit ichor

- She has no affinity towards healing spells, but uses Water of Life for such needs.
- While adept at one on one fighting; she is unable to maintain her strength when combating with multiple opponents over a long period of time. She is far more apt at quick in and out missions.

Revy Khai is a Dathomiran, a species the result of the hybridization between the human female witches and male Zabraks of Iridonia. She is part of a small percentage of the Nightsister society - as sect of witches who use dark magicks of the Spider Clan -- who managed to survive in the deepest recesses of the post apocalyptic wasteland that remains on the northern eastern regions of the planet Dathomir, a testament to the former razing of the planet centuries ago by way of the former High Priestess Santeria Decuir of the Nightsister Coven.


She is a hunter, a Shadow killer - an assassin that carries weapons that were silent and easy to conceal, such as daggers and darts that were dipped in poison. She normally wears a black wrap to help her blend into the dark, specializing in summoning a mist that could allow her to walk midway between the physical realm and that of the spirit realm.

She is knowledgeable enough to know the process and use of using of Spirit ichor and Magical ichor for invisibility and for healing. She is learning to master Sense of the Veshet, Ears of the Chiroptix, and Speed of the Toocha. She has a natural afinity to Scream of the Ssurian.