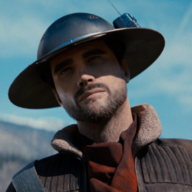 
STRENGTHS AND WEAKNESSES:
[+] Deadeye: Reuven is a crack shot, being able to shoot with anything from blaster pistols to blaster rifles.
[+] Survivalist: He has the ability to adapt to most environments, especially those in the wilderness.
[+] Justice: As a ranger, he has a strong sense of justice.

[-] People: Growing up isolated, Reuven isn’t exactly sociable - he can hold a conversation just fine, but doesn’t see long-term relationships as a worthy pursuit.
[-] Vengeance: Reuven can be somewhat harsh and brutal to those he deems unjust, which can lead him into trouble.
[-] Technology: Although Reuven has the requisite mechanical skill needed in order to operate basic machinery and to fix his ship if need be, more advanced technology isn’t something he can easily contend with.

APPEARANCE:
Reuven tries to keep a relatively low profile, so he doesn’t tend to wear anything extravagant or gaudy. He tends to pass himself off as any other spacer in the galaxy, just making his way through. A scruffy, weathered look perhaps would lead one to think that he’s a bit lower-class - a man who works with his hands. His helmet offers good protection, but also provides some anonymity.

BIOGRAPHY:
Reuven was born in the Outer Rim to farmer parents, the youngest of two siblings. While leading a rather uninteresting life for a majority of his youth, there would be the occasional threat from a local swoop gang or wildlife. As such, his father taught him how to shoot rifles while his older brother showed him how to quickdraw. Finding he had a natural talent for shooting, Reuven would often practice in the fields at the end of the work day.

A local swoop gang had started to raid nearby farms and make trouble in town, worrying the other farmers. One night, while in town, Reuven’s older brother was in the local tavern visiting friends when the gang entered, making a ruckus and harassing the patrons. Fed up, Reuven’s brother challenged the swoop gang leader to a gunfight. Stepping outside, the two men squared off from about twenty meters away. Reuven’s brother fell dead in the street, a burning hole in his chest.

In order to deter any more resistance, the swoop gang rode to the Starburn farm and burned it down, killing Reuven’s parents in the process. Barely managing to escape, Reuven hid in an abandoned mine for nearly a month recovering from burns and other injuries, with various townspeople secretly bringing him food and medical supplies.

When he felt strong enough to leave, Reuven went into town to face the swoop gang. He approached them as they stood in the street by their bikes. While first bemused that the young Starburn had even survived, much less was challenging the leader to a duel, the leader agreed, declaring that he would soon end the Starburn family for good. Both men squared up, and made their play.

The swoop leader hadn’t even cleared leather when Reuven’s blaster bolt pierced his chest. The gang was caught off-guard, shocked that their fearless leader had been felled by a teenager. As such, Reuven managed to shoot a few more before a gunfight broke out.

By the time the smoke and dust cleared, Reuven emerged, just barely the victor. Realizing there wasn’t much left for him on his home planet, he became a roving ranger, training in various places and picking up various skills across the galaxy. He seemed content to stay on the move, tracking down criminals and those who would do harm to those less fortunate. Perhaps he’d never save the galaxy, or face down an entire Imperial starfleet, but someone needed to look out for the common man.