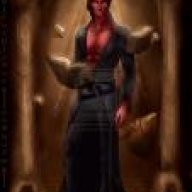 He stood, bent over a table in the heart of Dromund Kaas, capital planet of the sith empire. It was quite an odd event in the sith empire when one saw a sith researching what to do next instead of rather simply follow their raw, uninhibited emotions. Rarer still then that was the red skin of the original sith species being present in the halls of the capital. As far as he knew he was the only one left, still people seemed less concerned about what he was and rather interested in what he was capable of. As any dark side knight he was proficient in several types of lightsaber combat, similarly like others he had focused on one or two styles. He was also very adapt at his control of the force, more so than his skill with a lightsaber. It was the natural connection to the dark side given to him by his very birthright as sith, it was why he existed, why he continued to exist. Yet for are rare or common as force sensitives were in the universe, far less had the ability within them to channel the dark side into either magic or alchemy, both of which he possessed. Rarity often translated itself into value and sith alchemy and sorcery were valuable resources that the empire seemed to have forgotten as of late. There ahd been a time when sith warriors of old had donned armor made strong from alchemy and wielded swords that focused the dark side of the force itself. Such things had died out when lightsabers were invented. They had preferred the lighter lighsaber compared to the heavy sith swords, and when one was fast enough with a sword you didn't need armor. So alchemy had fallen by the wayside, only to be used every now and then by a rouge sorcerer or sorceress in their own goal. He sought to bring back the time where legions were equipped with the will of the dark side.

Records were laid upon the table. Several of them, the less detailed, were common information, star charts and standard historical documents. Several others bore the mark of higher clearance, granted to him by his status as a knight of the empire. Higher even than that was information reserved for masters of the sith and the emperor. Without little doubt the latter had been acquired without permission from the appropriate channels. To steal from the emperor was to invite death and was everything short of suicide. One might ask why he had done it, why he who had for so long sought to avoid the limelight of the empire, would do such a thing that would draw attention to himself. The answer was simple, he could not afford to not act. Yet if he was to act he could not do so alone, he needed help, and so he had called upon several other sith to help him. he could only hope they would come.

Nezuel​
Governor of None​
Master of None​
Slave no longer​
The Force shall free me
You must log in or register to reply here.