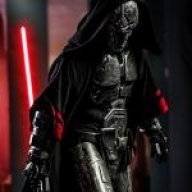 Strengths: top of his class in lightsaber combat. He is fluent and precise with every slash and jab he creates. He also is very resistant to manipulation by other force users due to his natural resistance to the force.
weaknesses: The force isn't very potent in him, so he can only perform the most basic abilities using it (pushing objects. lifting small objects, very weak lightning only capable of stunning enemies, etc.) He is also very emotionally unstable due to the loss of his wife. doesn't enjoy being told what to do.

appearance: is usually seen with an orange lightsaber in each hand. wears a white coat with the hood pulled up and his white mask on whenever he leaves his meditation area. under his mask he has a scar cutting diagonally right across his face. his eyes are dark green and his hair is long and black.

Biography: Raven lived with his parents on tython for most his life. his parents were both Jedi knights and where disappointed when their son had revealed his lack of the force. Raven was put down by his parents on a constant basis for his disability to wield the force. He was still initiated into the jedi as a padawan, and they taught him to tame what little the force he had to do small tasks. His mentors did eventually realize that he had an extreme resistance to force manipulation, and even jedi masters had a hard time getting into his head, and when they did they would get shot out almost instantly.
Raven was eventually taken off Tython and put into a class in which he had the full attention of one master. after he graduated from his new apprenticeship the council realized his mastery of the lightsaber. the council decided to send him on a mission with a few other knights to try and uncover a sith lord they believed was hiding out on Falucia. The jedi spent several years out of contact with the other masters of the council, doing work on falucia.
Raven then met the love of his life. Her name was Zereltha. The jedi had always told him that love was a tool that would destroy a man inside out, but the two lovers where drawn together more than anything. A year after meeting, the jedi married his Zereltha. The other Jedi knew about his destruction of the councils orders, but they couldn't bring it up with them, it would destroy 3 years worth of their work on Felucia.
The day finally came in which the jedi found their target. Darth Nalon was the dark lord they spent so many years trying to find. the four jedi went out to attack him head on, but they where too late. The dark lord killed all but Raven, who managed to escape. Dark Nalon was too smart to be defeated so easily. He found Zereltha before Raven could return to his home, killing her right in front of the old jedi.
Raven went into a rage, slaughtering the weak Darth Nalon. Raven was done with the jedi and the sith, he left it all behind, leaving the rest of his life to fate.

(I am going to start this character off as a padawan, I just have a plan for what's going to happen afterward.)

rps: none
You must log in or register to reply here.