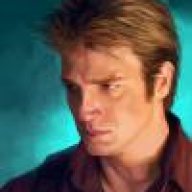 STRENGTHS:
Pilot - As per most Corellians, Quintin is an excellent pilot.

Marksman - Though he had no formal training, Quinton began smuggling and fighting at a young age. Being young and small, he often acted as a scout and sniper. Because of this, he quickly became an excellent shot.

Survivalist - Being a smuggler, Quinton isn't always in the best of situations. Often fighting, or running, for his life, he has always found a way to adapt and overcome, toughing out rough conditions and brutal fights, to survive for another day.

WEAKNESSES:
Hot Headed: Corellian through and through, Quinton often let's his feelings get the better of him, and more than once it has landed him in some tough spots.

Reckless - More often than he should, Quinton charges into battle without a plan, guns blazing.

Criminal Life - Raised by smugglers and pirates, Quinton has a long list of enemies and law enforcement agencies looking to take him down.