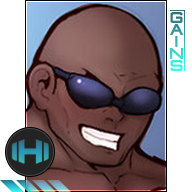 Since he began his training as a Jedi, Aten has been the apprenticed to individuals that preferred saber combat over other forms yet he himself had developed a taste for hand to hand combat. In the youth's mind, it was better to use his hands first and give his foes time to see the error of their ways or knock them unconscious instead of using a saber and possibly killing or dismembering them. Yet in a galaxy where so many individuals are decked out in armor of all types, he needed a way where his strikes would penetrate those in heavier and more resilient armors while also providing protection against those wielding lightsabers. Thus, the creation of the powergaunts, at first the young Jedi contemplated utilizing repulsor technology but couldn’t deduce a way for them to be particularly effective against those in heavy armor except releasing a large burst of energy but then that risked putting distance between him and his foes. Putting the more offensive capabilities off at first he focused on defense, thus if he was to be engaging using plasma weaponry he needed something that once in close would allow him to keep his arms. Thus he used a material that had grown incredibly popular, Phrik. With this material he'd be able to deflect blows from lightsabers or blasters, and even catch sabers if need be. Extending the gauntlets down his forearm and even adding an elbow guard Aten was satisfied in his work and set to the mechanical and offensive components.

Eventually, after much research Aten came across more archaic forms of technology that were far more dangerous and potentially lethal but with his technological ingenuity and the potential, he could not resist. As such he began the process of dissecting and understanding the full capabilities of vibration generators and sonic emitter. There were many tools in the galaxy that utilize similar technology such as power hammers which made the construction of the powergaunts far easier. Having installed micro sonic emitters and a vibration generator into the gauntlets Aten ensured that on impact the gauntlets would release a wave of sonic energy and vibrations. On the lowest setting, the vibrations and sonic waves would simply penetrate an individual’s armor having two effects with the sonic waves possibly disorienting those it strikes and the vibrations amplifying the force of the blow three times over. The average setting has a similar effect to the low, except the vibrations and sonic waves emitted come out with the force of a Wookie sending one reeling or shattering bones, this is mainly used in case of emergencies to put space between Aten and an individual if he needs some breathing room. The highest setting which is something that Aten reserves for mainly Sithspawn or creatures he can’t risk being gentle with completely throws aside the safety restraints and falls back on the original purpose of vibration generators which was to rend flesh, shatter bone and penetrate armor. Along with the sonic emissions, it is potentially enough to send an individual flying and penetrate the hardened carapaces of whatever hellish creatures that Aten uses it on.

However, such a creation has many downsides, for example, those who sport armor that is incredibly resistant to sonic technology wouldn’t even be affected by the sonic waves the weapon emit. Without knowledge of how many chemical weapons are being used Aten didn’t contemplate making an addition to the gauntlets that protect him from such things and acid could easily eat through them turning them and the hands within to mush. Even attempting to block a slugthrower round or other physical projectile with these gauntlets would be near damning for Aten as while they may not penetrate the armor his arms would be destroyed. Something else he hadn’t contemplated was the damage the weapon could potentially do to himself on its average and high settings, that being the sonic waves disorienting him or having a more potentially devastating effect. The vibrations are an entirely other beast that need to be dealt with as on the average and high settings if used too often they could completely numb Aten's arms making him near useless in Hand to Hand combat.

Really neat concept, nicely balanced as well. I only have one question / comment.

You note that the sonic waves would effect Aten as well, but what about the vibrations? Traditionally the vibrogenerators were used on weapons, and the vibration happened far away from the users' hands; here you have it jostling his bones directly, and apparently with enough force to compare his strikes to a Wookiee.

How does this impact Aten?

Thank you for pointing that out as I was trying to think of how it would affect Aten if he used the higher settings. I'd assume that there would be a need for vibration dampeners namely due to the risk of him completely destroying his arms? So perhaps dampeners that nullify the vibrations on the lower and average setting making it more just like when you hold a jackhammer? While at the high one possibly numbing his arms for a bit afterwards? I'm also open to any suggestions for it.

I would perhaps use it to limit how often Aten could use the generator to enhance the strength of his strikes.

For example, if he did it too many times in quick succession, then his arms would grow numb, thus reducing his skill and agility in hand-to-hand combat.

Character Bio
[member="Netherworld"] Thank you for the suggestion, I edited it in.

Awesome, thanks for the cooperation. Have fun!