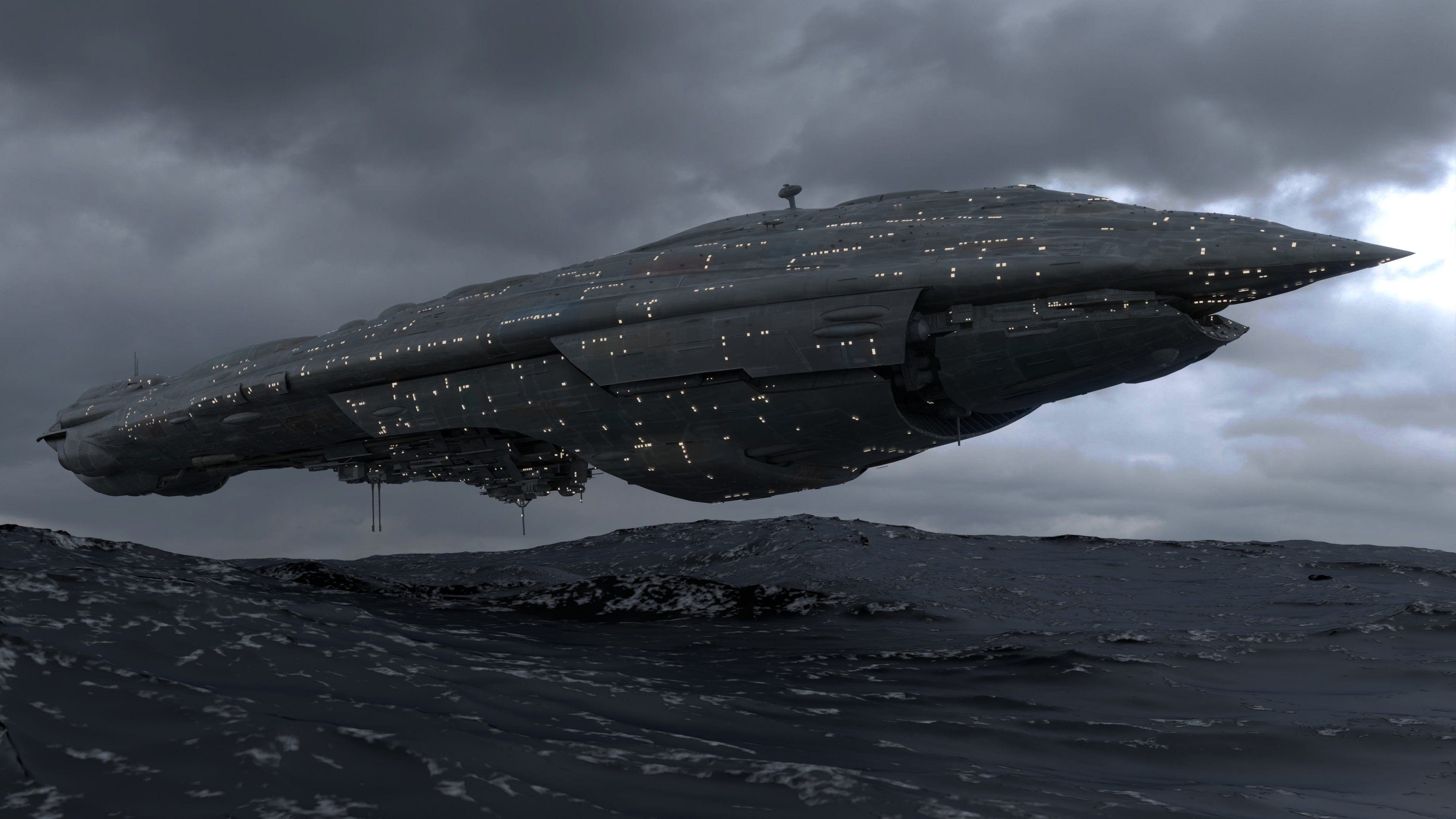 Description: The Pelagic is a long-range attack vessel which uses extensive banks of ordinance to bombard enemies from a distance, much like the older MC30 and Broadside Missile Cruiser. But in many ways, the Pelagic is more akin to the legendary Victory Mark I Star Destroyer, also noted for its high number of missile launchers. Like that small destroyer, the Pelagic excels in atmospheric operations, where it can use its large numbers of warheads to devastate enemy fortifications and troops before landing its own complement of ground troops. While Pelagic can operate as independent warships, in larger fleets they often as act as an anchor, using their high firepower to batter down enemy ships from a distance or providing covering fire for the movement of friendly starships.


Technical Descriptions​
Crew & Automation: The Pelagic Star Cruiser actually falls back from Lucerne Labs trend of high automation. While the ship retains a network of Calor Bio-computers and Biolux Organoform Circuitry that can allow the ship to automate some basic day to day functions and as emergency back-ups for critical systems, most crew tations rely on traditional manpower to operate. It is not uncommon though for many Pelagics to have large number of droid crewmen.

Communications: The Pelagic uses a single Oracle-class Communications Packages supplemented by several dozen comm lasers and a Biocomm. This provides the ship with a fairly typical communication's suite for a ship its size.

Hull: The Pelagic has an usual ovoid hull design that is clearly demonstrates its Mon Calamari origins. In terms of physical construction, however, it shares more in common with some of Lucerne Labs more recent designs. Materially, this frame is constructed of ferrocarbon mol-welded with duravlex to make an exceptionally durable frame to physical impact and high temperatures. This primary frame is then covered in secondary armor belt of link-steel laminated with plasteel to provide some flex in absorbing and dispersing physical impacts. This secondary belt also acts as a rudimentary farraday cage to help protect the vessel from electromagnetic radiation, whether naturally occurring or as part of an enemy attack. This armor belt is then in covered in a primary belt of Argentum Matrix Armor, which is designed to better mitigate the effects of heavier weapons that can pierce through the ship's low-powered shields. Some vital sections of the ship, such the bridge and engineering sections, are shielded with Agrinicrete to provide protection against unusually strong radiation that may get past the ship's shields and hull.

Hyperdrive: The Pelagic is equipped with a x1.5 hyperdrive, giving it relatively average performance for its size. With the prevalence of interdictor technology, this hyperdrive has been hooked up to multiple hyperspace coils to form a HIMS device, allowing it to better penetrate extensive interdiction efforts.

Security: The Pelagic incorporates conventional Lucerne Labs internal security systems, making extensive use of code cylinders and droid-specific passcodes to control sensitive access to the ship and its systems. Tripping or attempting to force one's way into the system can not only trigger silent alarms that inform the ship's security complement, but also trigger any number of automated traps. Forced access to most restricted rooms triggers man traps concealed underneath the deck's plate in an attempt to immobilize the intruder. Key rooms, corridors, and junction points are further guarded by Class VI automated laser projectors and force-field generators. In terms of electronic protection, the ship utilizes typical pyrowalls and Rapid Repetition Defense Measure programming supervised by a dedicated team of a dozen EI-9 network security droids spread throughout the ship.

Shields: The Pelagic is equipped with an Aspis Shield System which provides the ship with average shield protection for a ship its size. Because of its role as a missile cruiser, special programming routines are automatically installed into the shield generator's programming, allowing the particle shielding of the ships to automatically and briefly drop while the ship launches ordinance.

Sublight Drives: The Pelagic sports fairly typical ion engines for a ship its size, giving it average speed for a ship its size. These sublight drives are augmented by a Gulfstream Maneuvering System, which is often used when Pelagics occupy rear positions within a fleet, allowing them to better aim their warheads at long range targets.

Armament: Pelagic-class Star Cruisers are colloquially known as “missile cruisers” for good reason, with almost all of their main armaments being focused on launching different types of missiles and other ordinance. Rather than having primary guns, the Pelagic has an octet of very heavy ordinance launch bays designed to launch strategic munitions the size of small starfighters. Common payloads for theses bays for planetary bombardment include DOKAWs,and Magnepulse bombs, while common payloads for superiority missions include boarding torpedoes, baradium missiles, and targeting probes. However, as the bays simply consist of a racks along with a small pressor beam to launch the ordinance, they can be adapted to launch a variety of ordinance. While these launch bays provide the heaviest individual ordinance of the ship, a greater portion of the ship's firepower is actually found in its general purpose warhead launchers, which allow it to fire a variety of smaller ordinance at a faster rate of fire, and in its plasma energy torepedo launchers, which provide it with a variety of damage types with exceptional range. Tertiary firepower is provided by Rhongomyniad mass driver cannons organized in four gun batteries. While they can and are used to launch solid slugs and cannister shots, these guns are typically loaded with starfighter-grade missiles in sabots. This allows the Pelagic to projectile suitable firepower for dealing with enemy starfighters at a greater distance. The last of the Pelagic's capital ship armament includes twenty minelayers, typically used to deploy munitions to discourage pursuit or in preparation for holding positions against enemy forces. While Pelagics often rely on the massed fire of their mass driver cannon batteries to deter enemy strikecraft attacks, the starship also carries a number of flak cannons and quad autoblaster emplacements to more precisely deal with small threats such as incoming ordinance and starfighters.

Carrying Capacity: The Pelagic only carries a single squadron of starfighters in a small, ventral hangar, as well as a handful of non-combat support craft. This starfighter squadron is typically composed of interceptors, which are used typically to screen and bolster the ship's point defenses. However, it's not unheard of for Pelagics being assigned different craft, especially for specialty missions like planetary assaults. In terms of carried troops, the Pelagic carries three battalions, making it largely equivalent to its inspirations, the Victory I Star Destroyer.

Sensors: The Pelagic's primary sensor array is a Metis-class, which provides it with a reasonable ability to detect and target enemy ships even while being jammed. The Pelagic also has a secondary sensor array based on Admiral Quee's experience as the project lead for the Republic's old Steadfast-class Star Cruiser. Like that ship, the Pelagic has several Dedicated Energy Receptors manned by technicians who can use them to scan for weak points in enemy shields like a Torpedo Sphere. Once this weak point is found, the ship's crew can program this target into missile's guidance computers or into weapons batteries targeting computers, allowing the ship to conduct, massive, converging attacks designed to penetrate through local shielding and other defenses into the target itself. However, this method of attack is typically only effective against large or slow moving targets (typically heavy cruisers and above), as smaller ships typically move to quickly for the batteries to effectively converge on a target. This method of attack is more typically used when assaulting defensive space stations from range.