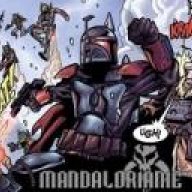 Intent: "Due to Squr's large muscle mass and frame, his armor needs to be an expanded version of the current Mandalorian type, and it also is being created to honor his families legacy with a specialization for hunting and capturing prey as a bounty hunter."
Development Thread: yep
Manufacturer: mandalmotors
Model: Aaray beskar'gam
Affiliation: mandolorians
Modularity: no
Production: Unique
Material: beskar
Description: Squr upon earning the title of mandolorian needed armor to complete one of his tenants. Along his journey he had acquired artifact's along the way like the sentient artifact that can generate hyper-matter and such. The special request and idea is to make the piece of armor powered by hyper-matter like a ship is along with a converter that could connect to his wrist blaster , flamethrower, His heat signature mode on his helmet , his jet-pack , and life support system's. This would allow him to have constant power for a long period of time. He would not have to worry about running out of ammo , in his wrist blaster or flamethrower, this armor also contains his napalm rocket that connect's to his heat signature hud allowing him to target enemies specific heat signature for the rocket's target.

The armor also has built in brass knuckles encase he need's to use his immense strength to crush someone. The armor also has a compartment right beside his jet-pack to store his sith chainsaw, that he had gotten from the final battle of the horrific undead plague. this heavy beskar plated piece of armor is so thick layered that compared to most other pieces of armor it can take immense blaster fire and hit's from a melee weapon such as a light saber. But because of this capability it makes the user or squr slower then most on the battlefield , another unfortunate weakness to all these strength's, are the leg and hip joint's ... these joint's are complete game for any weapon ... if the enemy find's out . Also because the artifact is sentient so is the piece of armor . For if an enemy were to steal the piece of armor it would completely shut down and not work. Not only this but it gives squr a ally to talk to while he's in the middle of a battle. The suite will always have constant power for a week because of the hypermatter converting for all the weapons and devices. once the power is run out a 24 hour cool-down will be needed to ensure the hyper-matter is safely regenerated.

Process would work like : Hypermatter is based on fusion system's meaning it could be converted into fuel for jet-pack's , flame-throw's and stuff because of it's heavy amount of plasma in it. This could also work with oxygen because plasma converted into fire has oxygen. therefore extracting the fire energy into oxygen therefore giving squr , unlimited fuel for his flamethrower and jetpack, but also unlimited oxygen when on space mission's. This also gives his wrist blaster unlimited ammo to because plasma is used to charge blaster bolt's and such. To also add onto this is the fact that with this energy converter in the armor hypermatter could also from the fusion side of it be converted into fusion electricity for his helmet's hud and comm. This gives squr a constantly powered suit of armor but because of these functions heavy amount of beskar would be needed to make this piece of armor so these power sources could not be interrupted. Also after the power is used up a cool down is needed so the hypermatter may safely be regenerated .

+ unlimited power supply for long periods of time
+ multiple built in weapons powered by the sentient artifact
+ Heavy piece of armor capable of taking many hit's
- the hip and leg joint's are completely open for anyone who finds out
- makes user slow
- needs a cool-down once energy is used up before being regenerated again. if a battle last's longer then a week squr would be have to really on his normal sight, and slow movement without his jet-pack this allow's the enemy to counter attack

Classification: multipurpose
Weight: 40 kilos ( just cause it's very heavy to accommodate for allowing me to be slow)
Quality:9.5
Other Feature(s): sentient

What it looks like mostly : Would be more larger and include the accessories i have for this armor Character Bio
@[member="Squr Tyson"] Hey bro, as a former RPJ. I can assure you we do read the subs fully. I know you mean well, and you're doing a good job of being nice and patient. We aren't going to ban anyone for anything around here, especially not a factory sub. The Judges will work with you, and get your sub approved okay? I'm going to edit out the last bit of your title and an RPJ will be with this sub soon.

Hey! ...'Hooo boy. This is a doozy. The outcome of my decision isn't going to please you, but just bear with it. I can't in good faith process this through, because this is going to require so many significant changes, it's not at all going to resemble what you wished for originally. Unlimited power supply, in built weapons, 'sentience', and little to no evidence of a Dev Thread? Under current rules, I have to let this one go. I'm very sorry.