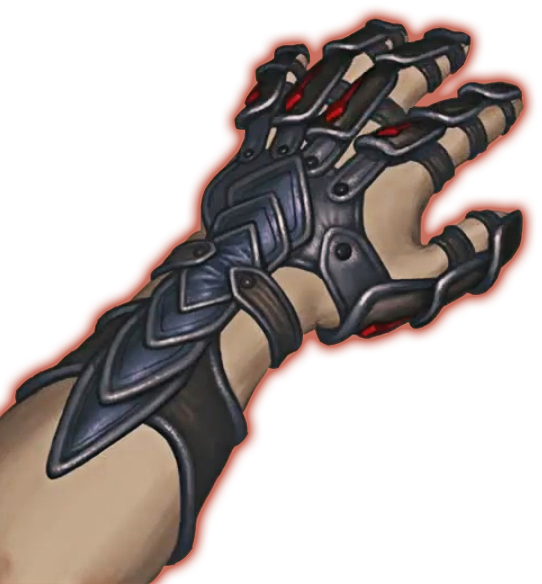 Thanks to Orcsmustdie wikia for the image.

Intent: To provide Xavier a weapon to combat saber duelists
Development Thread: Here
Manufacturer: J.A.C
Model: Osiris' Fists
Affiliation: Xavier Varanin/Czar Warriors
Modularity: N/A
Production: Minor
Material:
-Plates: Neuranium
-Crystal: Seoularian Crystal
Description:
Crafted from Neuranium, the gauntlet is severely heavy compared to the average and that is why during initial design plans notes can be found explicitly stating basic covering was required - nothing more. Enough to knock sabers away during combat, as well as grip them for a moment if absolutely necessary, the latter leaving severe burns of course along all flesh that was left exposed. Though it is lightsaber resistant, the ability to be burned is far higher then otherwise.

Bore into the metal against his knuckles lay Seoularian Cystals, designed with the intent to give "Sonic Wave Punch"s. Initial tests were disparaging, but after multiple beta examples he was able to finally create a singular effect. After a 20 minute wait, the Crystals would gather enough energy that upon a severe contact (a powerful punch) they will add a shockwave. Basically it adds a small Force Blast to the punch.

Character Bio
The development thread is not substantial enough, the description is lacking, the crystal used is rendered redundant in the SWRP setting.

Denied. You may second chance this if you feel it was wrongly judged.