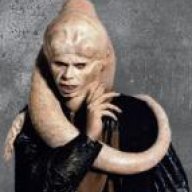 NAME: Orn’komad
FACTION: None
RANK: Smuggler
SPECIES: Twi’lek
AGE: 26
SEX: Male
HEIGHT: 2.1 m
WEIGHT: 58 kg
EYES: Green
HAIR: None
SKIN: Fair
LANGUAGES: Basic, Twi'leki, Huttese, Lekku (impaired)
FORCE SENSITIVE: No
---------------------------------------------------------------------------------------------------------------------------------
STRENGTHS AND WEAKNESSES (Required: 2 Weaknesses Minimum) :
(+) Fast Talker: Though physically scrawny, Orn'komad's childhood on Nar Shadda forced him to develop survival skills, among them the ability to bluff his way out of almost any situation.
(+) Face Reader: Orn'komad's past also gave him the ability to read people's faces. He can almost always tell if someone is lying, and can usually see their attitude and reaction even if they try to hide it.
(+) Actor: Even as he can read other's emotions, Orn'komad is adept at hiding his own. He can assume any facial expression and can convincingly portray emotions that he does not feel.
(+) Quick Draw: When words don't work, Orn'komad can draw his blaster faster than lightning.
(+) Forgery: He's not a master, but give him a day or so and he'll whip you up a false identity that'll probably hold your cover longer than you will. Probably.
(+-) Untrusting: Orn'komad rarely trusts people. While this has saved his life on several occasions, it also makes him somewhat paranoid and he hates working with others - like as not, they'll fall through. Perhaps the most dangerous aspect of this is that oftentimes, others don't realize that the trust isn't there, as he is brilliant at concealing it (see above).
(-) Injured Lek: Six inches of Orn'komad's left lek are missing. The scarred area is extremely sensitive to touch, to the point that he is effectively helpless if it is grabbed. It also makes it much harder to "speak" lekku. In addition, Twi'lek lekku hold part of their brains. Though the wound did not cause brain damage, occasionally he will suffer debilitating headaches. The pain medication caused:
(-) Addicted: Orn'komad is addicted to spice. It started with his pain medication, but has snowballed into a full-on addiction.

APPEARANCE:
Orn’komad is a moderately tall but thin-looking Twi'lek with tan skin that looks much like a human's. His dazzlingly green eyes are disarming in their apparent sincerity. Most conspicuous about him, however, is the fact that he is missing part of his left head-tail. The six inches missing from the lek cause serious problems for him, but he doesn't hide it.
If he's on his ship or if given the option, he will wear a brown shirt and slacks. If he's expecting trouble - which is most of the time - he will throw over that a black leather jacket with his concealed DL-22. Otherwise, he has clothing for every occasion.

BIOGRAPHY:
Orn'komad was born to an information broker and his wife on Nar Shadda. He grew up mainly on the streets - there wasn't much of a choice in the neighborhoods he spent his time in. It was during this period that he developed many of his most useful skills, using his tongue to get himself out of trouble as much as he used it to get in it. At this point, he also started carrying a butterfly vibroknife; though it was often drawn, it was seldom used.
During his childhood and teen years, Orn'komad moved often. Anyone with a job like his father's quickly earned the ire of Hutts and crime lords alike, and the family rarely stayed in the same place more than a few months at a time. Fortunately, his father had the protection of a powerful Hutt, so there were never any serious losses.
As soon as he was eligible, Orn'komad got a job at the local spaceport. Though he wasn't a great mechanic, he chatted up the pilots who came through, and earned the trust of some of the regulars. He leaned how to fly a ship, and became intimately familiar with their maintenance.
At the age of twenty two, he got the break he was looking for. One of the regulars, a smuggler who'd been plying the trade for decades, decided to settle down on Nar Shadda. Orn'komad immediately took out a loan and bought his ship off him. After making a few repairs (the old man had quit for a reason), he headed home to say his final goodbyes before blasting off to see the galaxy.
His mother was less than pleased, but his father couldn't have been more proud. As a show of support and as a parting gift, he gave Orn'komad his blaster. He had taken it with him every day, and the only time Orn'komad had seen it off his belt was when he was firing it. He accepted, and valued the weapon over his new ship. His sister, Koyiko'mad, begged to go with him, but he refused, saying she was too young.
His father set him up with a Hutt, giving him a job running spice across the galaxy. For three years, he ran jobs, collected his payment, and slowly paid off the loan shark. The ship hadn't been cheap, but to Orn'komad it had been worth every credit. Once, when returning to Nar Shadda after a run, he stopped by to see his family. They were well - his father had retired shortly after he had left, so they had finally been able to settle down. Koyiko begged to join him again, and this time, with pressure from their parents, he agreed.
Their first run together was fairly simple - run to Ryloth, pick up aload of spice, and ship it to Corellia. The security there was generally better than average, but that particular day they were heightened. Orn'komad didn't worry too much - he'd gotten through tighter spots than that.
He would have made it of not for Koyiko. She hadn't nearly his skills of bluffing or fast talk, and the officials caught on that something was up almost immediately.
They were caught. The two of them were imprisoned and the ship impounded. Two months, a whole mess of red tape and a few hefty bribes later, they were free again, but Orn'komad had missed payments. Without thinking, he immediately took her home, refusing to allow her to get them captured again. Unfortunately, the loan shark caught wind of his coming, and there were three goons waiting at the spaceport. He managed to convince them to let Koyiko go, and very nearly escaped himself, but they caught him and exacted their toll. They left him short six inches of his left lek and bruised ask over. The only reason he didn't suffer more permanent damage was because he still had friends in the spaceport, dragging the thugs off him and getting him medical attention.
His recovery took almost a year, but the loan shark had called them even, so it passed uneventfully. By the time he was ready to fly again, the Hutt he had worked for disowned him. He found a different crime lord to run for, and stayed with him for almost a year before he was killed in a gang war. Now, he's looking for a new employer - or, at least, someone who can pay him enough to feed his spice habit.

This is a really awesome Twi'lek. I approve SO hard. Welcome!