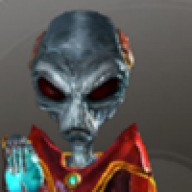 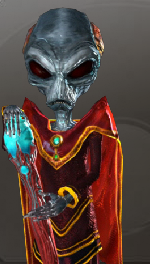 Genius intellect: Like all Columi, his brain is dramatically enhanced through genetic modifications. He is a genius, particularly adept in history, tactics, medicine, and weapon design. He finds droids fascinating, but never had a real knack for designing them.

Fast Learner: Olom can figure out a new language after about five days of hearing it. He once rebuilt a starfighter that had crashed on a moon nearby in a week. Give him technology and ideas, and he will put both to use.

Nimble little bugger: Using the force to augment his body and propel himself, he is a graceful and lithe opponent. He is not dependent on repuslor-lift gear to move like others of his race, having found his skill in the force an alternative.

Born Leader: Olom is cunning and manipulative. Although he is often gruff and callous, his intellectual mannerisms and painful skill at drama lead people to trust that he knows what he is doing, even if it is not the case. As he puts it, "Being a genius is useful, everyone knowing you're a genius is power all its own."

I can see you: The eyes of a Columi are designed to adequately perceive in a wide range of spectrums, many not visible to humans.

Force user: Olom is a force-wielder.

Rag doll: Although agile and smart, he has virtually no muscle mass, causing him to be a rather worthless lightsaber duelist. His lack of any real weight, combined with his fragile body, force him to avid combat, as he really can't take a hit.

Impudent FOOLS!!!!: His ego and his intellect often combine to make him a rather theatrical man, even by Sith standards.

What do you mean, methane?: Columi have no sense of smell or taste, and are fairly easy to poison because of this. Olom keeps a "cyber-nose" to chemically analyze his food with him, as he can't tell on his own if food is spoiled or otherwise inedible.

I'd rip your heart out if I had a ladder: his height and nearly worthless limbs force him to stick to telekinesis for doing most things. He has a hard time showing discretion about having force powers, as they are the only reason he can survive without droids feeding, dressing, and walking for him.


Who you calling weak: Due to his soft, almost childlike voice and less-than-imposing figure, most people fail to recognize him as a powerful Sith. This is both a strength and a weakness, as it can be hard for him to intimidate his opponents like other sith. That being said, he pulls off the simpering weakling routine long enough to disarm some idiots.


Okay, I'm a little obsessed: Olom is highly focused, and if he finds a problem he can't solve, he'll obsess over it even more.


Hated at home: Due to his "mutation" of force-sensitivity and his willingness to do physical things like walking and crawling, he is viewed as a "primitive devolution" by his own family.


Telekinesis--novice
Force Valor--Novice, he uses it to allow himself to walk and bounce around for brief amounts of time.
Mind trick--Novice, albeit a handy way to pump up his already prodigious skill and manipulating people.

Dun Möch: Olom would much rather drive his opponent to madness then actually fight them. After all, a loyal minion turned to the Dark side beats a dead body anyday.


Form Zero: Arguably one of the rare Sith to actually appreciate the philosophy of negotiation over conflict, Olom is more likely to threaten violence than start it.


Shii-cho: Olom's preferred style. While not a masterful duelist by any means, he finds the simplistic and balanced methods the best ones on the rare occasion he is actually pushed to combat.

During his stay on Dagobah, he integrated his lightsaber into a benign-looking, if somewhat 'rural' saber-cane with a small manipulator for pulling switches on one end of it. It is handy for reaching things without using the force, and it keeps his weapon stealthily hidden a majority of the time.

He often rides around on a small Columi mental hoverpod when in formal sith settings, such as meetings and the like. This allows him to stay eye-level with others.


Olom was a rare mutation among the clones of Columi, as he had been found with force sensitivity. His willingness to use the force to move around without technological aid was seen by many as heresy. This, coupled with his occasionally irrational bouts of emotional behavior, led him to leave the rigid, rational world of Columus, where he was often sold as a slave, his mixture of force sensitivity and superior intellect allowing him to work as an advisor for many shady people until he found himself in the Sith Empire. Due to his force sensitivity, he has been allowed to be freed from slavery in exchange for providing his services to the Empire.


While working loyally to the Empire, he served Emperor Ardik and Later Emperor Lussk with loyalty to his true master, Kaine Othorius. His training with Tricia Kalamak was....brief at best, but he found her knowledge helpful and her curiosity inspiring.

As the empire began to collapse upon its own pride and arrogance, Olom took the calculated risk of stealing the pensions of several soon-to-be-deceased officers, and moving to Dagobah--a world controlled by the Fringe, but not typically watched by it.

His seclusion on Dagobah was maintained during to opening of various portals to the Hell that seemed to lie beneath the universe, although he did manage to take a few notes here and there. He has since taken a small interest in the activities of the self-proclaimed "One Sith," probing the Emperor's reserves of knowledge and miltary infrastructure delicately, and watching the Fringe as well, biding his time, waiting for a truly opportune moment to begin his own work upon the galaxy.

BOUNTIES COLLECTED:
Isn't that the work of someone a little.....burlier? i suppose I could set a trap, hmmm.....

Character Bio
Good to be on board.

Cool character. I like that uses Valor to move, makes him less of the norm.

Character Bio
Felt it made sense, coming from a race of quadriplegic super-brains.