Character Bio
The sky was dark with the heaviness of clouds, the beauty and color of the land now seemed blank and grey. The lush green land below complete with open glass plains and valleys where Empty of life and happiness. A loud clash boomed in the sky and the wind wrestled the earth into submission.

Standing in the middle of this hectic weather was a young teenager. Reminiscing in the memories of his recent past. Standing in front of the jedi temple on his old home 13 cobalt eyes scanned the temple grounds. It had been many months since he left the order…honestly there where very few he missed and he was sure even fewer missed him. The temple was probably the main cause of his loss of emotions…a blank face stared forward and eyes of blue seemed dead to many. The boys hands remained in his pockets as rain began to fall hard. 13 continued to stand there without really thinking about anything else. He wore a black jacket with a fur laced color and cargo pants with military boots. His white hair began to stick to his face and cover his eyes as he stood there as if he were lost. And maybe he was…maybe he was. 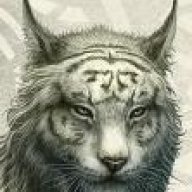 Character Bio
Naadi had recently creates a shamisen-sort of banjo-thing out of some sort of hat-box she had found, a slat, and some wire fibercord, along with little bits and pieces here and there.

She was crouching on a stone block on the Grand Stairway, just under a pillar's overhang, where she was mostly protected from the downpour, and began randomly picking at the banjo-thing with her retractable kitty claws. The trianni girl soon began playing a happy little melody on the 4-stringed instrument, in spite of the dreary rain.
http://www.youtube.com/watch?v=Z1fTbDJiyrM

Naadi detested rain, which was ironic because she liked to go swimming, in either hot or cold pools (but not too hot or cold, mind you). Off in the distance, she saw a white-haired boy who looked lost as lost could get. Naadi idly wondered whatever did happen to that weird boy she had met, the one with the number for a name, 13, and pair of tails. She wasn't sure what had happened to him, but it must have been dreadfully important if he had to leave without atleast sending her a comm-link message.

The lost boy reminded her of 13, and good times. Especially when she was teaching him how to be more 'normal'. Naadi liked 13, he was cute in an offbeat sort of way, and they had alot in common.

Character Bio
13 blinked when a strange kind of music came from aside him. Still looking ahead 13 felt his eye twitch as he began to remember the music that he was hearing. His mind walked away as the music flowed. His gaze came to someone underneath something to get out of the rain and 13 continued to look forward. Unsure if he was willing to turn around and see if it was who he thought it was. He had not seen her since he had been knighted by the order at the age of ten…for some reason when he left the order and took her friendship nature with him. Slanting his eyes to the side he saw his thoughts where confirmed. Naadi. He remembered when she became probably his only friend from the order...and the only one he cared about. He often wondered if she felt the same way about him. Turning his body slightly his ears swiveled atop his head and his twin tails swayed behind him. Was a long time.

Character Bio
Naadi was still playing, when the wet stranger turned to look at her, and she saw his tails sway....

Wait - ....Tails-plural ?..... !! She thought to herself. She stopped playing right quick, leaning forward and her ears parked so far forward that they kept the rain from hitting her face. "Thirteen !?" she called out. Hoping that it was him, and not the rain playing tricks on her eyes (or heart, for that matter?).

Seeing that it WAS him, she scampered down the steps pel-mel, with the banjo-thing left on the stone block, stopped an inch short of bowling him over - and hugged him, purring and ignoring the rain for now....

Character Bio
13 narrowed his eyes slowly when the felines eyes turned to face him. Not a few moments passed before she suddenly called out his name and his expression tightened slightly. He watched as she scampered down the stairs and ran over to him and he remained still and emotionless. Did she...was she...surprised to see him? He tilted his head when she stopped short of him and wrapped her arms around him as if to show affection. His eyes and face remained blank as he lifted his arms and hugged her back. Though it held no meaning to him...not anymore. He had lost his emotions...he couldent feel anything anymore. But for some reason...in his mind. He remembered the feelings she gave him. And that was saying something.
You must log in or register to reply here.
Share:
Share
Menu
Log in
Register
Install the app
Top