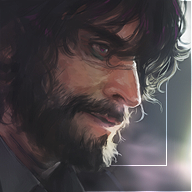 Character Bio
"Cut a portal between worlds. Stride the Lightning."


Kindly. Inquisitive. At peace with himself and the universe. Oceiros is very much content to go with the flow, wherever it might lead him, whatever jobs it lands him into. Worrying is for other people. Being in a hurry or displaying any form of urgency is also for other people.​
​
Oceiros rarely complains, rarely outwardly expresses displeasure of any kind. He's not concerned with money or material things. It all comes and goes. At the end of the day, it'll be just fine, see?​
​
What Oceiros wants out of life is to travel far and wide, to drink deeply of the rich experiences this galaxy has to offer. And to talk to interesting people. Oh, does he love to talk.​
STRENGTHS & WEAKNESSES


Oceiros of Shor fights first with his fists. He is a skilled practitioner of the traditional martial arts of the Shorak people, which he has blended with the more renown Teräs Käsi. Oceiros likewise carries the Armiger Suite and the benefits it imparts.​
​
If the going gets tough, he will employ a lightsaber. It has a standard hilt, silver finish, and a purple blade. Shorak glyphs are etched along the side of it, which translates roughly to "ESPECIALLY SHARP ROCK." He's not especially good with it, using a very conservative variant of Medium Style.​
​
If all else fails, he also carries an NK01 Fujita Rail Pistol. Usually. Unless he wants to bring something else.​
FORCE ABILITIES

​
Among some of the shorak, there exists the concept of the throne. To find one's throne is to be at the height of one's mastery, at peace with oneself and the universe, to traverse the current of life with pure equanimity, to be utterly divorced from earthly wants. You know, the good stuff.​
​
But here's the thing: you cannot find your throne by sitting in your house. It is not under your bed, between the cushions of your couch, or tangled in the wires under your desk. You have to find your throne by taking the long walk. You travel very, very far, very, very wide, and for a very, very long time. There are no other ways.​
​
So it is that there are many shorak who give up (most of) their earthly possessions and leave their balmy little world in search for their thrones. Oceiros is one such shorak. He follows the wind and his whims. And maybe the wind ended up giving him a job he shouldn't have for a group of people he shouldn't be around.​
​
But who's he to argue with the wind, right?​