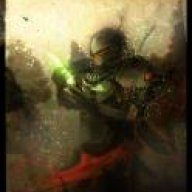 The natural ability run at high speeds for long periods without getting tired, alternately using two or four legs. As expected for a species of hunters, they had a keen sense of hearing, keen sense of smell, and excellent night vision. (Racial)
Tech'ed, decked, and armed to the teeth at all times. Nova's suit is a rather advanced power armor. Relaying tactical information to the hud visor for better situational awareness, increasing her races already impressive strength. The suit is space worthy thus will protect her from most environmental dangers. Fancy gadgets like a grappling hook, magnetic boots, taser, and dual flame throwers are all there. And of course its an armor, it serves that purpose very well. Pocket space, lots of pockets.

Restrained force is not in her dictionary. If it can, it probably will explode. If someone needs to be 'ruffed up', expect broken bones and some kidney damage. She's just the kind that doesn't hold back. This is problematic when you don't want half of everywhere leveled to an even scorched surface that can't sustain life.
Being a bounty hunter hey loyalty may swing to the credits unless you're a reliable customer or one with the ability to brutally murder her.

BIOGRAPHY: Backstory: Taken under the wing of Holg Dimatrist, an honorable but grizzled Bounty Hunter working inside with law. Trained under Holg for 3 years on various different worlds; mostly outer-rim. Nova is detained by the Governor of the system. Apparently Holg had been a thorn in this man’s side for years. So under threat of death she is forced to hunt down her master, which she does. But when she found him, she explained what had happened. They devised a plan of deceit, which got Holg off world without a shot being fired. Nova brought the governor a bloodied helmet belonging to her master. He was pleased with it and spared her life. Nova was quick to leave the system after all this. And she's yet to see her old master since.
Nova being forced to go solo had a hard time garnering work for herself. It was a simple issue of networking that solved that issue. Once she got her name out and of course joining up with the BH Guild; work was readily available. She generally worked for the less than savory types the most, that being Sith's, Hutt's and on rare occasions Mandalorian's. These factions tended to care less what got wrecked and just that the target was dead or captured. All the more fun for her.
Currently seeking out work through the Bounty Hunter's Guild and Sith connections. 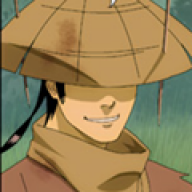 Character Bio
Wow. You're almost as imposing as the Guildmaster. That's a compliment, believe me.
You must log in or register to reply here.
Share:
Share
Menu
Log in
Register
Install the app
Top